The third city I had the opportunity to visit was Dresden – the capital of Saxony, in southern Germany, which has an inspiring story of hope and tolerance, when it comes to heritage preservation and a post-war reconstruction. From its beautiful gardens over the Elbe river to its magnificent brick and wood-framing buildings, there is a lot to see. Founded by the Margraves of Meissen in the 13th century, it was based on a stereotypical plan of central Europe – a rectilinear street system disrupted by a main market square. 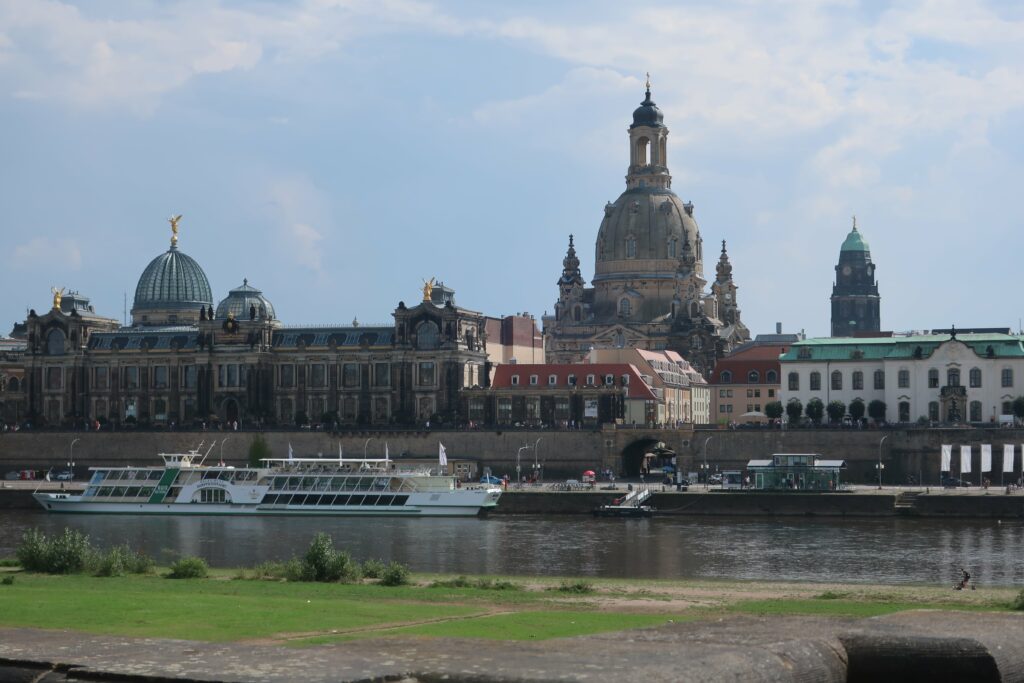 [The skyline of the historical district of Dresden]

August II (1670-1733), an important saxon, left a big impact in the physical city. As a lover of the arts and architecture, he turned Dresden into a major cultural center, by attracting many international artists and commissioning lavish baroque palaces that form(ed) the iconic ensemble of the city’s downtown.

Dresden is not a World Heritage City but it was an unmissable stop between Berlin and Prague, as it shows the will of a people to safeguard its cultural heritage, shows how long-lasting the effects of war are in cities and helps showcase the diversity of urban and architectural heritage safeguarding strategies adopted in Germany after WWII, as local contingencies varied in a divided country. 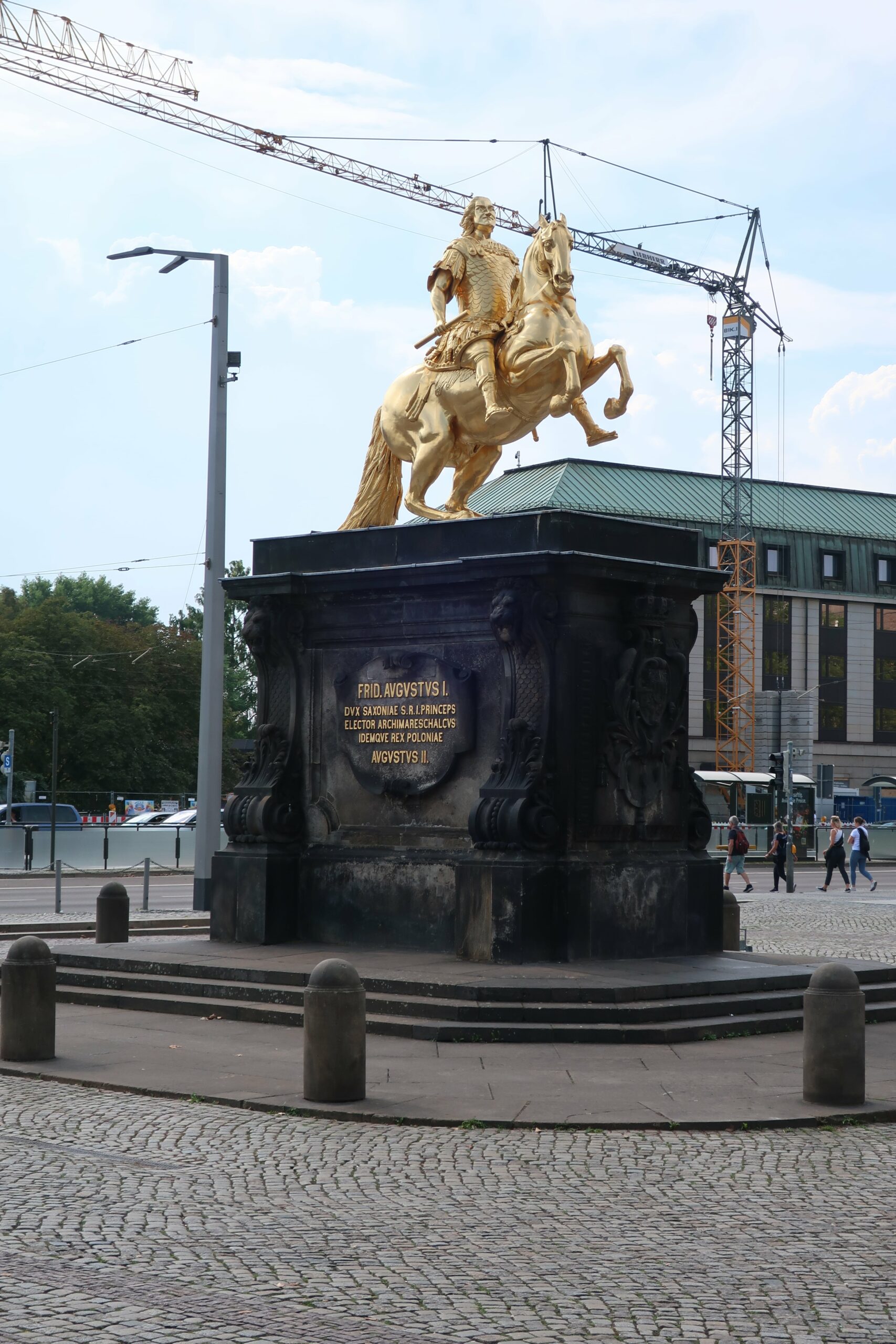 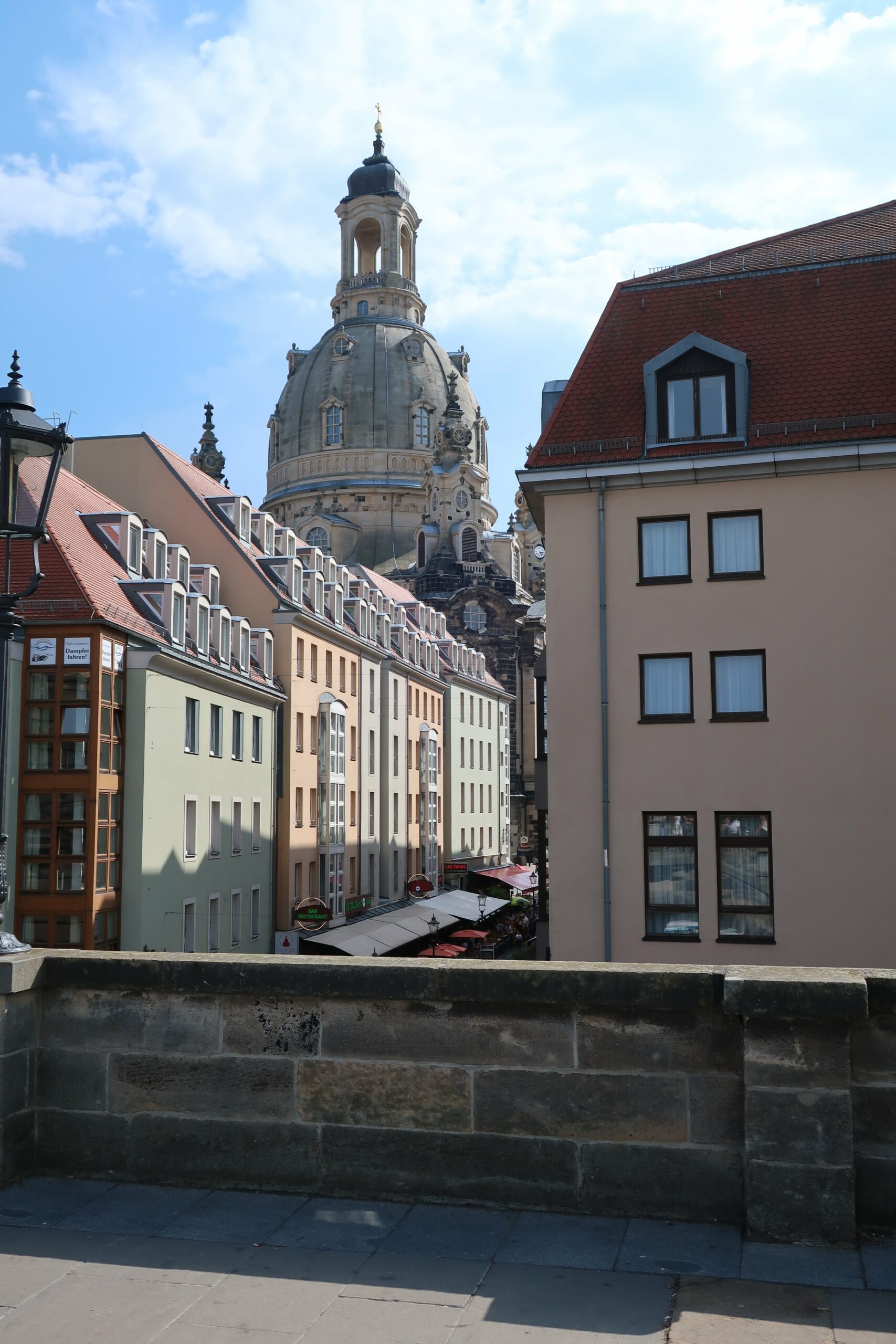 [The statue of August, the Strong in the new district, and a new building contrasting with the historical reconstruction on the orher side of the Elbe]

In one of the most aggressive air offensives by the Allies, Dresden was heavily devastated on 13-14 February 1945, in a raid that had little military purpose and aimed to weaken Germany by the end of the war, killing many civilians and obliterating a symbol of German culture. Under soviet-influence after WWII, the strategy to rebuild the city was first oriented in a way that aimed to evoke the ideal socialist society, but the significant amount of rubble – as Dresden was one of the German cities that faced more destruction – and the financial challenges of German Democratic Republic (GDR) in the decades to come, made the process start late and see guidelines change often, resulting in a significant loss of the city heritage landmarks.

With only one day to visit Dresden, my day started with an Eierschecke – a local sweet speciality made of three layers: cake, quark cheesecake and vanilla custard- , offered by Felix, a local history teacher that kindly hosted me and gave me a small welcome tour. As the newer and the older parts of the city are divided by the Elbe river, we crossed Augustusbrücke, one of the oldest long-standing bridges in Germany, responsible for connecting important trade routes since the medieval period. 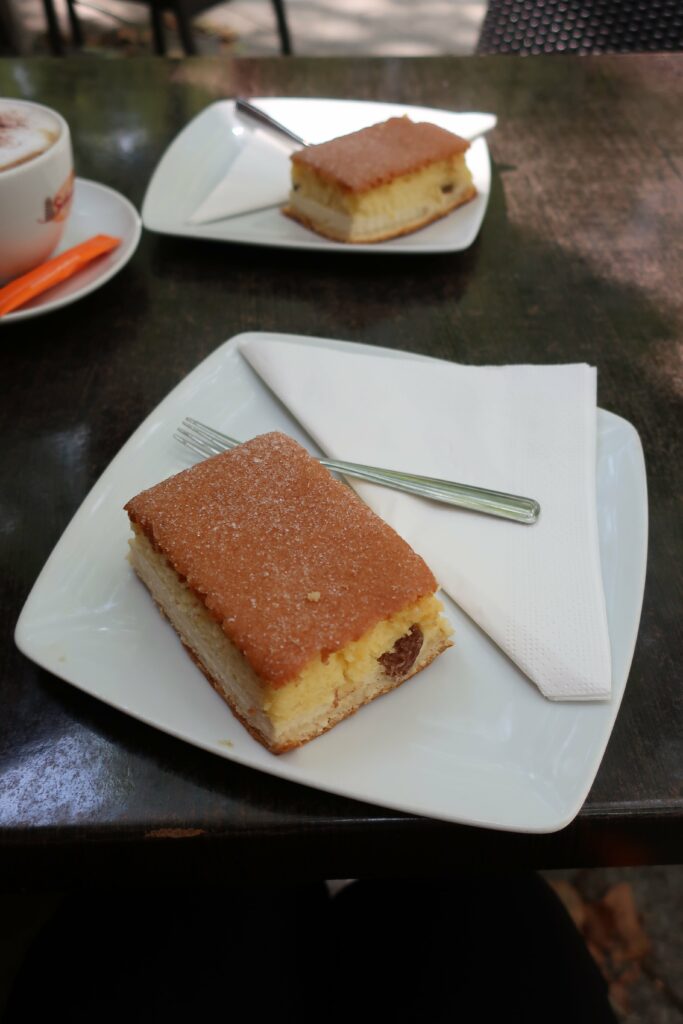 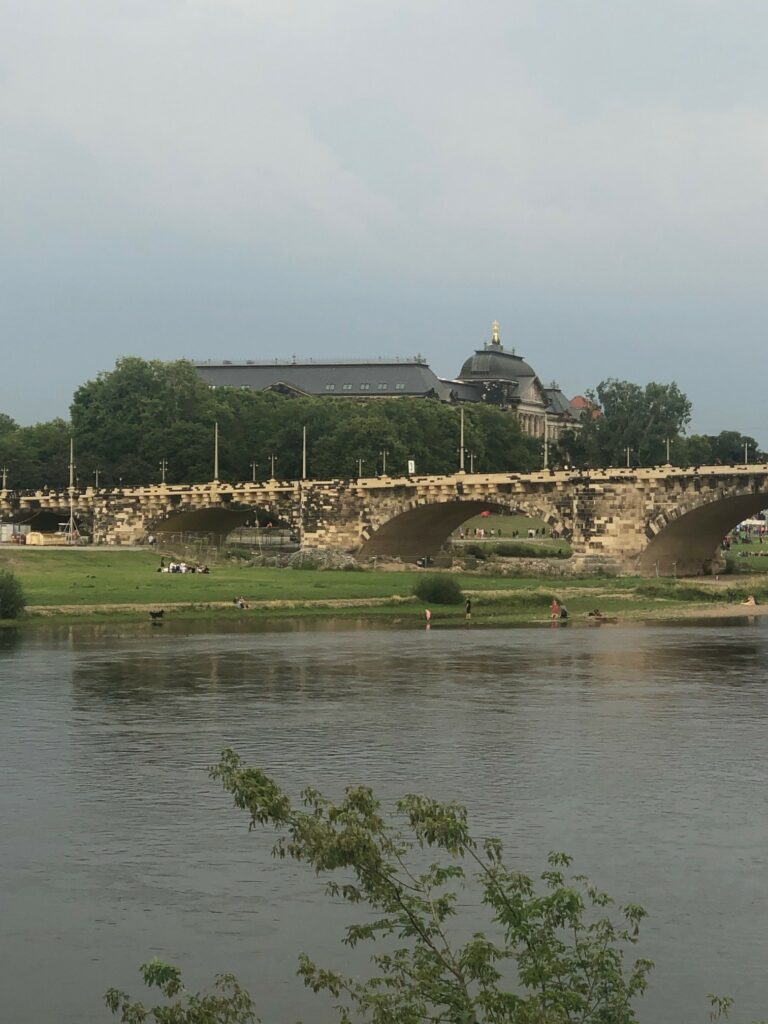 [The sweet Eierschecke / The Augustusbrücke, rebuil using a similar approach to the one used in the Frauenkirche: burnt stones were recovered from the river and reused]

At first glance, it might seem that the contemporary skyline of the old town does not differ much from what we can see in Canaletto’s veduti dated from mid-1800’s but, in fact, before the war the city had already seen major alterations during the 19th century and some key baroque landmarks ended up never being reconstructed after WWII.

On the other side of the bridge, one is welcomed by a big gate, leading into the historically reconstructed part of the town. But first, one both sides of the street there are two spots worth a stop. On the left, the Brühlsche Terrasse, a garden originally private and built by a count between 1739-1748, that now allows everyone to admire the beauty of the Elbe’s banks. And on the right, near the Katholische Hofkirche, the Napoleon Stone, marking the spot where the emperor paraded his troops before an important victory during the Napoleonic Wars. 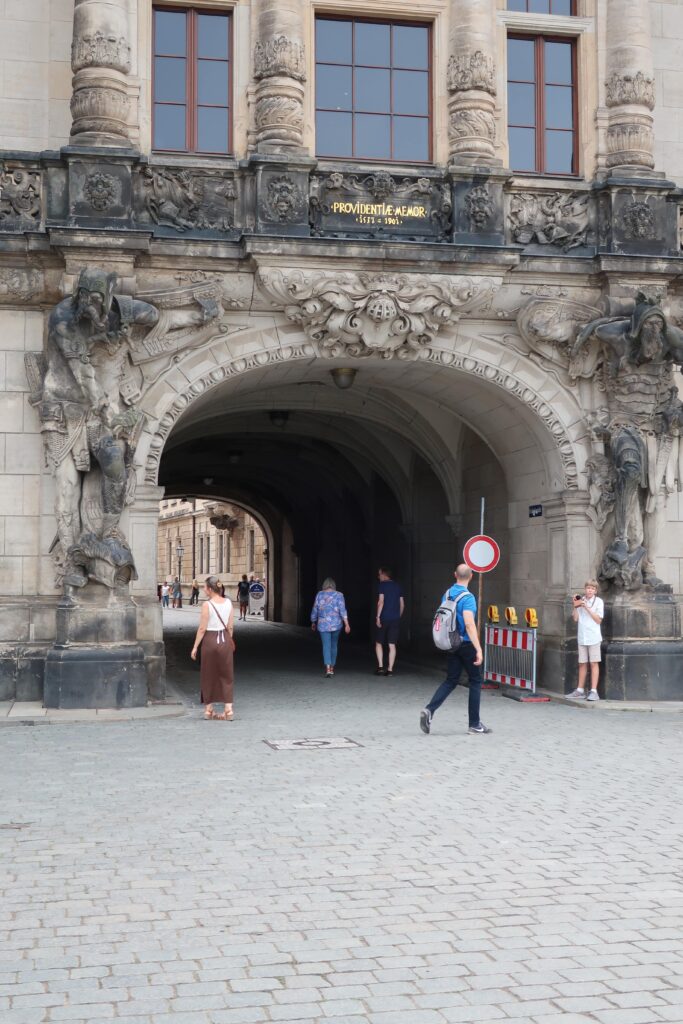 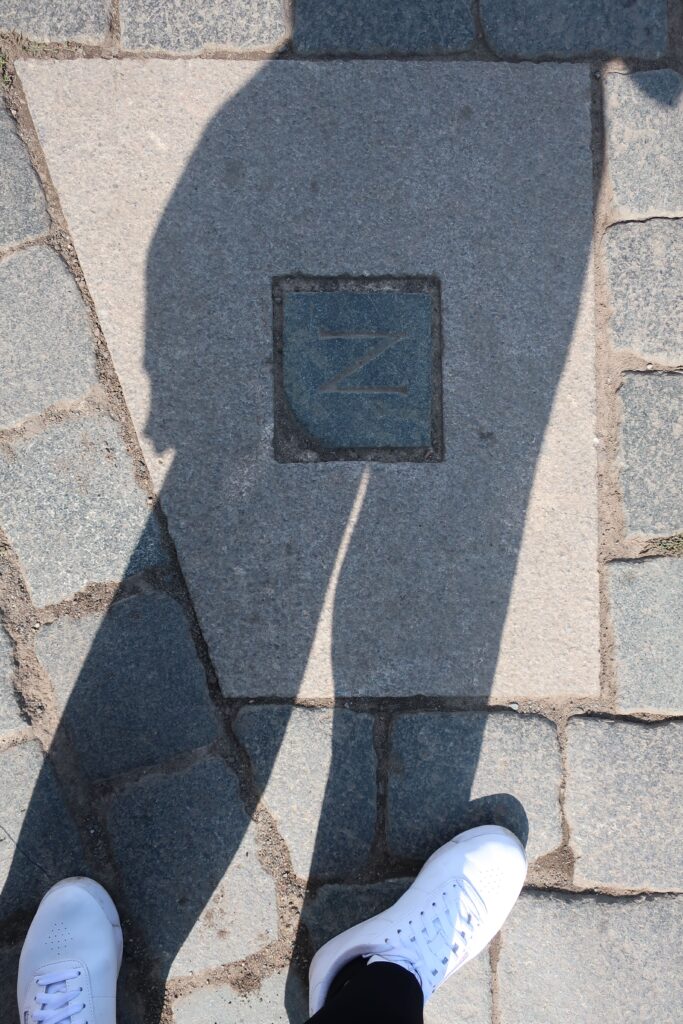 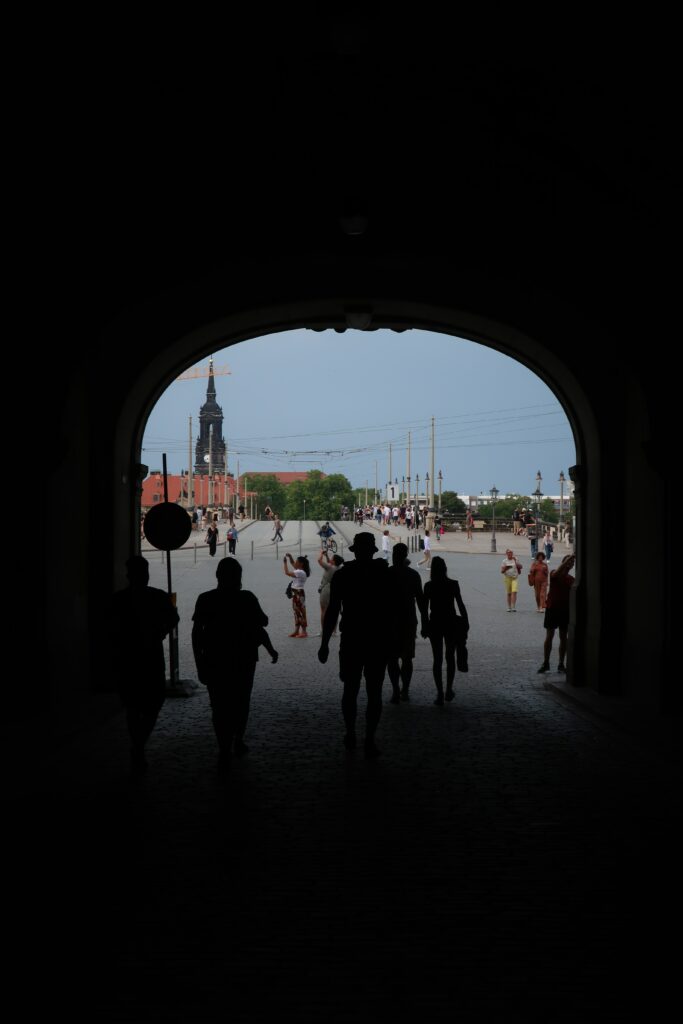 [The entrance to old Dresden, from the opposite view points / The Napoleon Stone]

Continuing through the organic urban fabric, one stumbles upon the Fürstenzug, (“Procession of the Princes”), a mural with 102 meters and circa 23 000 Meissen tiles, produced in Saxony – the largest porcelain one in the world. It depicts the Wettin dynasty, the historical Saxony ruling house and was done in the 19th century as a way to celebrate its 800th century. Meissen porcelain, also known locally as “white gold”, can be recognized as authentic by displaying two crossed swords inscribed. 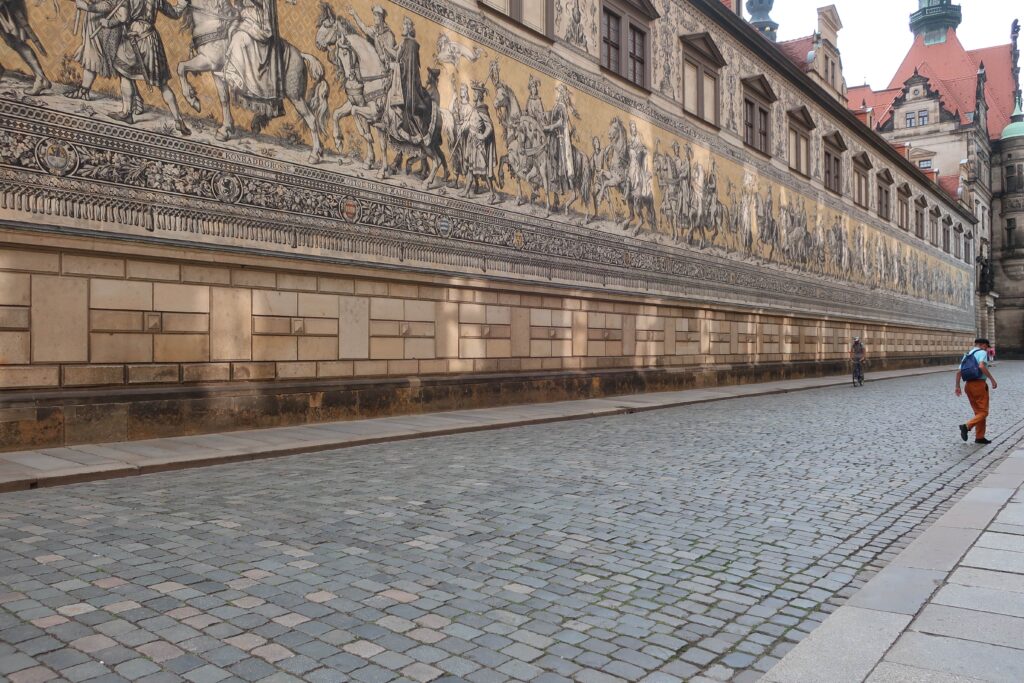 Then, we passed by the Neumarkt, where the rebuilt Frauenkirche stands, to quickly be faced with the contrast embodied, only a couple of hundred meters away, by another square and another public building, from a different period and built upon a different ideology. The Kulturpalast, in the Altmarkt, faces a main, large avenue. Built during the communistic period, still to this day, it is used as the library and concert hall of the city. On one of the exterior façades, one can admire the mural “The Path of the Red Flag”, a propagandistic mural completed in 1962, that aims to portray the history of socialism. Felix told me about the Trümmerfrauen depicted; women that have been elevated to national heroes all over the country, as they are celebrated in many paintings and sculptures. After WWII, there was a lack of construction workers due to displacement and war losses, so women volunteered or took very poorly paid jobs helping clearing the rubble and sorting amongst it the materials that could be reused. According to the available stats, they were not as many as the memorials might have made us think they were, but they hold for sure a symbolic role in German reconstruction and heritage safeguarding. 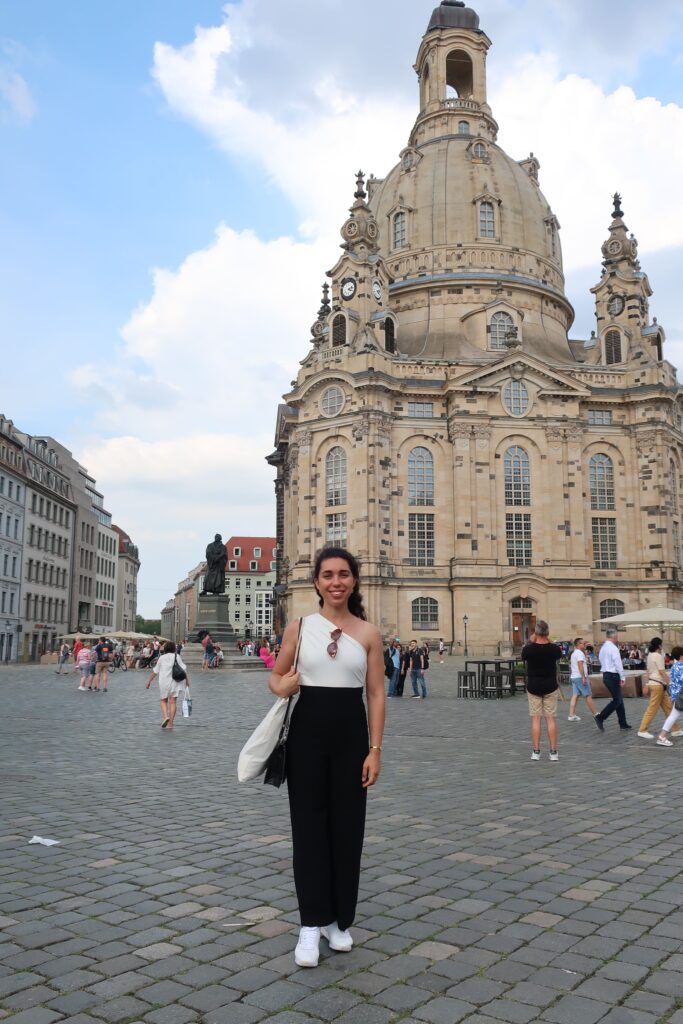 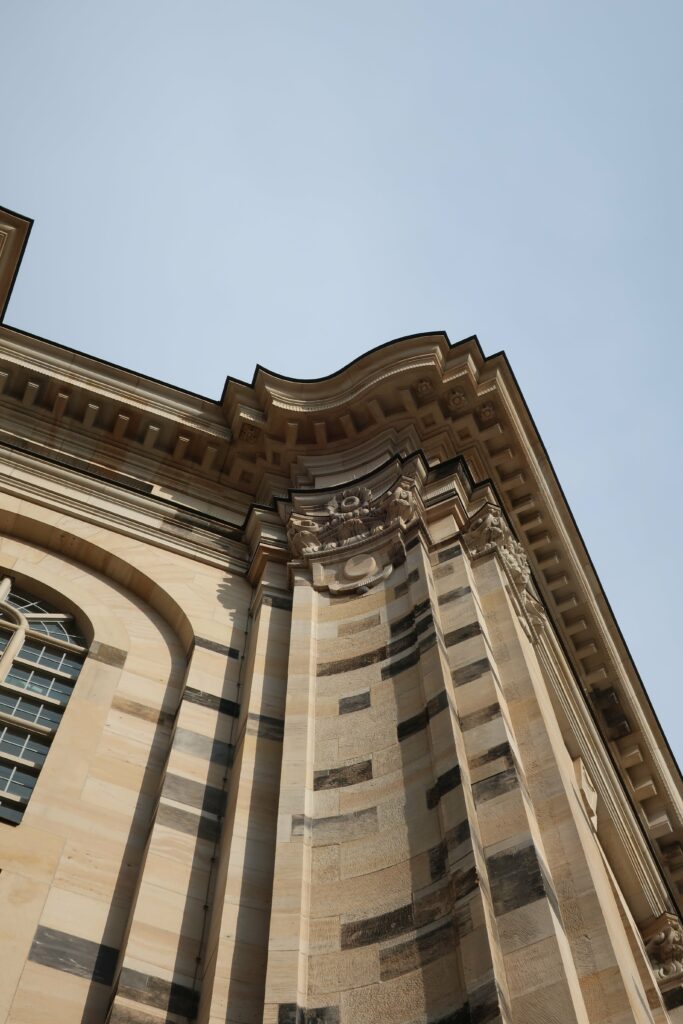 [The Frauenkirche / The contrast between old and new stones ]

In the afternoon, I walked around the Zwinger Palace and the Semperoper, iconic baroque buildings of the city, heavily damaged during the war, but repaired and reopened. As the sun was setting, I catched a tram to an area further away from the historical center, to see one last heritage jewel: the traditional regional timber-framed houses, in the Loschwitz district. I was told that this common local typology was also very common in the old town back in the day, but that after the fires that destroyed the city after WWII’s bombings the majority of them burnt down. They still can be seen in the outskirts of dresden and are a beautiful example of local heritage and craftsmanship. 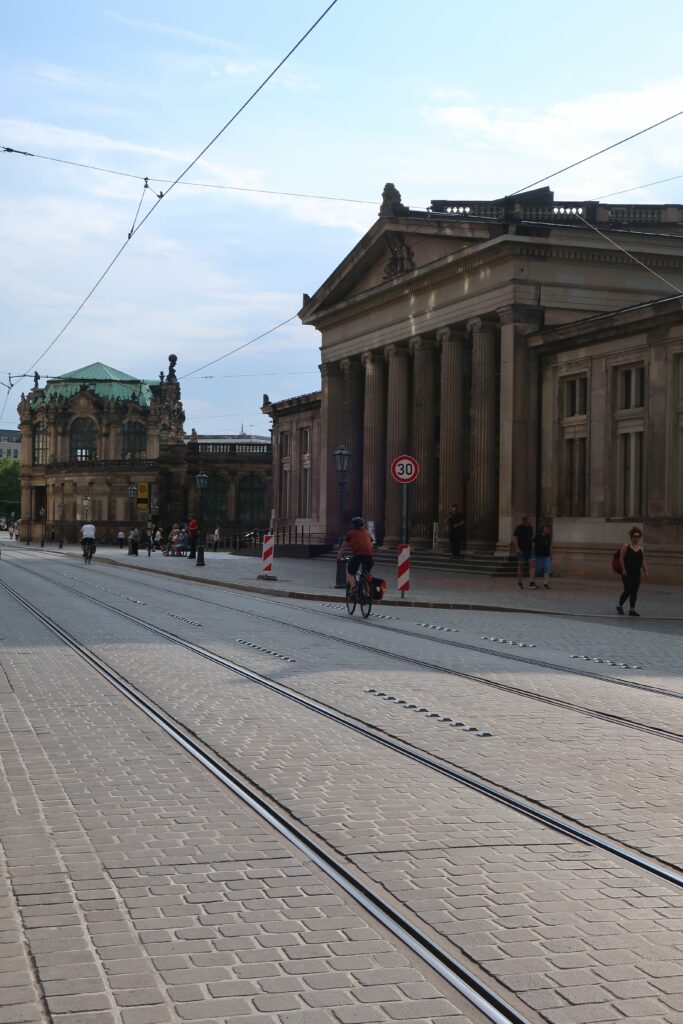 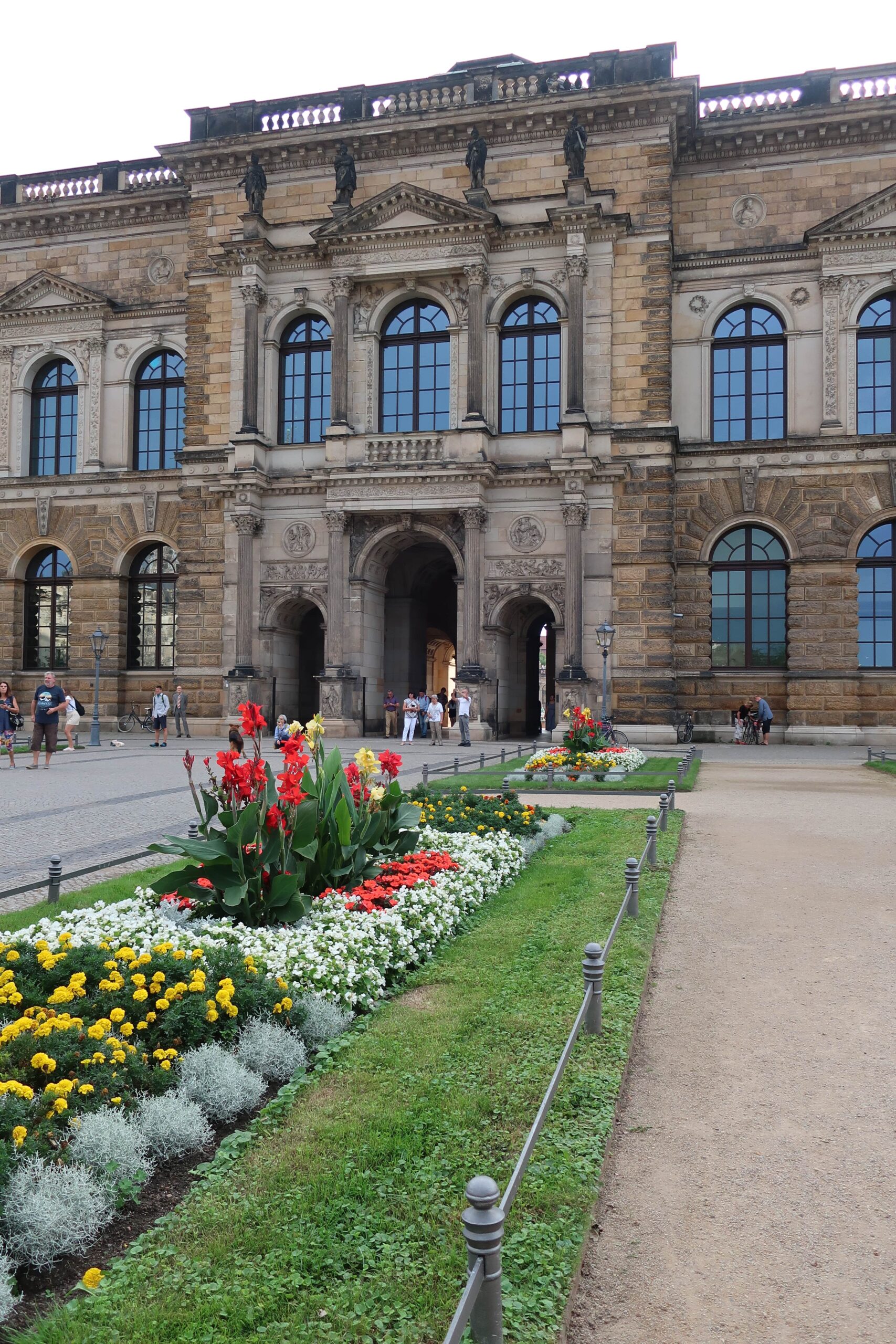 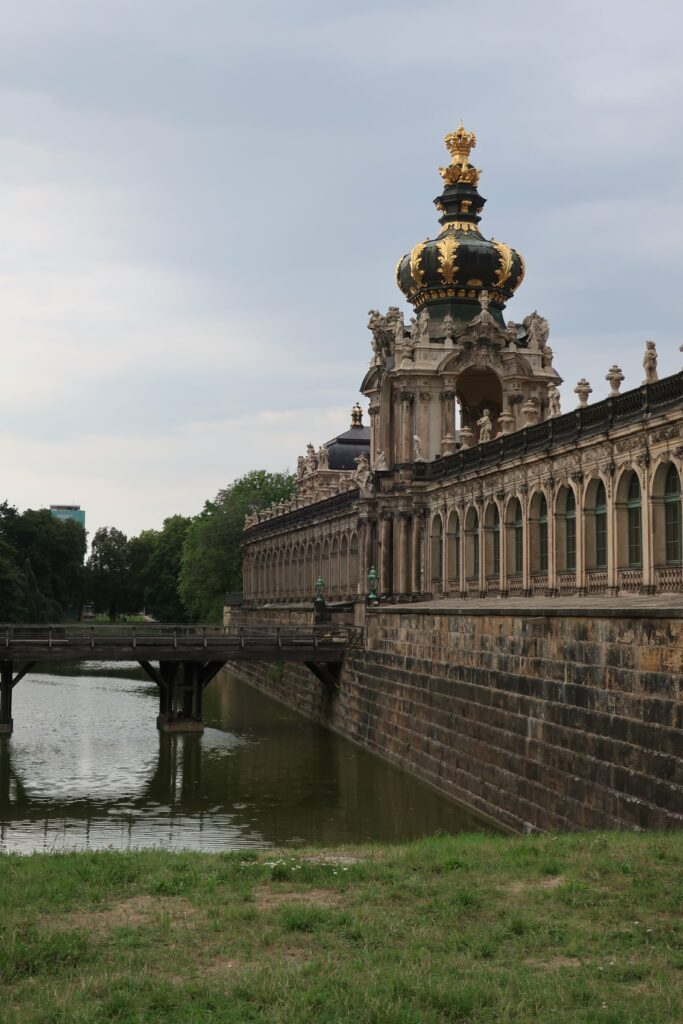 [The Semperoper and the lavish Baroque of the Zwinger Palace]

After more than seven decades, Dresden, in a major parto due to its people’s will, is still rebuilt itself, even after many demolitions post-conflict and heritage loss due to lack of political decision. Following an historical approach of building come era, dov’era but without eradicating fully all the periods of history the city faced, as darken stones punctuate buildings everywhere we look, the city is a great example of how heritage can foster togetherness and urban vibrancy. 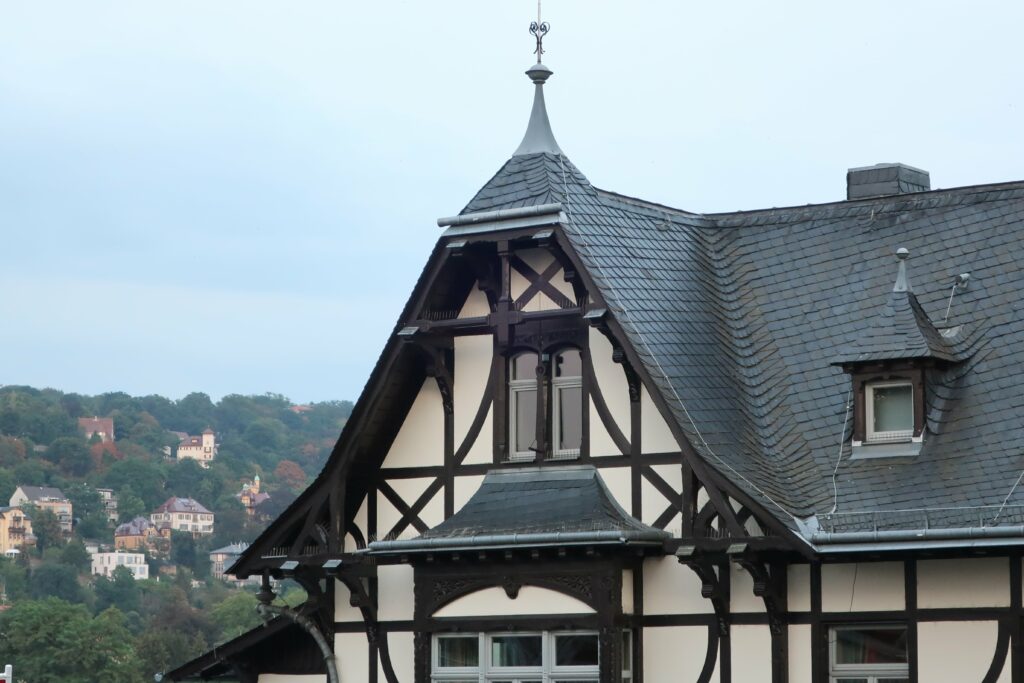 [Timber-framed houses, in the Loschwitz district]

In Neumarkt, where, quarter by quarter baroque buildings have been reconstructed for decades now, this Lutheran church, a major symbol for Dresden, was built in the 18th century. During the aerial bombing of Dresden, a fire made its dome collapse. After many decades of abandonment, as the GDR struggled to decide on the approach to rebuild the old center of Dresden, it was only rebuilt from the mid-90’s according to its original plan, after the famous “Appeal from Dresden”, a popular appeal that aimed to end years of indecisiveness. 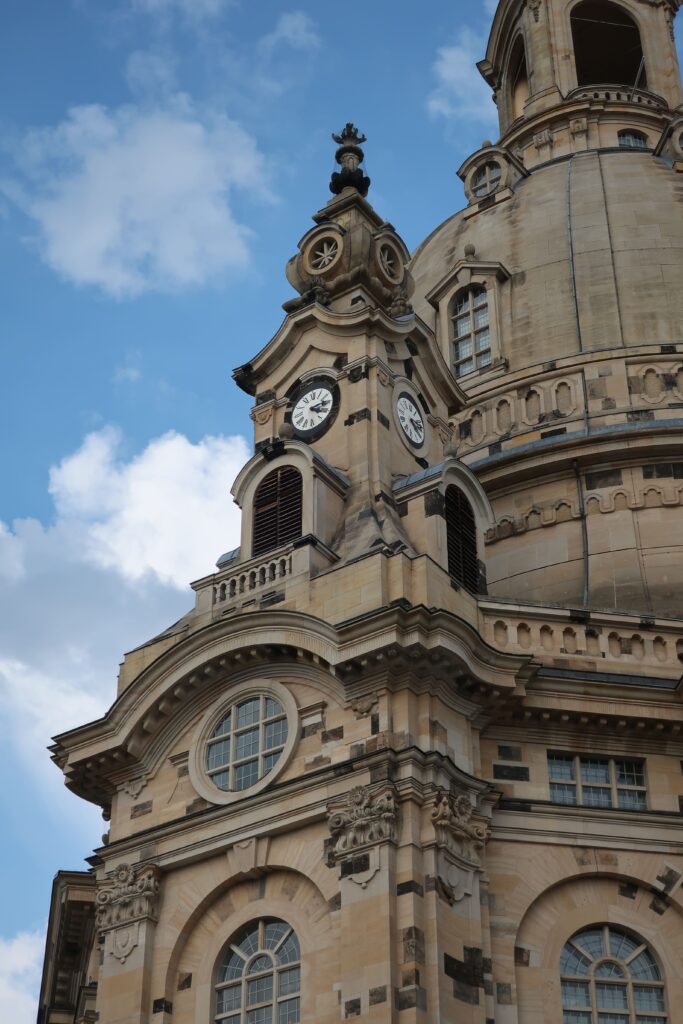 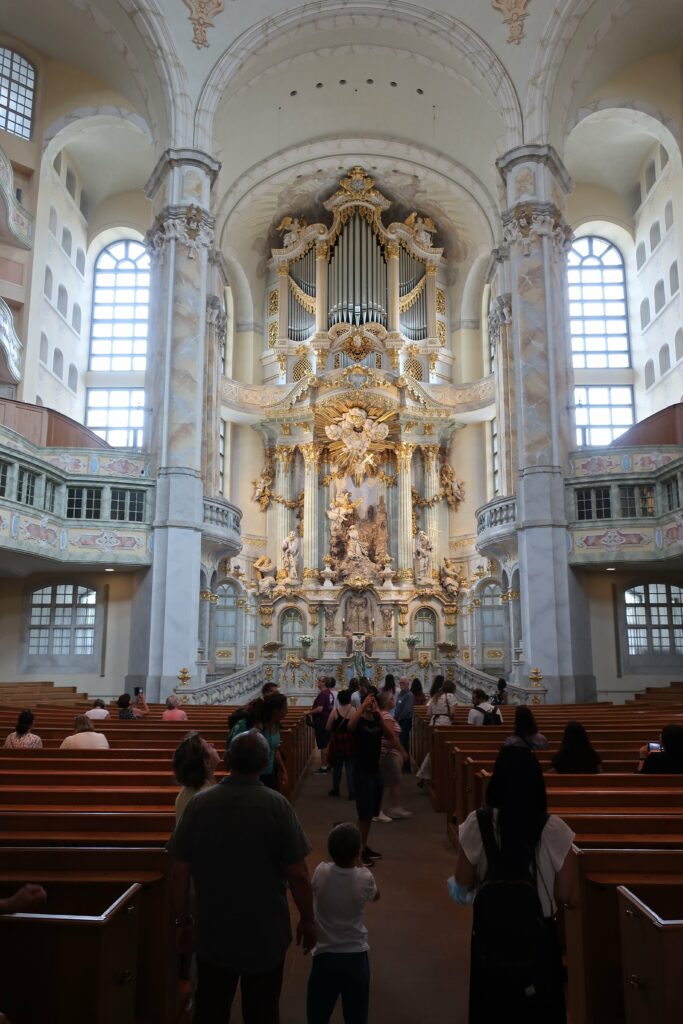 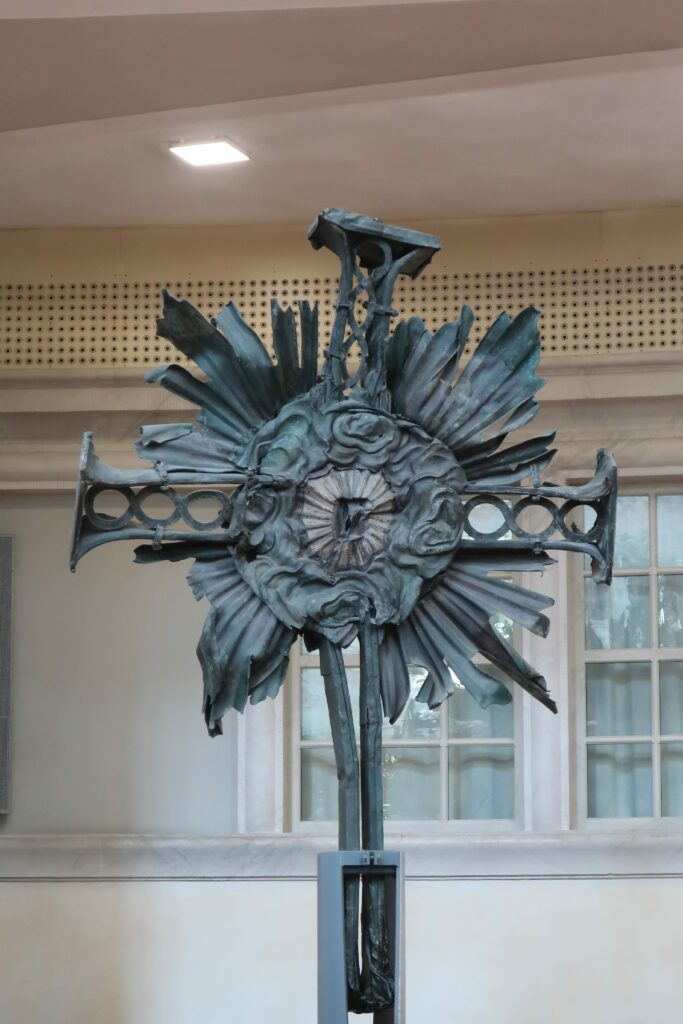 [The exterior / the interior of the reconstructed church / a metalic cross from the original building burnt during the fires following the bombing, recovered from the rubble]

The numerous private donations helped start the reconstruction of this big landmark of hope, finally finished in 2004. Even if the exteriors and interiors aimed to match as much as possible the original George Bähr’s plans, traces of the scars left by the conflict still remind visitors of the tumultuous times the structure and the city faced:  the original stones found in the rumble were used whenever possible, in their exact original position, contrasting with the newer ones, not darkened by the fires.