Though I have been visiting Paris many times, I have heard about the mystical place Fontainebleau, but never managed a visit!

While approx. 1 hour away by public transport from Paris, Fontainebleau remains a hidden gem and is barely crowded. 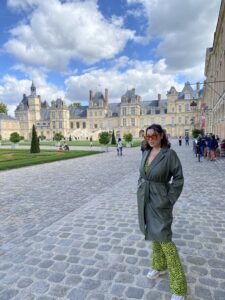 The main attractions of this cute little world heritage town are the Palace and Park of Fontainebleau.

While I am not most intrigued by French royalty, this castle has much to offer just by looking at its 800 years of history.

With over 1500 rooms, it is the second-largest castle in France and extremely rich in history!

Yet, Napoleon I himself:

“breathed new life in Fontainebleau after the Revolution. Visiting the château he restored, furnished and inhabited, you uncover the statesman, the military leader, the family man and the patron of arts.” There is also the only still-existing throne room of Napoleon.

Walking through the château, the zeitgeist of its past set me in awe. In comparison to Versailles, the castle is much fewer glamours and kitschy but more “practical” Hereby I want to showcase my favorite room of the palace which was the palatial library. 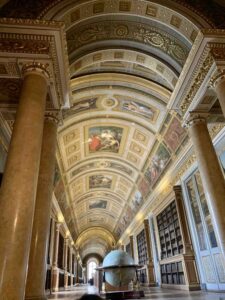 In addition, the palace and its surroundings are huge and I believe 1 day is not enough to study them with the care the place deserves: 130 hectares of parks, courtyards, and gardens of the Château de Fontainebleau Equally, I experienced the park to be truly magical and inviting to have a picnic, and do sports, amazing even some visitors have been picking mushrooms in the woodlands – many practical dimensions of a world heritage site 😀

The Fountainebleau forest with a surface area of state-owned woodland measures more than 22,000 hectares! Yet, I have to admit that I felt the cultural activities planned were barely targeted at a younger audience. Despite the presence of the Ranked #1 European Unicorn University INSEAD, we barely note “young faces.”

Talking to the receptionist in the visitor center, she remi

nded us about the importance of the awareness of world heritage.

Fountainebleau is the ideal place to daydream about the life of our ancestors and feel like being part of it at least for a day and coming back to the busy streets of Paris.

Yet, Fontainebleau is not an alternative to Versailles, but much different and an ideal gateway for a deep dive into french royal history, heritage, and nature.