I arrive in Kráľová sooner than expected. I had hoped to stop a few times in the Tatras (the mountain range separating Poland from Slovakia), but everything is covered in fog, and getting out of the car means standing in a cold drizzle. It’s impossible to know if the sheep that emerge from this fog are white or grey or black, so caked are they in mud. They enter the fog again quickly, as if they had been forced out against their will.

I meet a friend of mine from Vienna at the station in Zvolen, and together we drive up the mountain, park the car, and walk up a steep, muddy road to a little cabin we’ve rented. We spend a weekend there sitting by the fire, walking in the surrounding hills, and collecting rose hips for rose hip soup. I catch up on washing and sleep. I read too many articles about Putin and the war and try to wash them from my mind with some of Milan Šimečka’s beautiful recollections of home and everyday life in “Letters from Prison.”

In Král’ová, the animal population far outnumbers the human one.  Among its animal citizens: cows with big, wet eyes, sheep that sniff at the car, cats that scratch on the windows at night, and horses that growl like dogs and pace the fences. Among it’s human citizens: a few old shepards, a small family, and our next door neighbours, who are friendly but preoccupied. They tend to their cows and shake apple trees full of dark, shiny apples. A black dog with a red cast hops after each falling apple and tries to catch it in his mouth.

On Saturday we make our way slowly down the mountain, which has been cut up by the rain and is covered with flattened , speckled frogs. We drive towards Banská Štiavnica, an ancient mining town built in a crater of an ancient volcano. We visit the well-preserved old new castles (built in the 13th and 16th centuries) and walk through the steep, crowded cemeteries on its ridge, which are covered in flowers unlike anywhere I’ve ever seen (John Berger writes about Slovakia’s special relationship to the dead as captured by Markéta Luskačova in his essay ‘Christ of the Peasants’). Down in the valley we find a little white windowless restaurant where we eat halušky and cabbage soup and flip through Slovak tabloid magazines.

After our late lunch, we decide to visit the Kalvária, a little red shrine on a hill that we spotted from the New Castle. The way up is a Via Crusis: a series of stations telling the story of the crucifixion. In this case, the stations are little cheerful yellow huts with wooden reliefs inside, only most of them have been moved to the museum and replaced with cardboard cut-outs due to vandalism after the nationalisation of the Kalvária in 1950.  Standing in front of a damp, two dimensional cut-out of Jesus carrying his cross, I  cannot help thinking of the flattened frogs on the mountain road and I’m filled with pity for human and animal suffering alike.

The Kalvária is clearly cared for by the community: its walls have been freshly painted, there are apparently masses held there from time to time, and visitors,  even on a rainy Sunday afternoon. The white steps up to the shrine have been washed by the rain and look brand new. My friend and I stand on them for awhile and look down at the darkening city, where lights are coming on one by one and where chimneys billow wood smoke, which blows to the west.

Built in the 18th century, the Kalvária is young by Banská Štiavnica‘s standards. The hill, however, is old, and I’m sure that long before anything existed on it, people have climbed it to gaze upon the same surrounding hills and imagine a fortune in silver. I think of a poem by Walter de la Mare:

Slowly, silently, now the moon
Walks the night in her silver shoon;
This way, and that, she peers, and sees
Silver fruit upon silver trees…

On our way home through the hills, we drive by an abandoned black mineshaft and some empty mining settlements, and decide to park the car and take a look at them. We realise quickly that they aren’t empty at all— that Roma families live in them. There are children playing around the mine shaft and rolling down the road on bicycles. When they see us, they run behind the columns of the house. One of the youngest boys, tiny and wearing a red sweater, steps forward and calls out to us first in Slovakian, then, when he realises that we’re foreigners, Romani. Whatever he says make the others giggle. The columns seem to shake with laughter. The whole building is at a tilt, and seems to sink into the mud before our eyes. The windows are mostly dark, and it seems as though a pair of eyes peers out from every one. 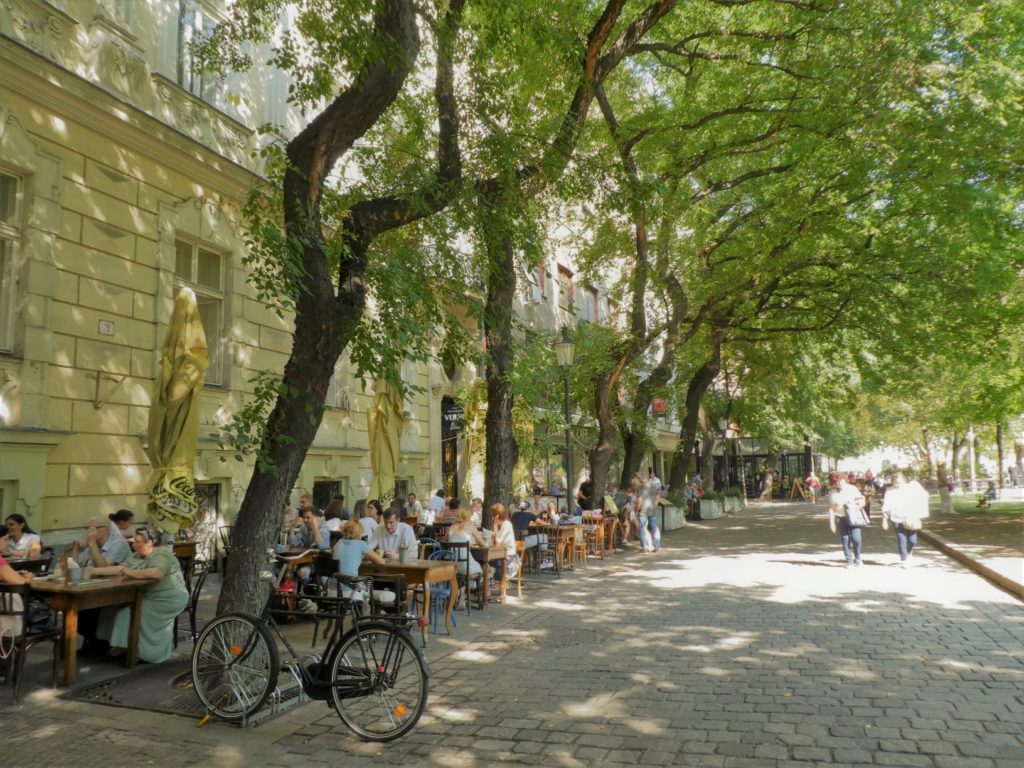