After being almost entirely and intentionally destroyed by the Nazis in response to the Warsaw Uprising of 1944, the Old Town of Warsaw has been reconstructed. To an untrained eye like mine, it cannot be distinguished from the well-maintained old town of say, Prague, which managed to come out of the war comparatively unscathed.

The people of Warsaw are proud of their Old Town: every time they catch me wandering into an outer district they seem confused and point me back in the direction of it. Stare Miasto! Stare Miasto!

This pride is more than understandable. The history of their city (and their country) is a never-ending story of occupation and destruction. So rebuilding an entire part of the city that has disappeared and claiming back the right to one’s own past is a form of resistance and admirable stubbornness. It’s the very same stubbornness that I’ve seen in the faces along the country roads that lead to Warsaw.

In the old town, next to a small side street where a black carriage horse is sleeping, a hat seller waves me over. He smiles and reveals one long, yellow tooth. He tries to sell me a fur hat. They are beautiful, but I already have one at home in Canada, I tell him. He doesn’t understand English, so he takes my hand and leads me over to his neighbour, a young woman selling magnets. She translates for us. Canadians are some of my best customers, he says. Much better than the Spanish.

The Spanish generally don’t have a great need for fur hats, no?  He considers this for a moment, shrugs, and pulls out his identification card. He points to his birth year: 1935. Then he pulls a calculator out of his pocket and punches in his age: 87. Wow, I say. He passes me the calculator and I punch in my age. Wow, he says. Then he takes his age, and minuses my age from it. We both marvel at the number. We stand, grinning at each other and not saying a word. Then we shake hands and part ways.

Muranów was once home to the Jewish ghetto. 460,000 people lived there. 390,000 of them were murdered. 460,000 minus 390,000 leaves 70,000. Nowadays in Muranów there are some Soviet-era apartment blocks, unassuming parks, and small restaurants. I takes me a good half an hour to find the synagogue (the only remaining pre-war synagogue in Warsaw) but I finally find it tucked in between a parking lot and some new glass buildings.  Nobody is around, and the synagogue is locked. The only person that I’m able to find is the old owner of the kosher grocery store. He wakes up when the door jingles open and greets me in Hebrew, Polish, and English. He reminds me that it’s Rosh Hashanah. Then he nods off again. His eyes are tiny and distant behind a pair of the thickest glasses I’ve ever seen.

“We reached Krochmalna Street and the stench I recalled from my childhood struck me first— a blend of burned oil, rotten fruit, and chimney smoke. Everything was the same— the cobblestone pavement, the steep gutter, the balconies hung with wash. We passed a factory with wire-latticed windows and a blind wall with a wooden gate I never saw open in all my youth. Every house here was bound up with memories. No. 5 contained a yeshiva in which I had studied for a term. There was a ritual bath in the courtyard, where matrons came in the evening to immerse themselves. I used to see them emerge clean and flushed. Someone told me that this building had been home of Rabbi Itche Meir Alter. In my time the yeshiva had been a part of the Grodzisk house of prayer. It’s beadle was a drunk. When he had a drop too much, he told tales of saints, dybbuks, half-mad squires and sorcerers. He ate one meal a day and always (except on the Sabbath) stale bread crumbled into borscht…”

(An excerpt from ‘Shosha’ by Isaac Bashevis Singer, translated from the Yiddish by Joseph Singer.)

Krochmalna Street has not been rebuilt. How could it? In order for something to be rebuilt its inhabitants need to say: we survived, we remained, we want to fill this place again. But in this case, the people are gone and so is Isaac Bashevis Singer’s Krochmalna Street. At one end of the street there’s a tiny, dirty patch of grass (apparently a park) named after the author. At the other end, the only remaining old building stands with boarded-up windows. Between these two ends, modern buildings have popped up beside ones from the fifties and sixties which are starting to turn grey. I find this street unbearably sad and move along.

In the marketplace next to Hala Mirowska, vendors sell plums, raspberries, massive bunches of dill, mushrooms fresh from the forests, dried, fragrant fish and pastries. It’s so crowded that it takes an hour for me to move from one end to the other. Despite this, it’s quiet. Everyone seems to speak softly. (Or perhaps I’m only remembering it like that.) The sun shines in its mild autumn way, and everyone seems to be in a good mood. The vendors are nimble, curt. They do not need to shout or advertise their goods. They have built up reputations for themselves which long line-ups at each stand attest to. Plums which are mouldy or otherwise unacceptable roll about on the ground and are stepped on, releasing a wonderful smell.

An old man steps out of this jostling, whispering mass of people and comes towards me. He is wearing an old black leather jacket and a black beret. His eyes are sharp and full of good humour. He stops before me, bows deeply, says, Welcome to Warsaw, and then continues on his way. It feels as though the city itself has sent me it’s greetings.

I somehow manage (don’t ask me how) to get some address mixed up and accidentally end up in a cellar where a metal band from Mumbai are playing. The band and the crowd are so likeable that I end up staying for awhile. I’m not at all dressed for the occasion (a beret, hiking shoes, and red lipstick) but everyone is forgiving. Warsaw, you’re incredible, they say between songs. You all have so much energy. We’ve never seen anything like this!

It turns out that they are only the opening act, and that a band from Budapest are the real stars of the evening. They open the evening with a song called “Holocaust.” Let us make sure that it never happens again! They say before they begin. To my untrained (and very sensitive) ears, it sounds like one long, sustained scream, and I have to be honest, it’s one the most articulate things I’ve ever heard on the subject.

I take the tram back to the Soviet-era walk-up that I’m renting in the suburbs. I brush my teeth in the tiny kitchen. My neck is stiff, my face is irritated (by being whipped by some long hair), and my ears are ringing, but I’m happy.

On Sunday, the same day as Rosh Hashanah, Warsaw celebrates the Patron Saint of Warsaw, Saint Wladyslaw from Gielniowo. On top of that, the Warsaw Marathon is happening, and many major streets are closed. Despite this, I somehow manage to get to the Przy Bażantarni Park in the Natolin district, where there is a kind of fair. The air there is filled with the smell of sausages, candy, fried potatoes and Polish music. There is a makeshift dance floor, and it is full with the very old (who know all the words and mouth along) and the very young (who know neither the steps nor the words). As the afternoon goes on, they are joined by mothers, fathers, and even a group of teenaged girls, who giggle nervously.

As with many parts of Warsaw, Natolin is full of hurriedly (and notoriously badly) built grey apartment blocks that loom around and press in on the park, but as with the other districts, they seem to shrink next to the people of Warsaw, who are warm, stylish, and unpretentious. (I like them very much.)

A trumpeter from one of the bands that are playing sees me standing off to the side, tapping my foot along to the music. He asks me if I’d like to dance. I say yes, and we go spinning around the stage to the music of the Warsaw-Lublin Brass Band. He patiently teaches me some of the traditional dances (which are making a comeback among young Polish people) including the so-called “small waltz.” It’s not like the Viennese Waltz, he says. You have to move your feet very quickly and very little. Imagine you’re dancing in a little box.

A waltz perfect for the tiny kitchens of those grey apartments, I think to myself. 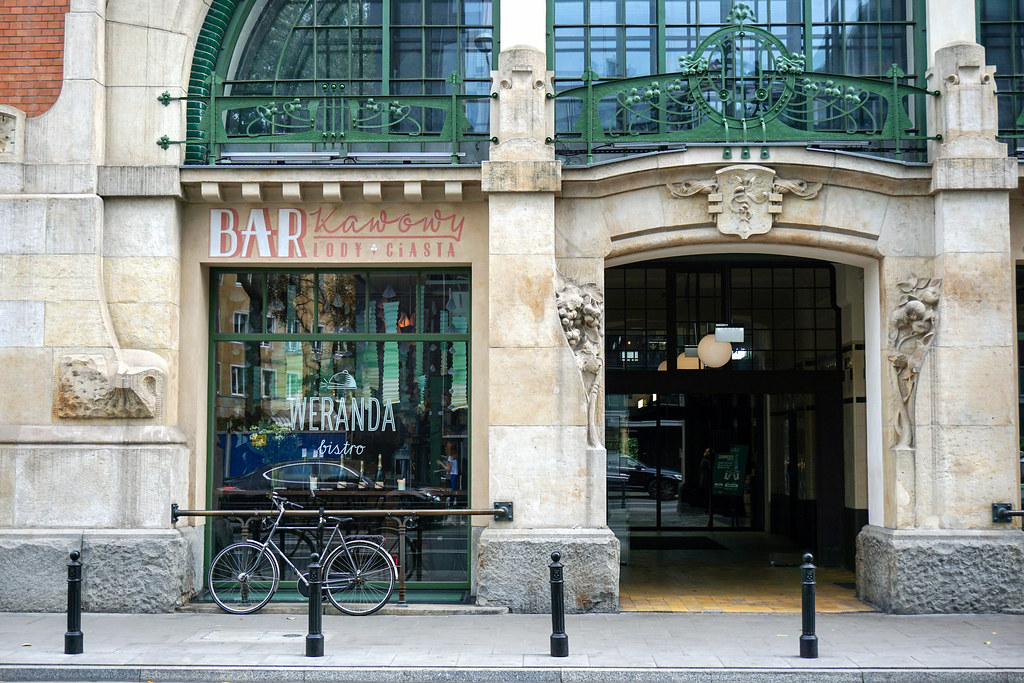 On Monday 10th of September we started our two weeks journey within OWHC Scholarship. During this trip we will discover Young and Modern Life in World Heritage Central European Cities. We began it in Warsaw – filled with history, being an example of the transition from tradition to modernity. Most of the city was destroyed during the Second World War and – after being reconstructed – it’s constantly changing. END_OF_DOCUMENT_TOKEN_TO_BE_REPLACED