The sun shined high over the canals of Bruges and the scent of chocolate filled the streets of the city. We could not resist long walks through the picturesque streets of the city, stopping occasionally to admire the fairy-tale landscape around us. Immersed in an ancient atmosphere, we photographed the most beautiful sights, sent postcards to Italy, and drank coffee in the shade of a weeping willow tree on the canal bank. 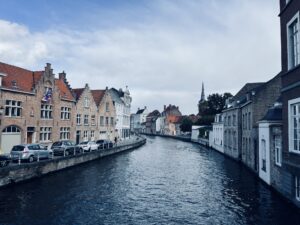 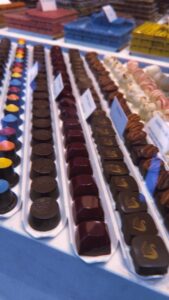 We thoroughly enjoyed the magical morning, before heading to the town hall at 12 a.m. to meet the Climate and Energy Department team. Once we got in front of the meeting point, we were left speechless by the magnificence of the palace facade. The monumental City Hall (1376-1421) is one of the Low Countries’ oldest structures. For more than 600 years, the city has been governed from here. The Gothic Hall, with its impressive vault and 20th century murals depicting Bruges’ history, is an absolute masterpiece. Using original documents and paintings, the adjacent historic hall sheds more light on Bruges’ governance over the centuries. 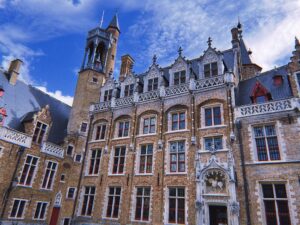 A meeting at town hall

At the second floor of the town hall, we had the honor to talk with Schepen Minou Esquenet, aldermen of climate and energy, environmental policy, smart city and facilities management, and with Leentje Gunst, department head of building design. They explained to us that one of their main duties is to develop a masterplan to manage, preserve and restore more than 500 monuments. In particular, large concentration of monuments causes a huge flow of tourists from all over the world, whose presence undermines the proper physical preservation of places, but also the cultural characteristics of the city. An example of this problem is the emptying out of the center: the inhabitants of Bruges and the typical stores have moved further outside or even outside the city walls in order to be able to enjoy more peace and quiet. Instead, the center has been filled with tourist stores selling low-quality chocolate, souvenirs, industrially produced lace, and cafes with international menus. The historical buildings close to the monuments became mostly airbnb accommodation. That’s why the Municipality of Bruges tries to encourage an overnight stay for several nights in order to promote a visit to the city spread over several days. Moreover, they have taken up citizens’ demands and shaped the so-called golden triangle in which to concentrate tourist attractions so that the rest of the old town is quieter and more livable. In addition to that, Minou and Leentjie talked about their will to regulate the airbnb rentals limiting them to a period of 30 days per year for each apartment.

As had been the case in Amsterdam, here we were shown various problems that arise in trying to improve the sustainability of older buildings. Most of the palaces cannot be subjected to exterior changes because of legislation on the preservation of cultural heritage. The gas crisis is also creating difficulties because the inevitable drop in temperatures inside the buildings could damage artwork, ancient furniture, and the oldest and most delicate architectural structures. For this reason, the municipality has already taken steps to install dehumidifiers in every room. 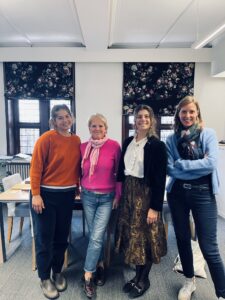 Once our meeting was over, we decided to use our remaining time to visit another place on the unesco heritage list: the Beguinage.

The Bruges beguinage dates from the 13th century, specifically 1245, and is one of the best preserved. The majority of its buildings are not as old, dating from the nineteenth century, but the original layout of the Beguinage has been preserved.

A Beguinage was a community of women who followed the apostles’ example of poverty, simplicity, and preaching. These are lay orders that make no binding vows. They could break their vows and leave the Beguine community at any time. 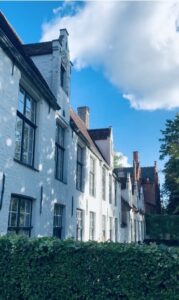 The Beguines were a group of single or widowed women who wanted to live a religious life outside of the confines of a convent or monastery. As a result, many north Belgian and Dutch cities established beguinages where these women could live and pray. The beguines led a hardscrabble existence, earning their living at first with looms. No vows were taken, but they followed a strict regime overseen by a mistress who protected the establishment’s independence. The last beguinage nun left in 1927, and it has since been occupied by a community of Benedictine nuns.The Beguinage is accessed via a small bridge and a gatehouse built in 1776.  The first church on this site was built in 1245, but it burned down in 1584, and the Gothic replacement, built in 1605, was given a Baroque facelift around 1700. It is dedicated to St. Elisabeth of Hungary, patron of many beguinages, and to St. Alexis, reputedly the son of a wealthy Roman family who chose poverty and charitable work over riches: desirable virtues among Beguines. This church is still active, with daily services led by the Benedictine Sisters who live in the former beguinage. Silence is requested, as it is in the rest of their home. St. Joseph is commemorated on the altar to the right. The gilded Madonna and Child below is a Medieval treasure from the chapel: “Our Lady of Consolation” or “Our Lady of Spermalie” dates from 1240. A small museum recreates the living quarters of a beguine in the corner to the left of the beguinage’s entrance. We lit a candle in the church, took a moment of reflection then said goodbye to this place of faith. 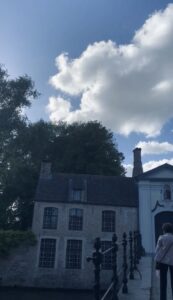 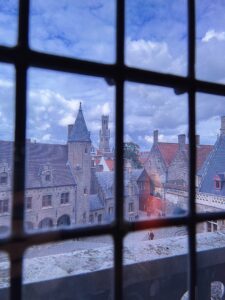 Our time in Bruges was almost over! We went home to say goodbye and thank you to Magdar and Stan, packed our bags and ran to the station to catch the train that took a little over an hour to Brussels.

The arrival in the Belgian capital was magnificent: wide Parisian-style streets and hubbub of international people greeted us as we exited the metro.

Also in this city we found a supportive and loving welcome from, this time, one of our fellow Italian citizens who has been living in Brussels for a few years now. Anna hosted us in her large house where we were able to rest from our trip. With her we talked amiably about our project and the initiatives we carry out, while Anna told us about her work in the capital of Europe and anticipated the wonders and history of the city.

Great expectations for the next few days!