War leaves undeniable scars in cities, their people and their heritage. Talking about those in Europe without mentioning Berlin is almost impossible, considering its recent 20th century history and how intertwined it is with the destructive Second World War.  Located in the banks of the Spree and of the Havel, the city has been for many centuries an important crossroad due to its central position in Europe. In the 15th century, it became the capital city of  the Margraviate of Brandenburg and it has not lost that role ever since. 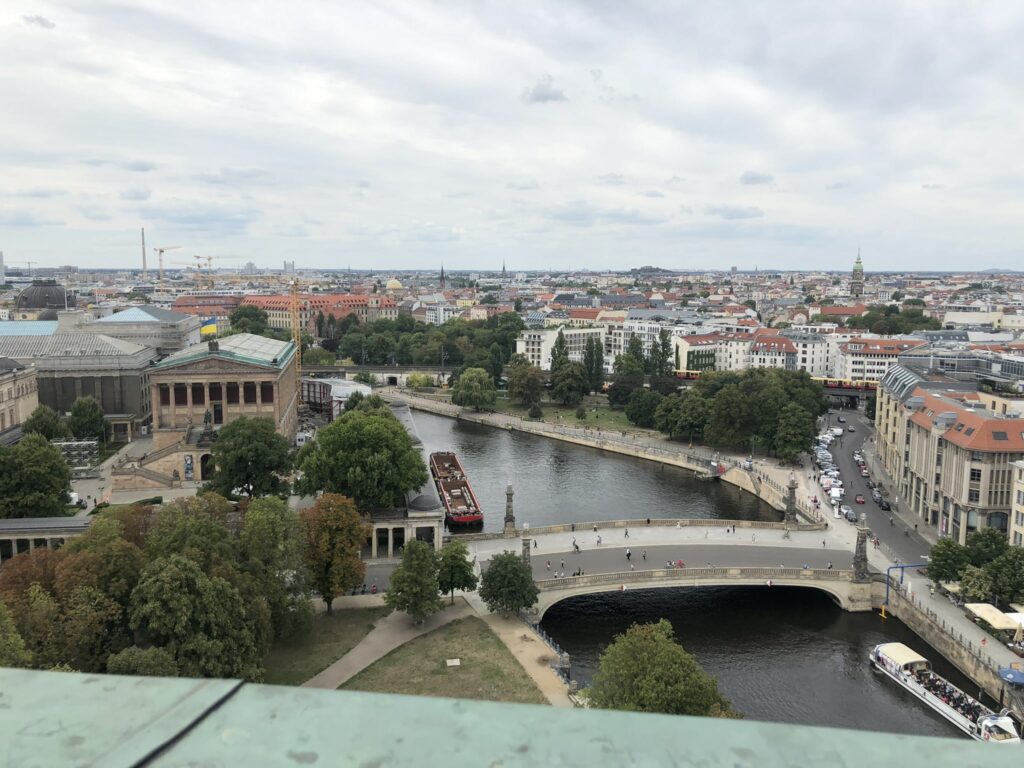 [View of the Museuminsel, from the Berliner Dom]

As the main headquarters of Nazi Germany, Berlin suffered tremendously during the war. After the beginning of WWII, in 1939, Berlin was bombed for the first time in the summer of 1940. From 1943 onwards, Allies began large-scale bombings of the city, and in 1945, right before the end of the conflict in Berlin, the Red Army entered the limits of the German capital, resulting in more than 55 million cubic meters of rubble and a decrease of almost half of the total population.

Reconstruction began even before the end of the conflict, but had different paces and approaches, as Berlin was divided into four sectors and administered jointly by the occupying powers: the United States of America, Great Britain, France, and the Soviet Union. Many destroyed heritage sites laid in ruins for many decades, some were reconstructed or repaired promptly, others are still a current topic of debate. 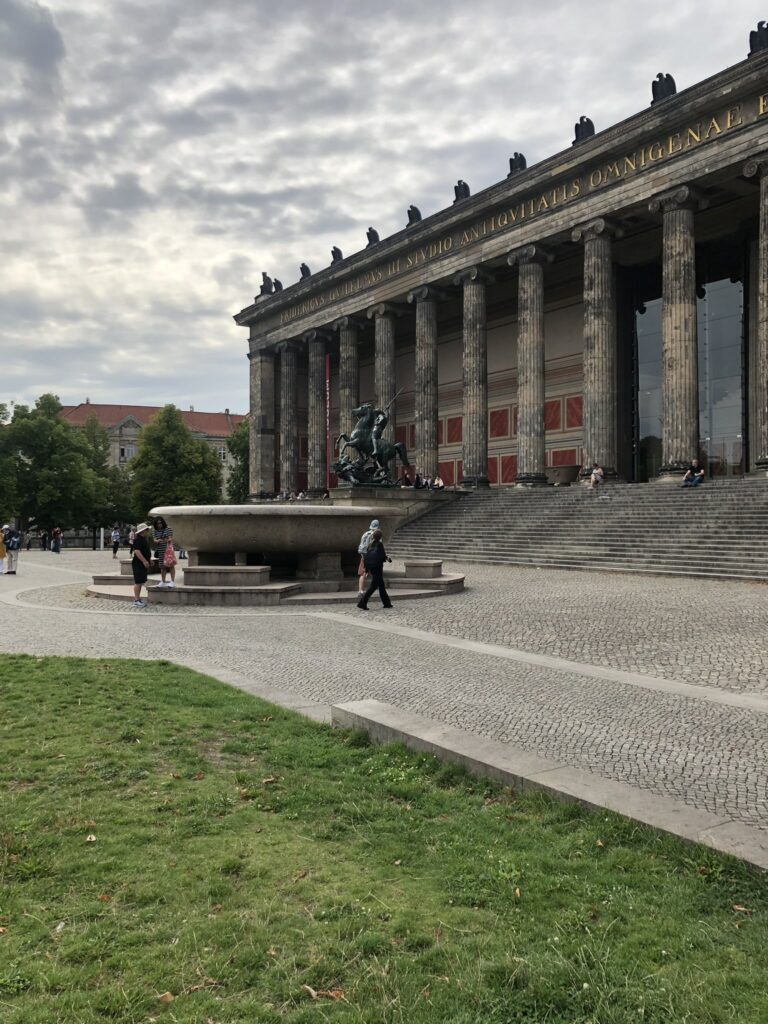 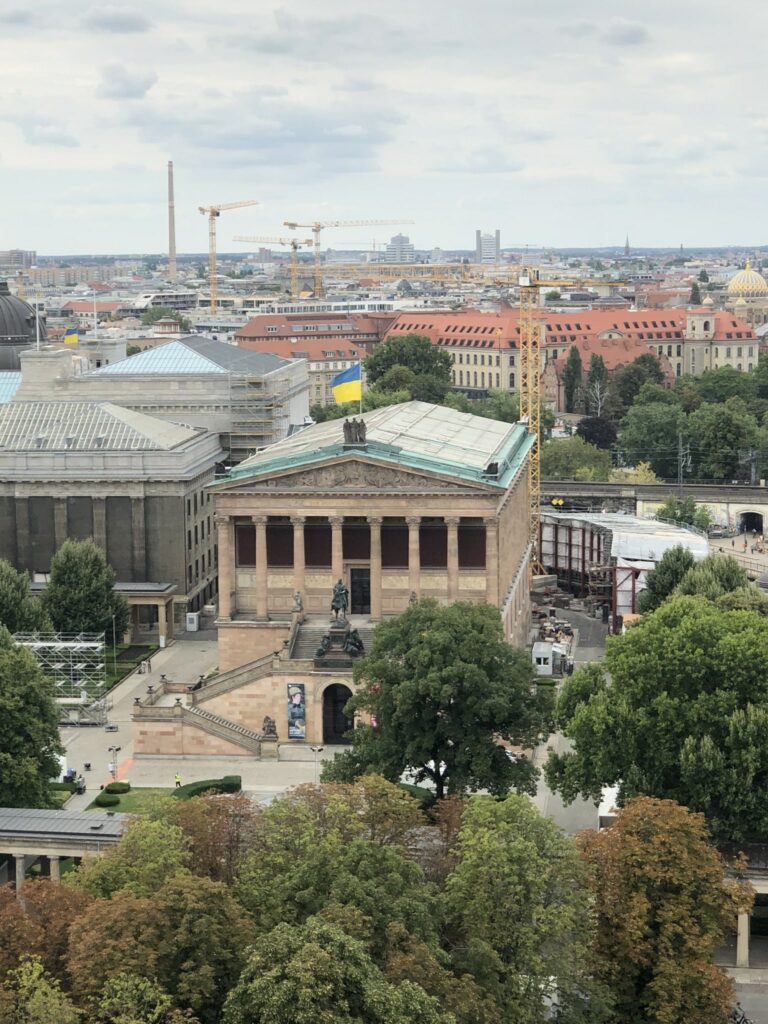 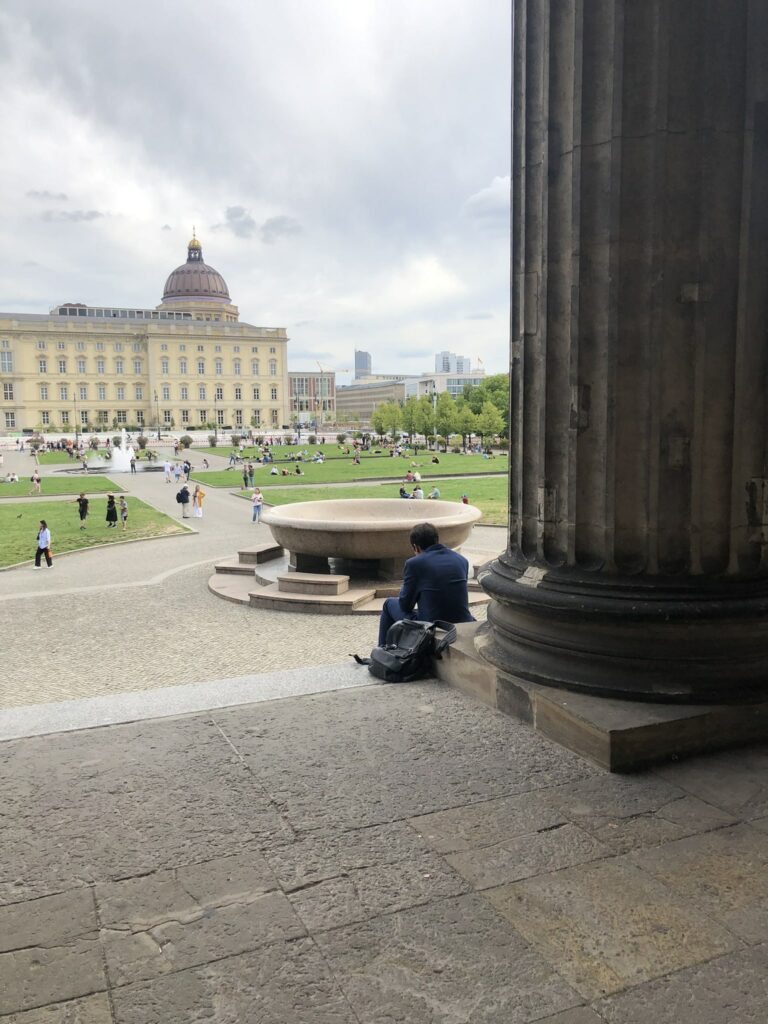 Berlin currently has three different classified World Heritage Sites. In 1990, the first two were inscribed in the World Heritage List: The Palaces and Parks of Potsdam and Berlin – an extensive area that mediates both cities and includes important landmarks of German architecture and landscaping –  and the Museum Island (Museuminsel). The last site to be added, in 2008, was the Berlin Modernism Housing Estates – six housing projects, located in different parts of the city and completed in-between World Wars, that are major examples of the changes witnessed in these typologies in the early 20th century. 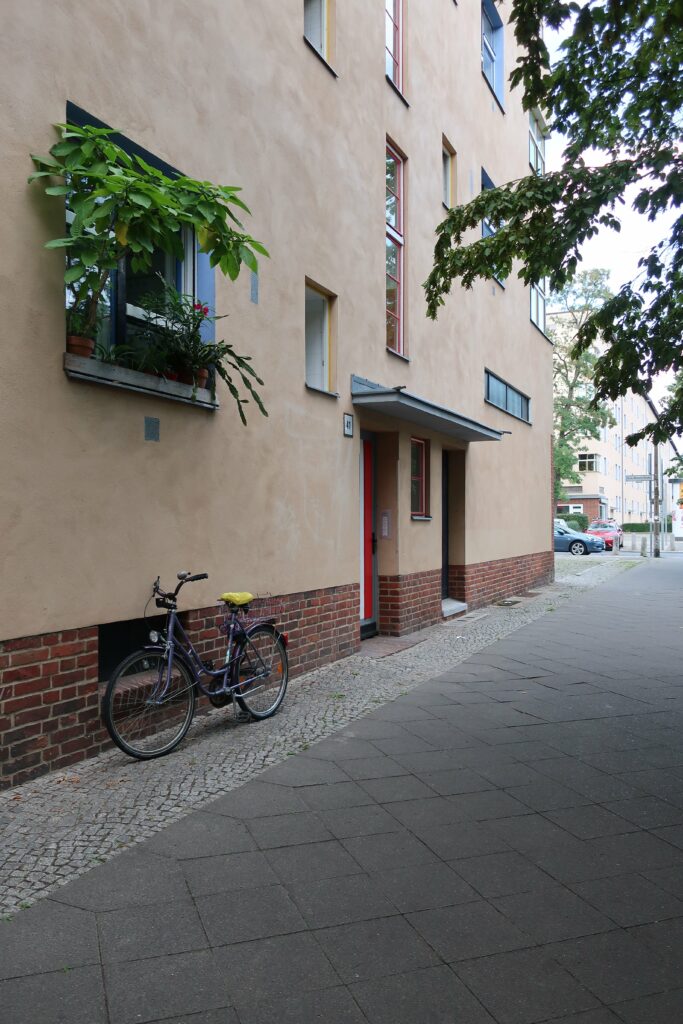 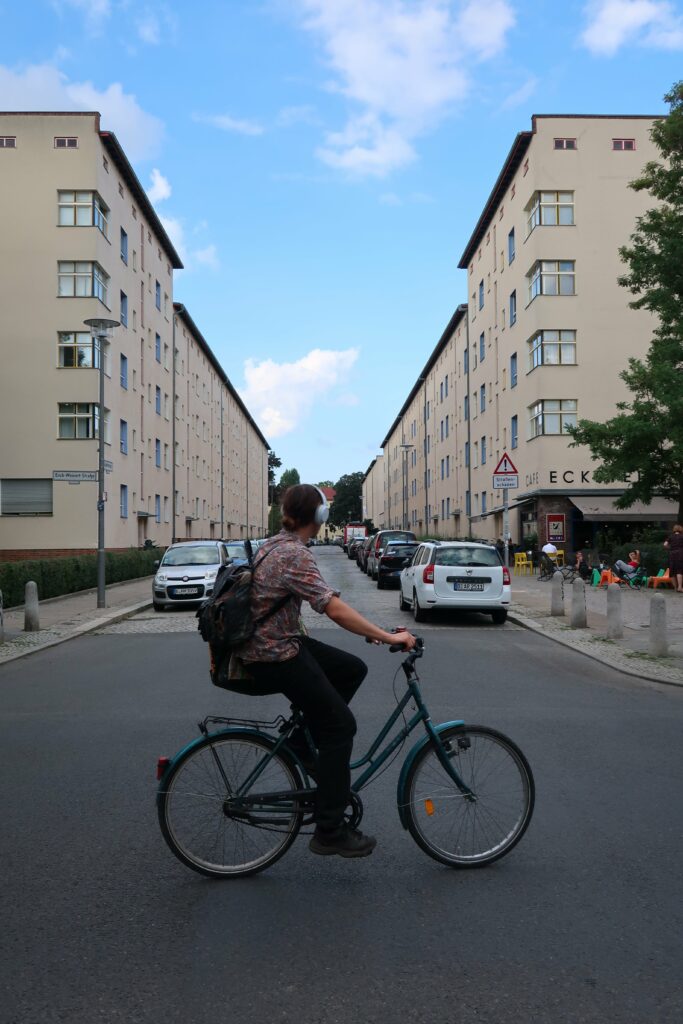 [One of the classified Housing Estates – the Carl Leigen Neighbourhood, built between 1928-1930, by the modernist architect Bruno Taut]

On the day of my arrival to Berlin, I headed to the Museuminsel, one of the UNESCO classified sites in the city. Many of the museums that together make this ensemble witnessed the war and still showcase traces of the conflict – in the walls, patches covering bullet holes can still be seen, as well as darkened stones recovered from the rubble that were restored to their original spot after the war. It was also an opportunity to visit Berliner Dom, the Lutheran cathedral of the city, whose dome offers a panoramic 360º view of the city, allowing visitors to still witness the differences in the eastern – where some soviet-like housing blocks are still prominent – and the western – where less war damage and western influence led to a preservation of more traditional german architecture – parts of Berlin. 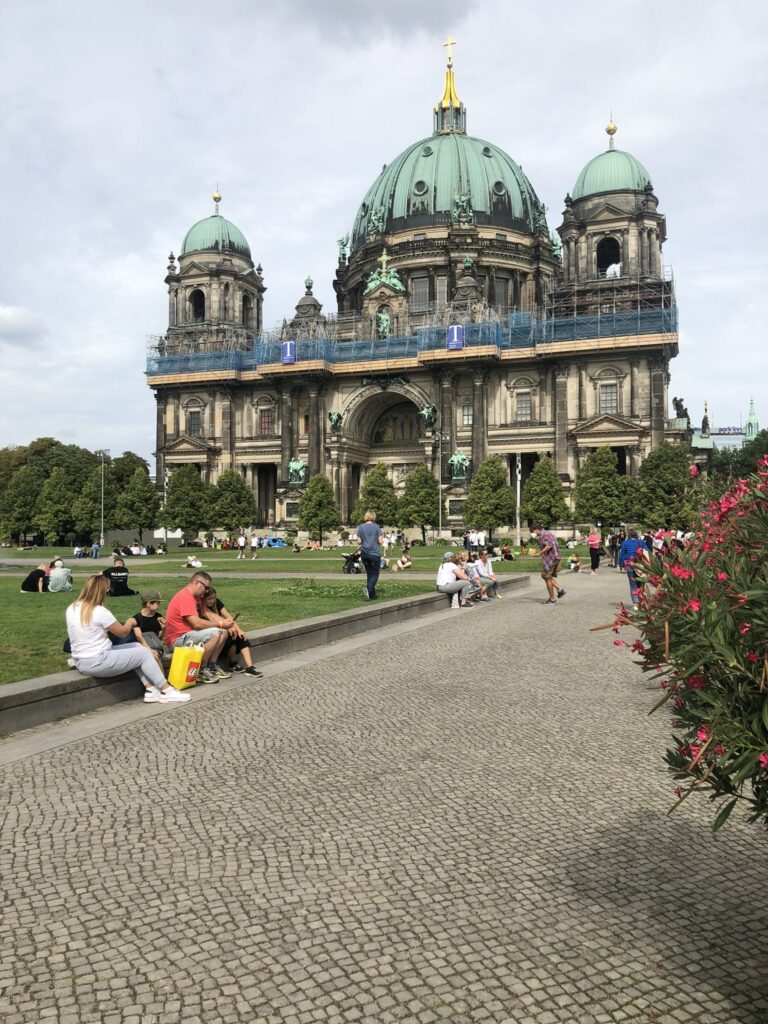 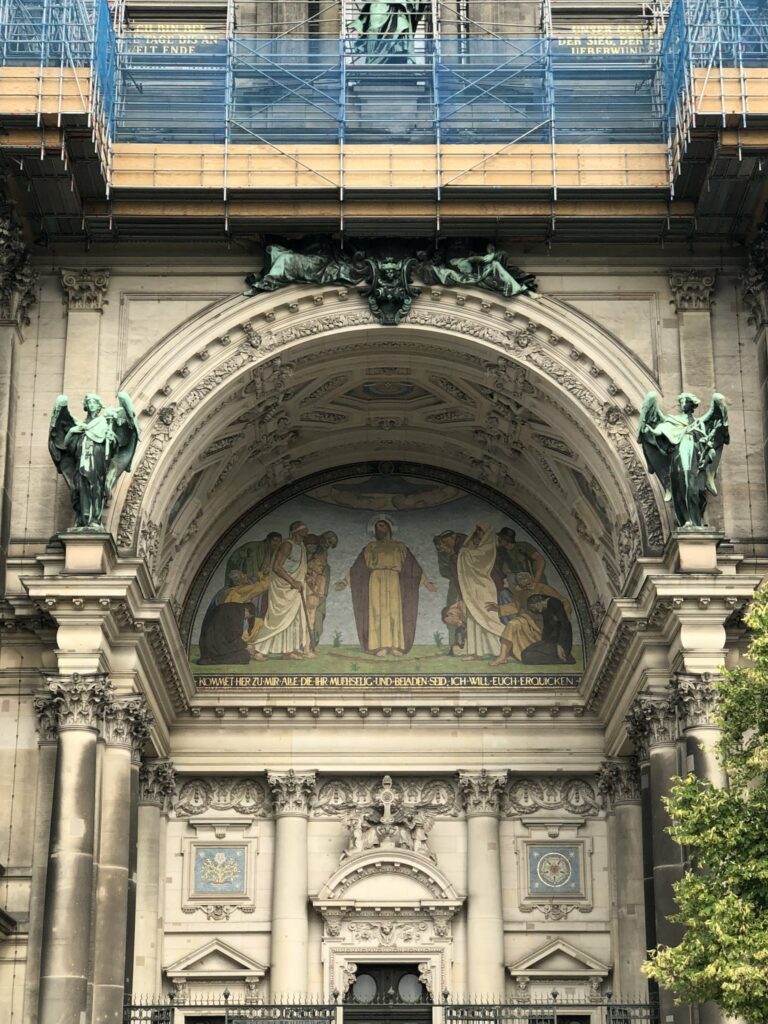 DAY 2: From East to West

With Berlin divided in the aftermath of WWII, differences in the way each area was ruled and rebuilt became evident quite soon. With the construction of the Berlin Wall, in 1961, that became even more evident, as this physical separation remained until 1989. My second day in Berlin started in Alexanderplatz, possibly the most well-known square in the city, and ended in  Charlottenburg, a quarter after the Tiegarten, part of western Berlin. 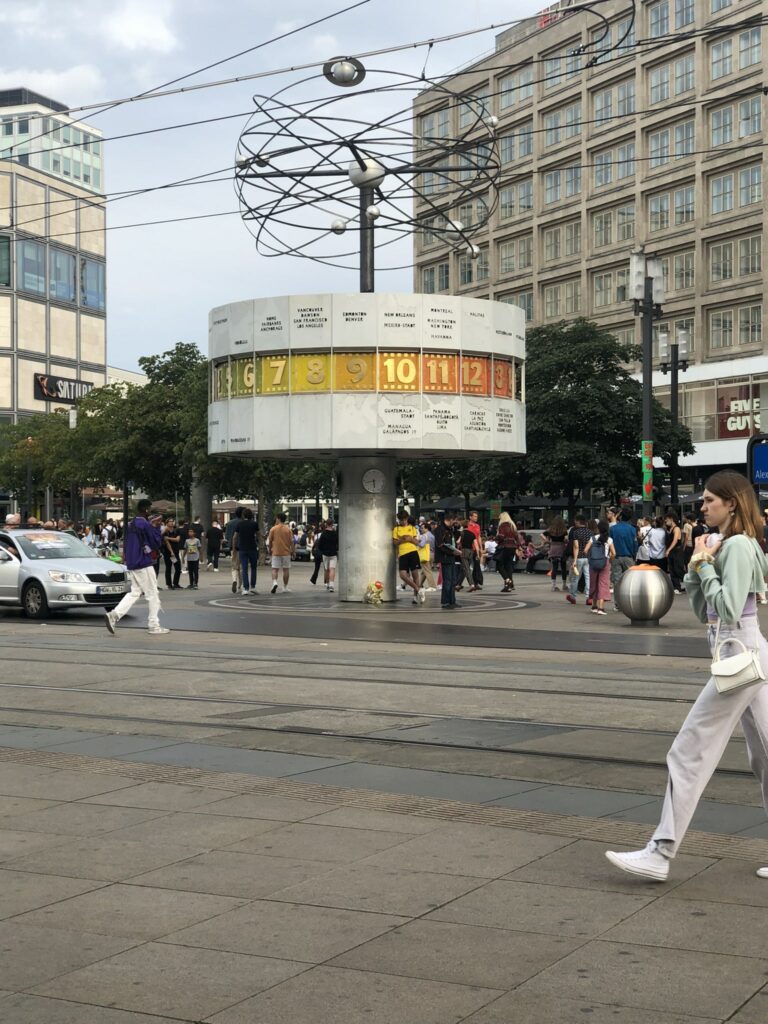 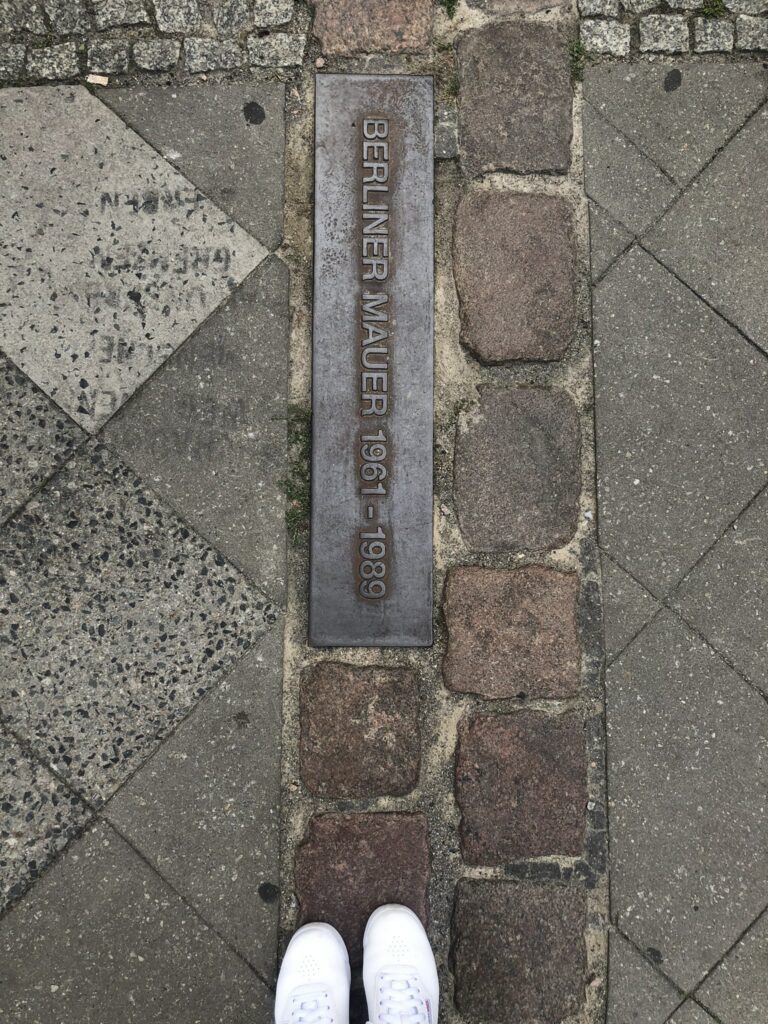 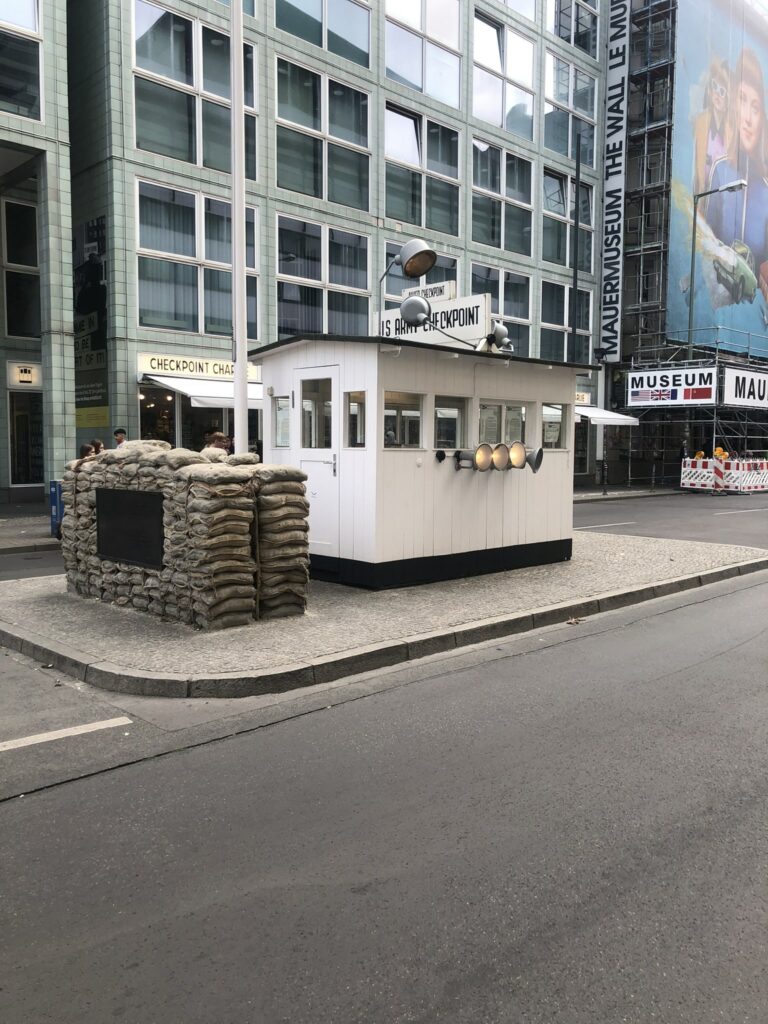 As I walked from East to West, it was very interesting to notice how different political, economic and social views informed different ways to see destroyed heritage and if or/and how to preserve it and protect it. Not far from my starting point there is the Humboldt Forum, a Prussian palace that was massively destroyed during the war and left in ruins for many years in East Berlin, resulting in demolition in 1950. More than fifty years later, the German parliament approved its reconstruction, in 2002, following the original plans and incorporating original pieces, previously stolen. The project loved by some, criticized by how expensive it was by others, is today a space for cultural exhibitions and events. 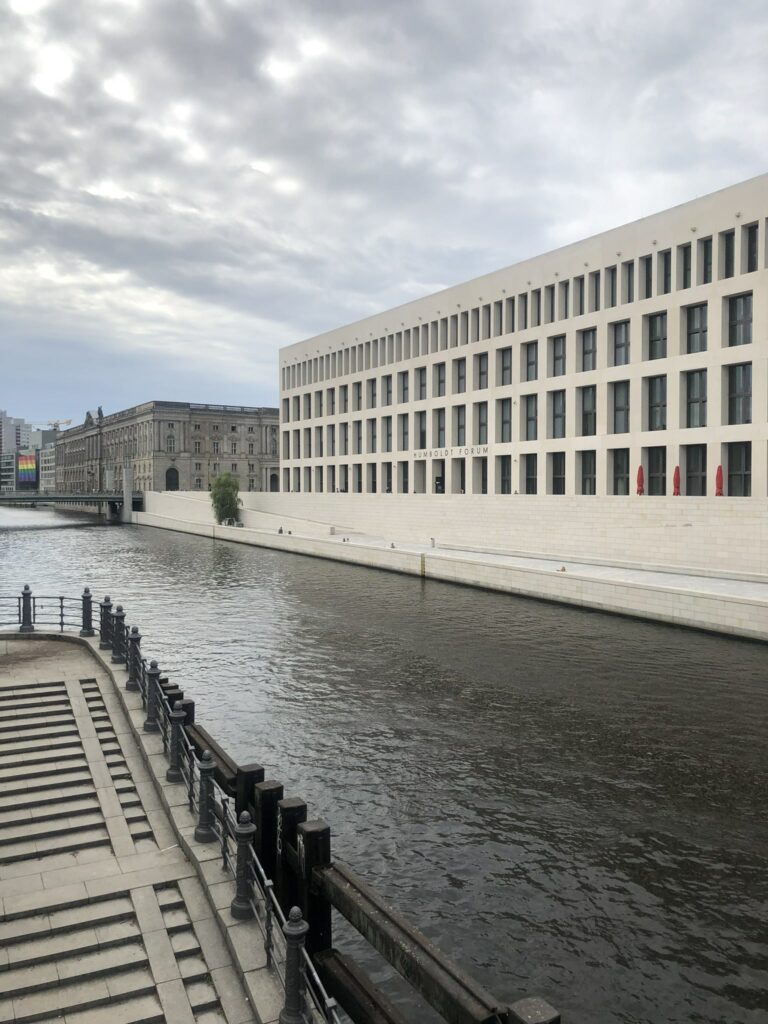 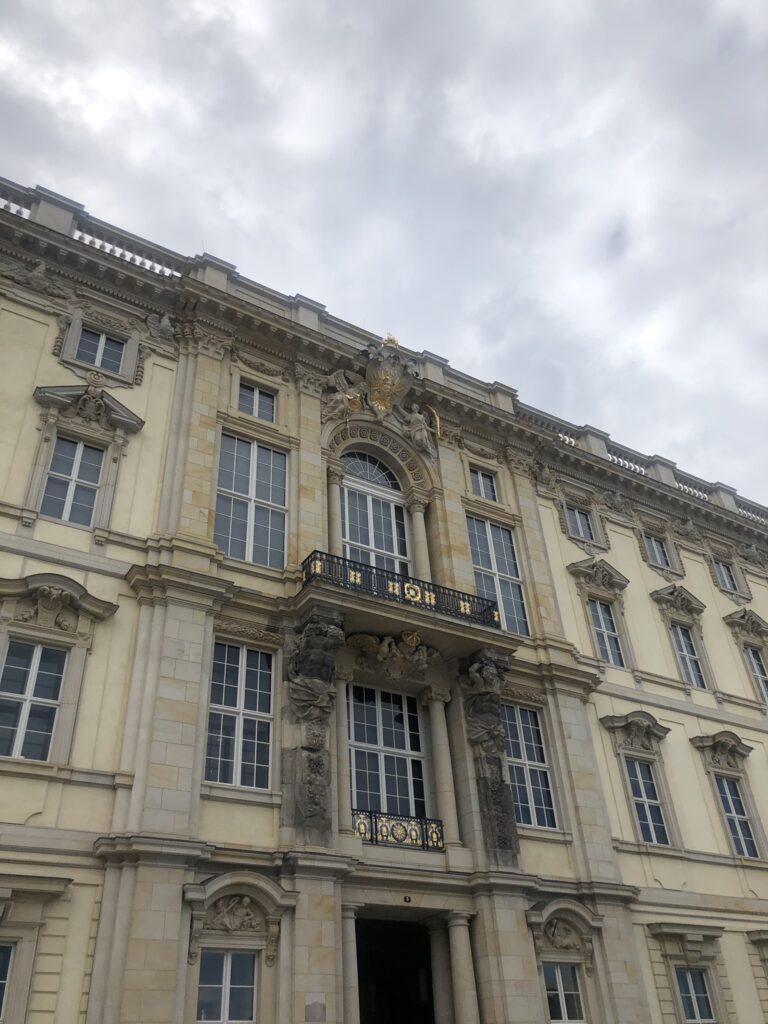 [The contrasting façades of the Humboldt Forum: the one facing the river in a modernistic style that dispenses ornament and the other as true to the original Baroque design as possible]

On a totally different note, as I moved west, many buildings witnessed contemporary additions in replacement of destroyed parts, in an attempt to possibly honor the different times they went through and work as an informal tool to teach about the city’s history. The Reichstag, house of the national parliament, is a good example of that, with its flamboyant dome, designed by the star-architect Norman Foster, in 1995, replacing the one burnt during conflict. 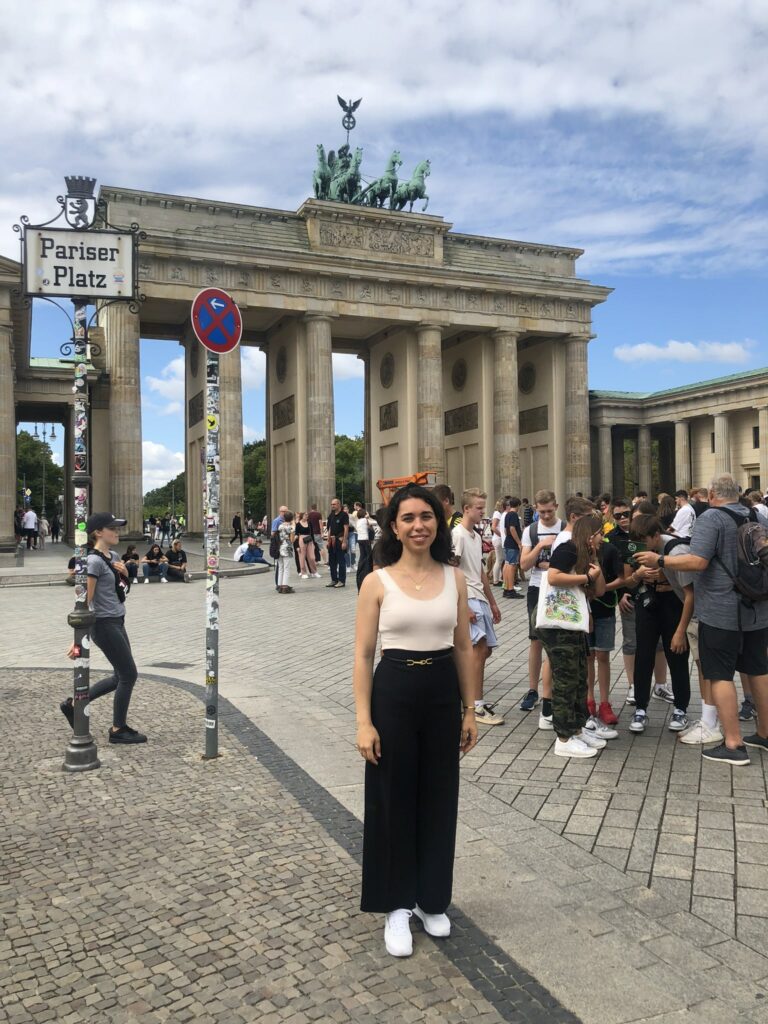 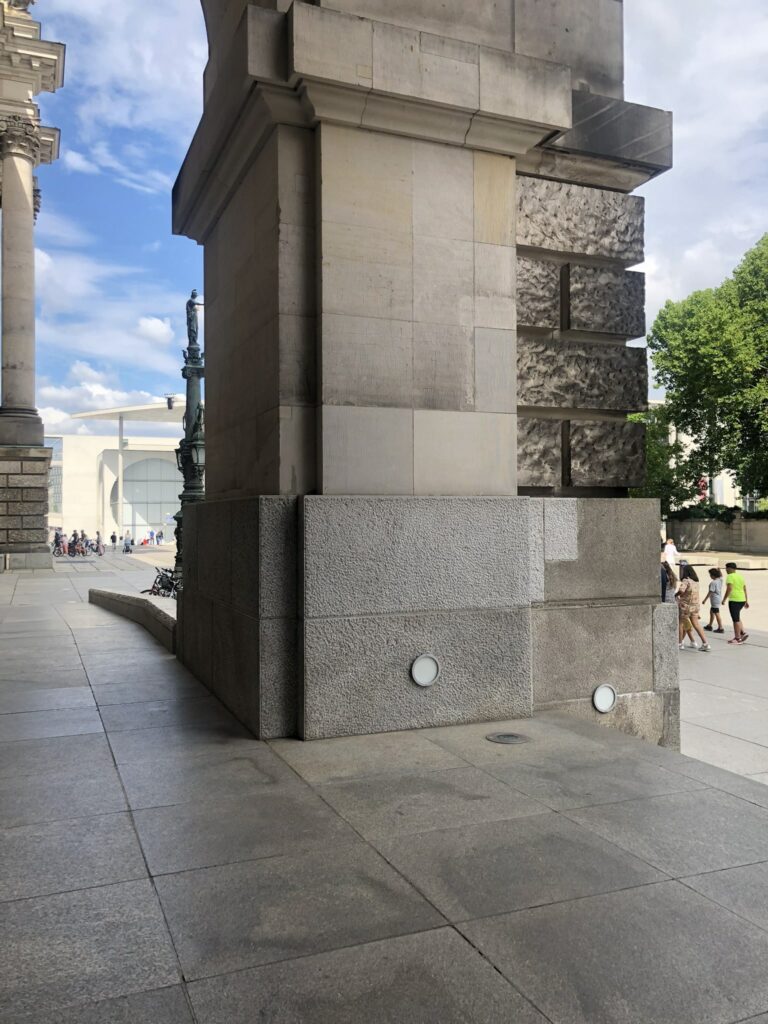 [The Brandenburg Tor, behing which the Berlin Wall passed, and the striking contrast between new and old stone in the Reichstag]

In the evening, I spent a couple hours in the Topography of Terror, the empty SS quarter block, raised to the ground after the war, now a place of remeberance. In the pavilion that now stands there, I could visit an interesting temporary exhibition about Albert Speer, known as Hitler’s architect, and learn about construction during war and planned destruction as well. 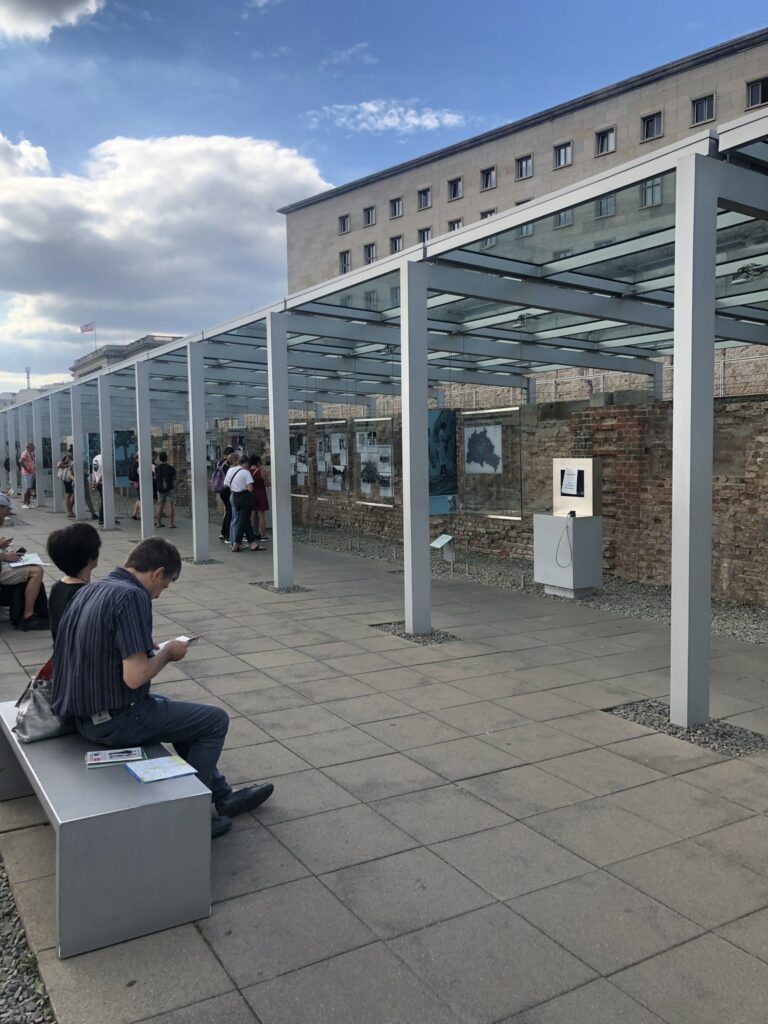 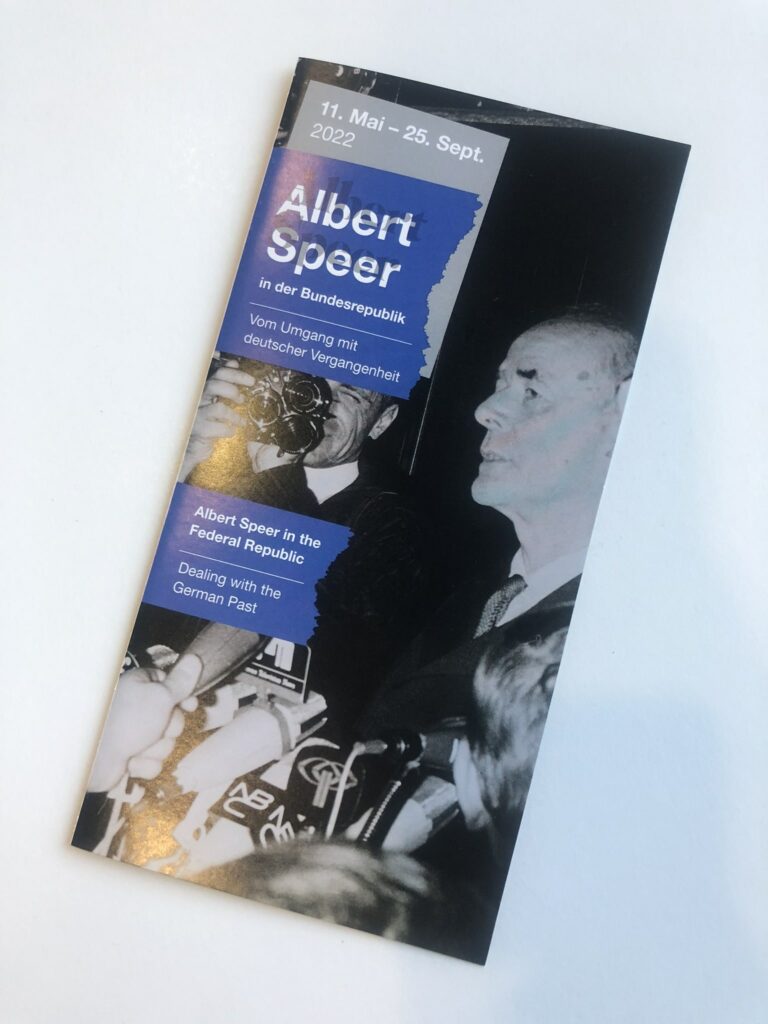 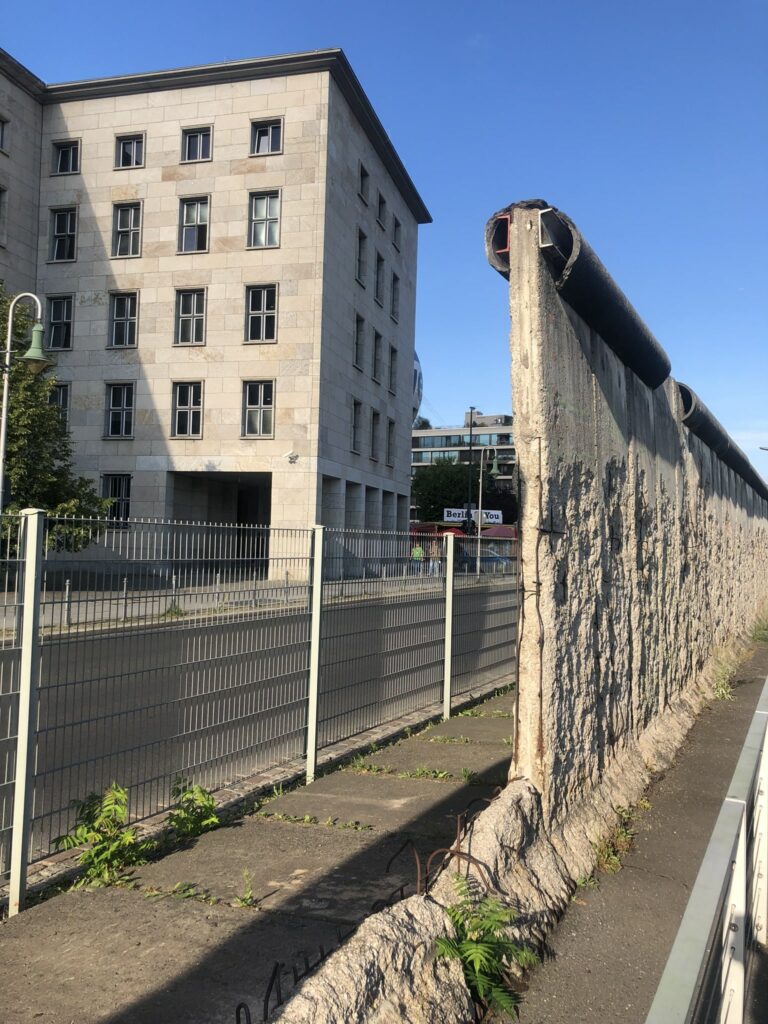 In my last day in Berlin, I explored the Jewish history and heritage in the city, starting with a visit to the Jewish Museum, a contemporary building in southern Berlin that tells the story of Jews in Germany and consequently of their urban life and architectural heritage destruction. In the afternoon, I visited some neighborhoods on the eastern side and walked along a preserved portion of the Berlin Wall, in Friedrichshain. An example of some of the interesting sites visited is  the Water Tower, in Prezlauer Berg – a building used during the Nazi period as a detention space that has now been converted in housing and stands in the middle of a local urban park. 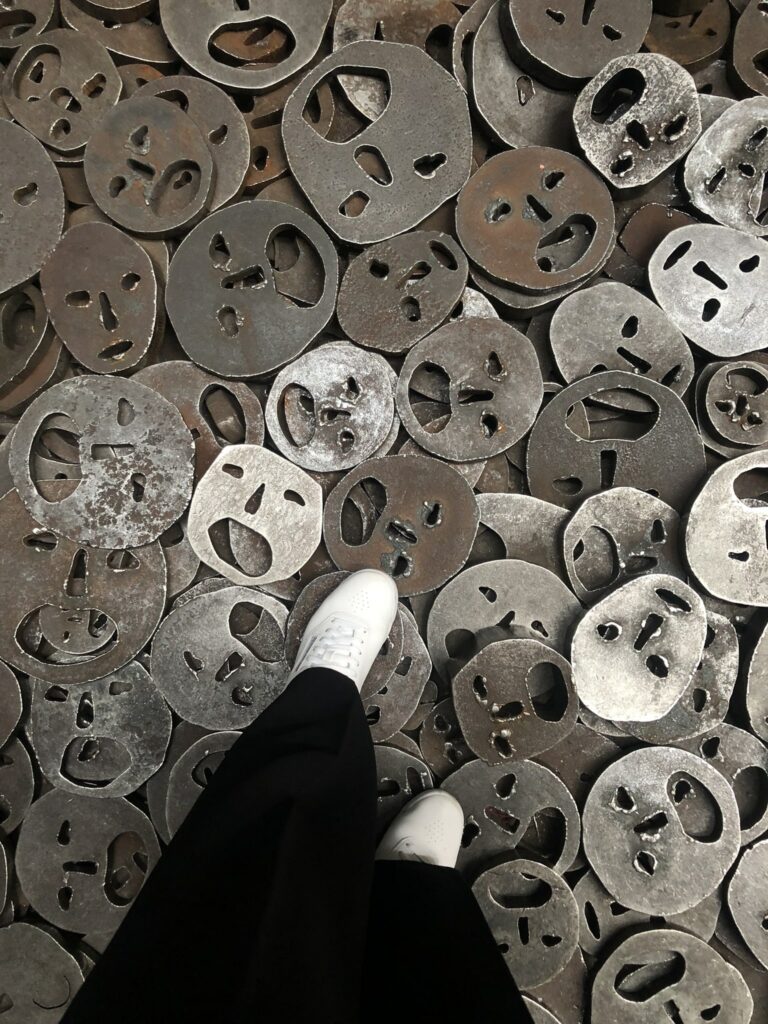 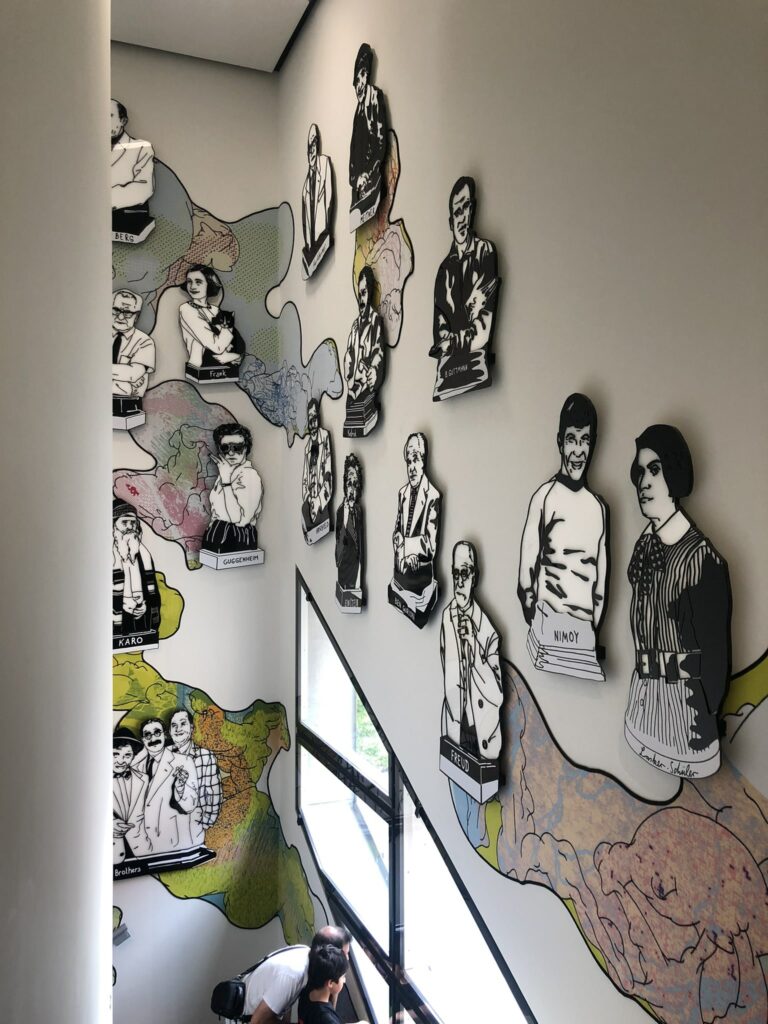 Part of the UNESCO list since 1999, together with the ensemble of the other museums in the island, Altes Museum is a major mark of German Neoclassical architecture. Built between 1825-1830, it embodied a new idea for its time: citizens should have access to art. A major work by the architect Karl Friedrich Schinkel, it was partly destroyed during WWII and rebuilt until 1966. 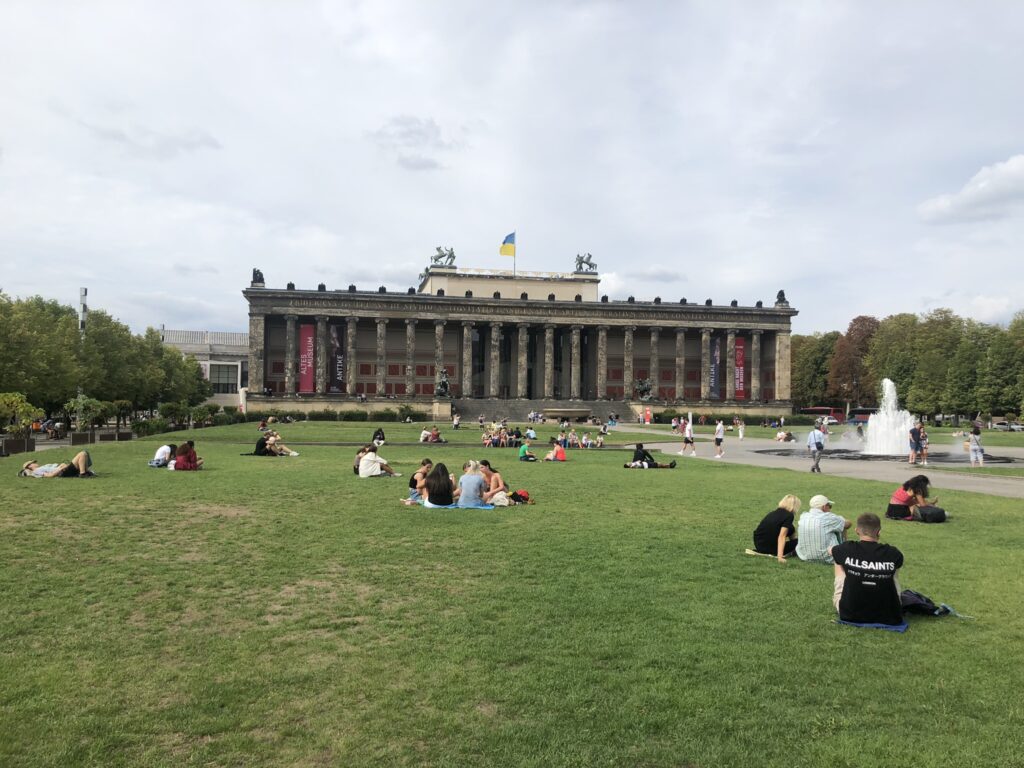 Connecting the Alexanderplatz with the eastern neighborhood of Friedrichchain – heavily bombed during WWII – Karl-Marx Allee is a main axe that was rebuilt in the 50’s in East Germany, with buildings that could resemble Moscow, clearly portraying soviet influence. 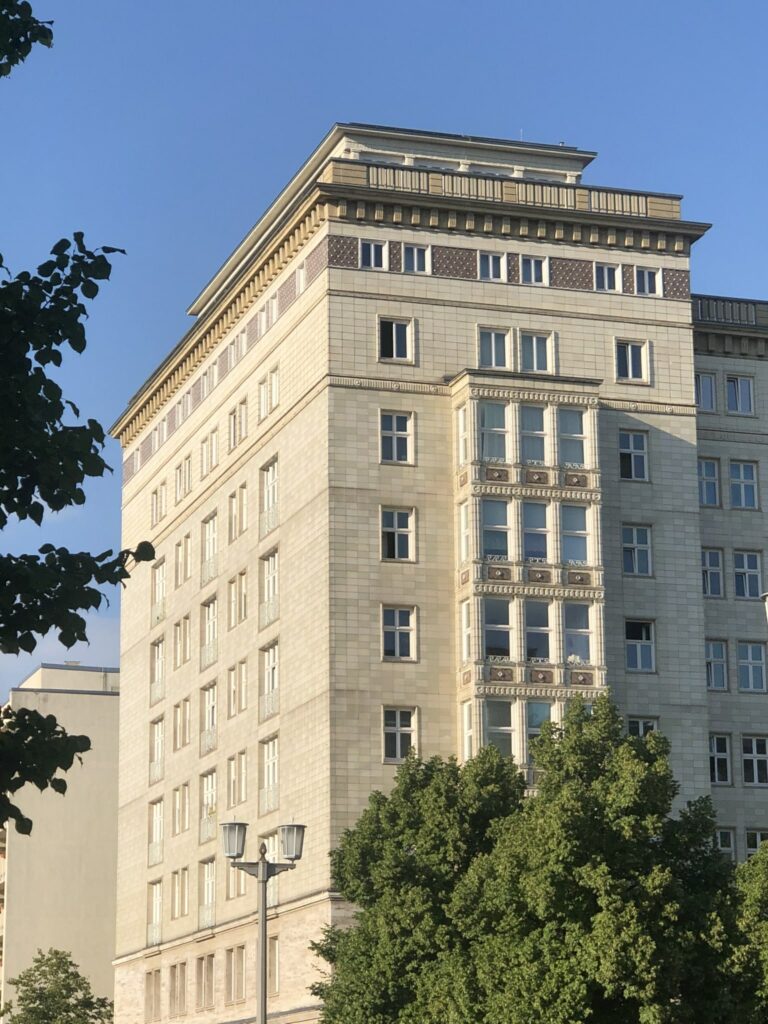 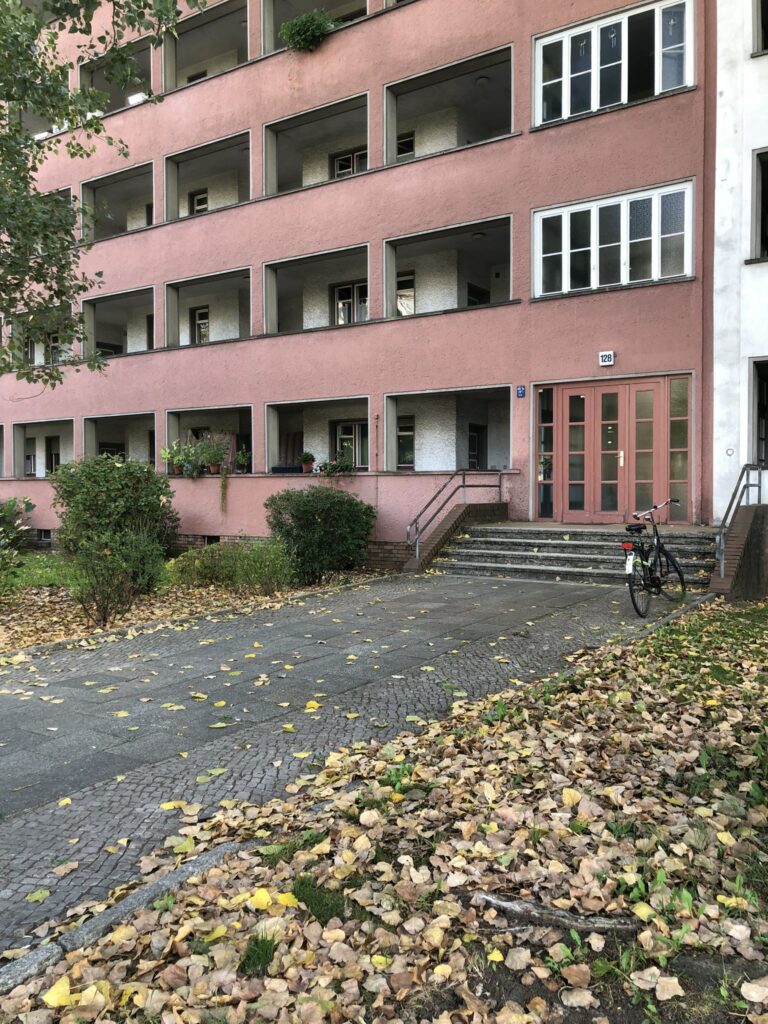 A beautiful church, finished in the early 20th century, placed in the Western part of the city. The bombed tower was left as it was and a memorial chapel was built next to it in the late 50’s to evoke tolerance and spark conversation about the painful history of the building. 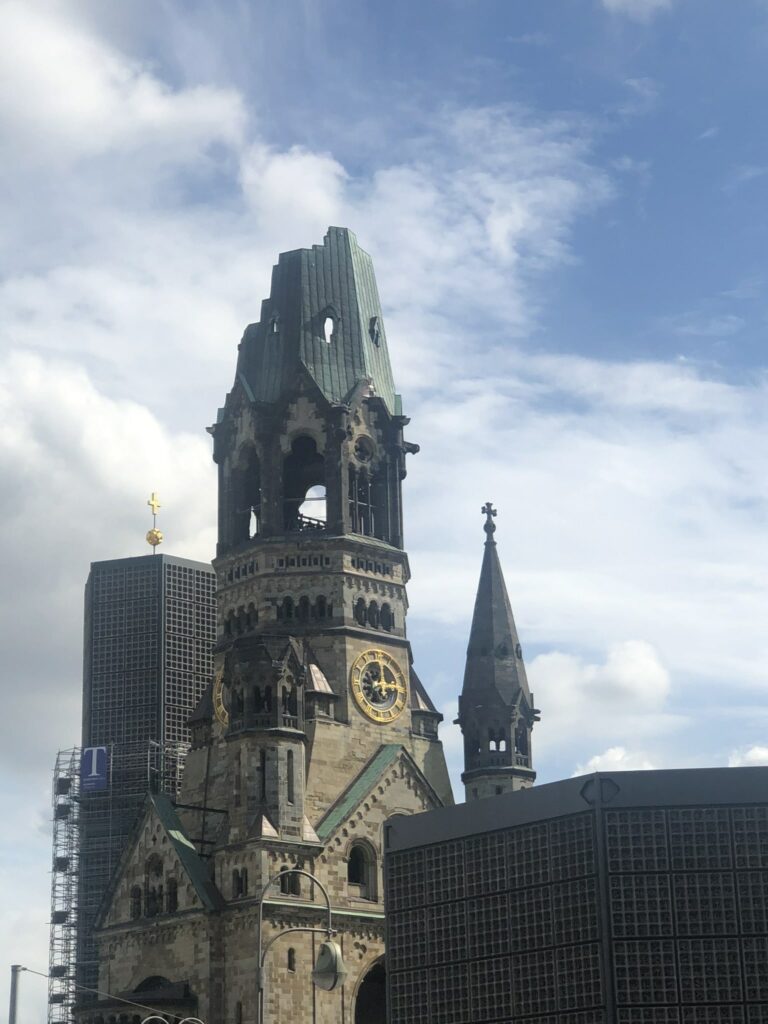 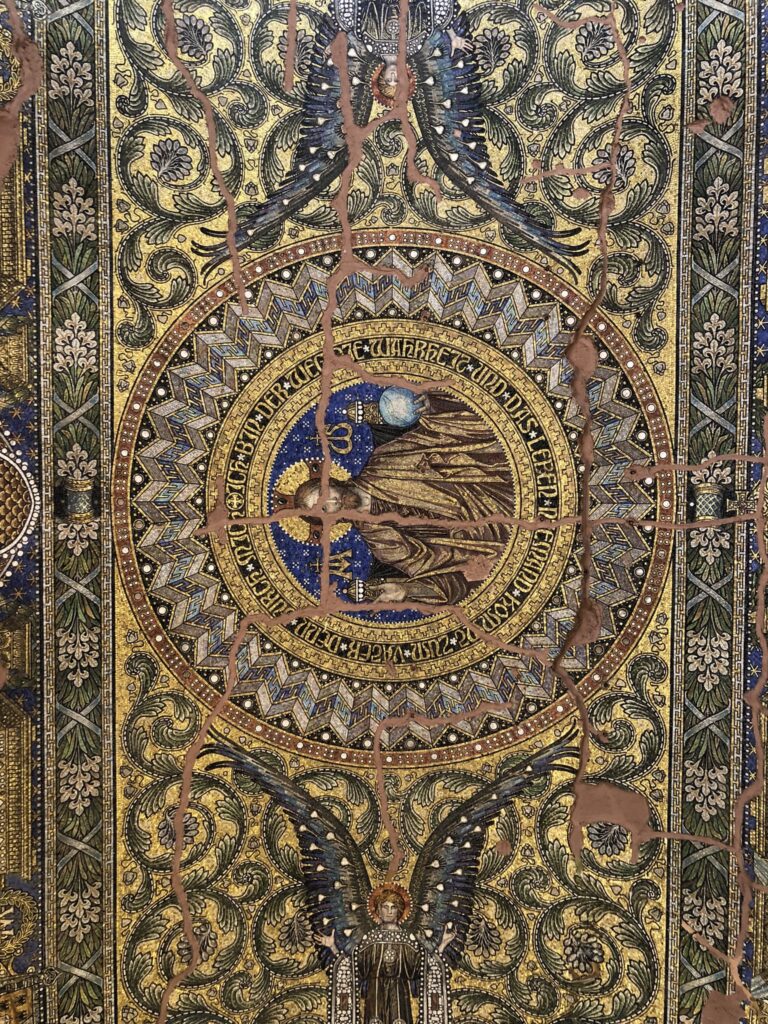 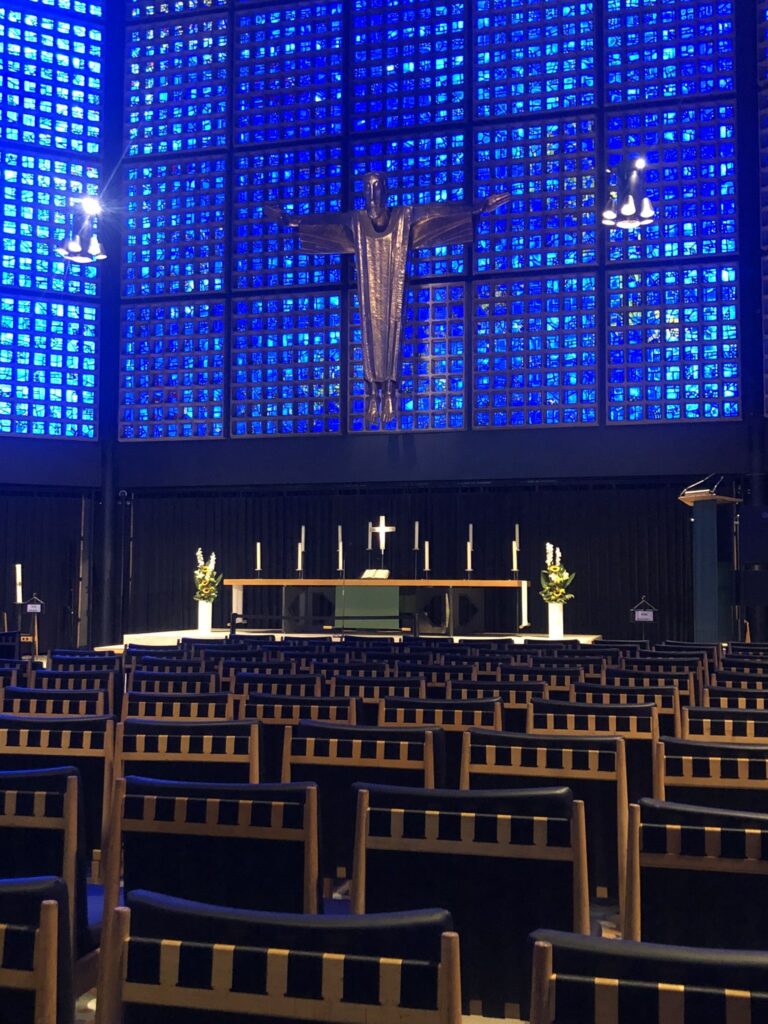