Potsdam is a beautiful city, located only some kilometers away from Berlin, in an area surrounded by lakes and forests. Many Prussian kings and queens enjoyed spending the summer season in the city, which endowed it with magnificent parks and palaces. Even with the capital in Berlin, Potsdam was the house of the Hohenzollen, the dynasty that ruled Germany, for more that 500 years, until WWI, which resulted in a particularly attentive urban planning and landscape as well as a concentration of architecture landmarks, which tell the story of many periods in german history. 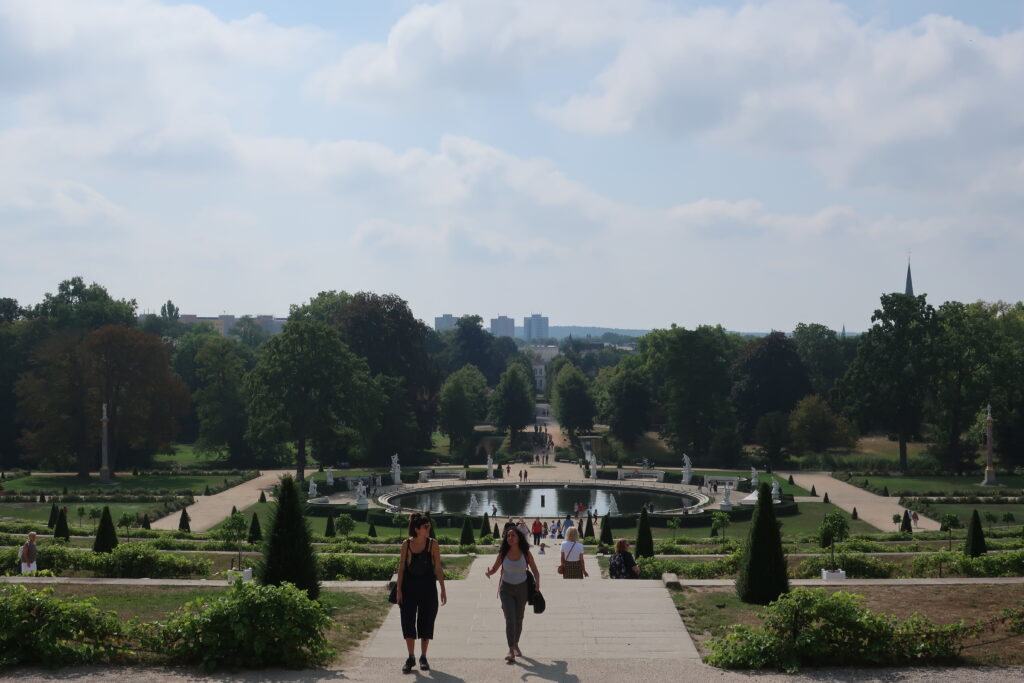 Bombed in April 1945, the old town of Potsdam was significantly destroyed, similarly to many other cities in northern Germany. However, contrary to the city center, the palaces and parks, especially those further away from the city, were spared. With the end of the war in Europe the following month, the victorious powers needed a proper place to gather and decide on the aftermath of the conflict. 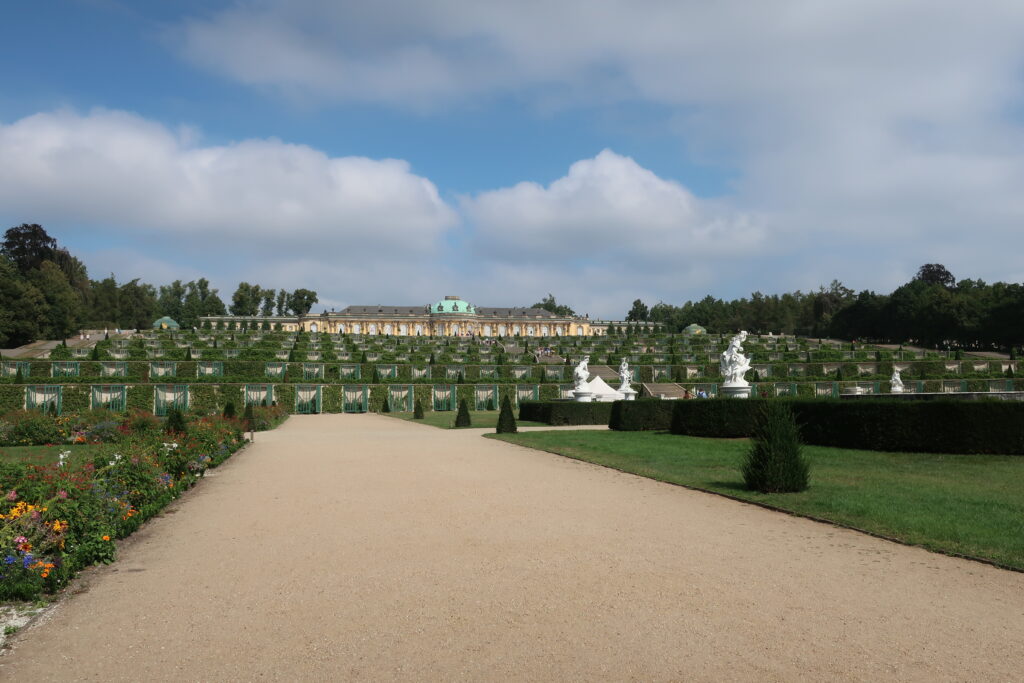 [The Sanssouci Palace, built on top a vineyard, a mark of its time and Frederick, the Great’s interest in recreation, beauty and the arts]

However, Berlin had been massively destroyed and no building that could host securely such a pivotal meeting there was found. Potsdam made history once more, by hosting the Postdam Conference, in the Cecilienhof Palace, from July 17 to August 2, 1945, where representants of the US, UK and USSR decided on the future of Germany and the new borders in Europe, paving the way for a divided country and a time of apparent peace – the Cold War. 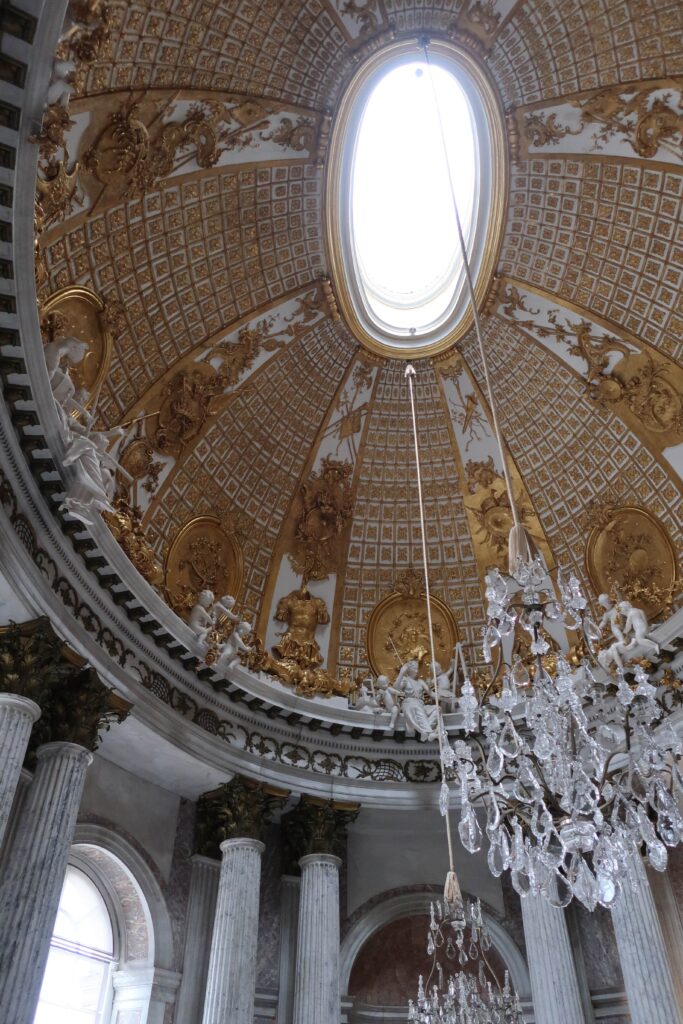 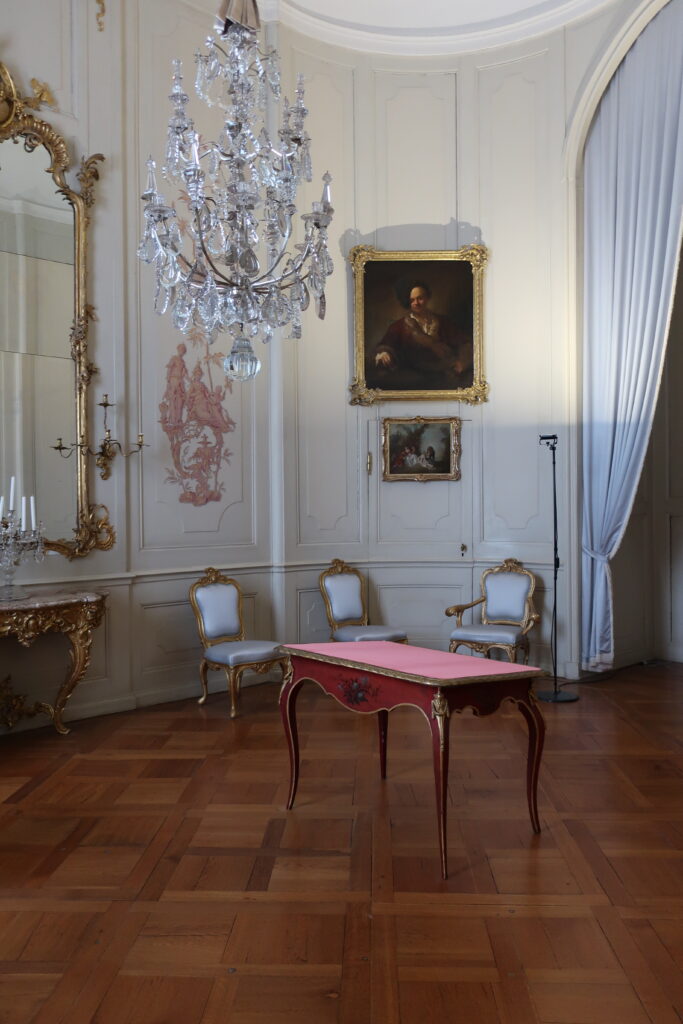 [Magnificient details inside the intimate Sanssouci, much smaller than its previous Baroque precursors]

First considered a World Heritage City in 1990, the city has seen since then the number of buildings included and the area classified grew twice, in 1992 and 1999, including now, besides Sanssoussi – the first of the summer palaces to be completed in 1747 – many other aristocratic houses, parks and even a Russian colony downtown. 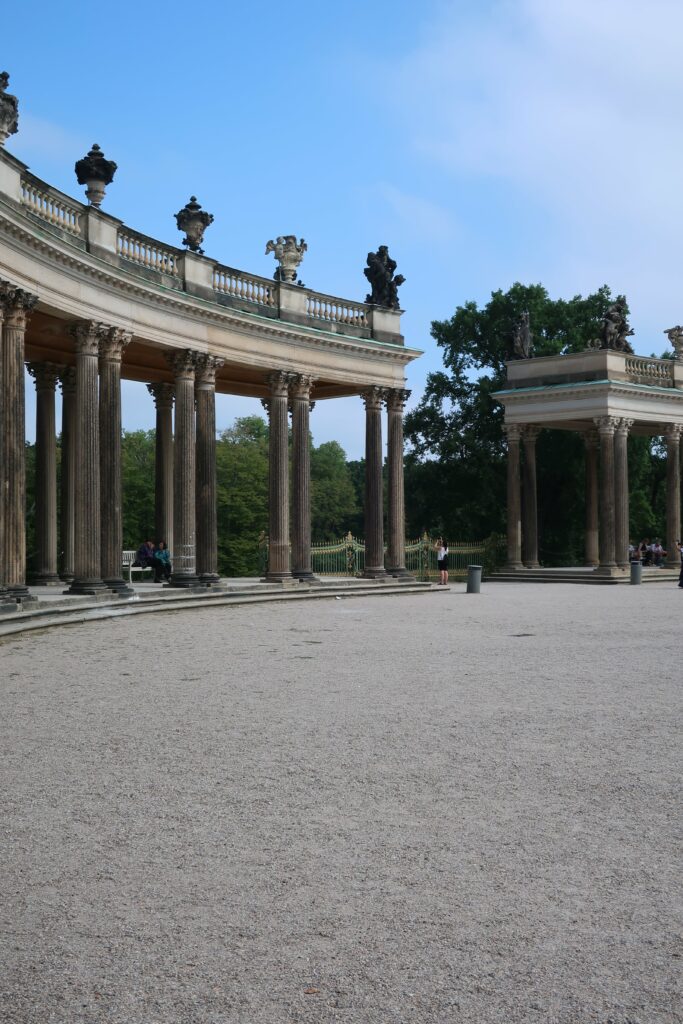 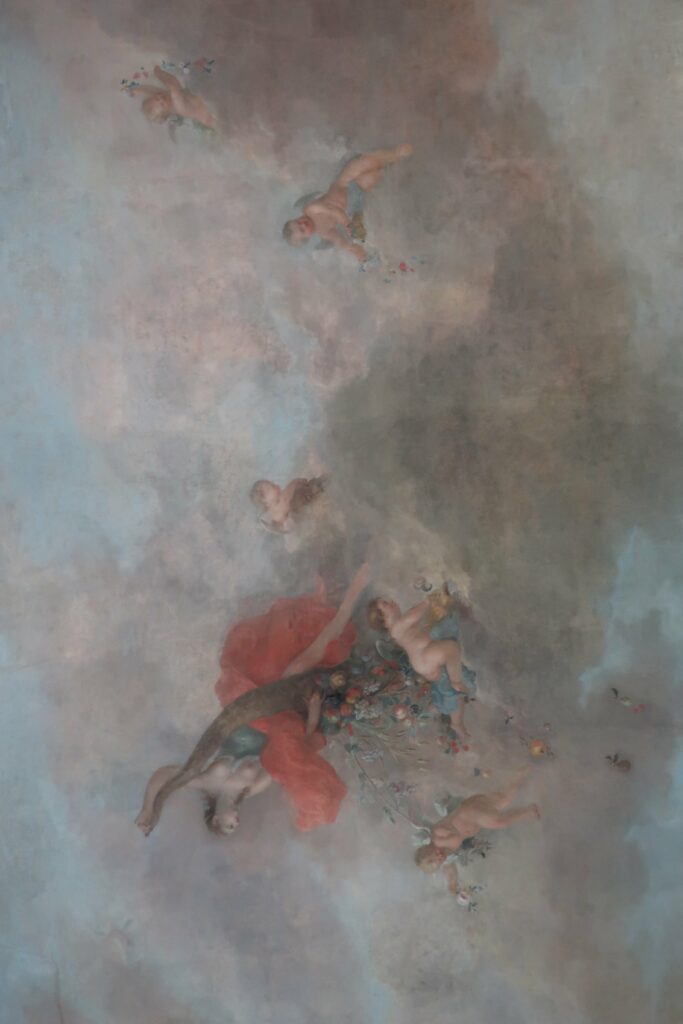 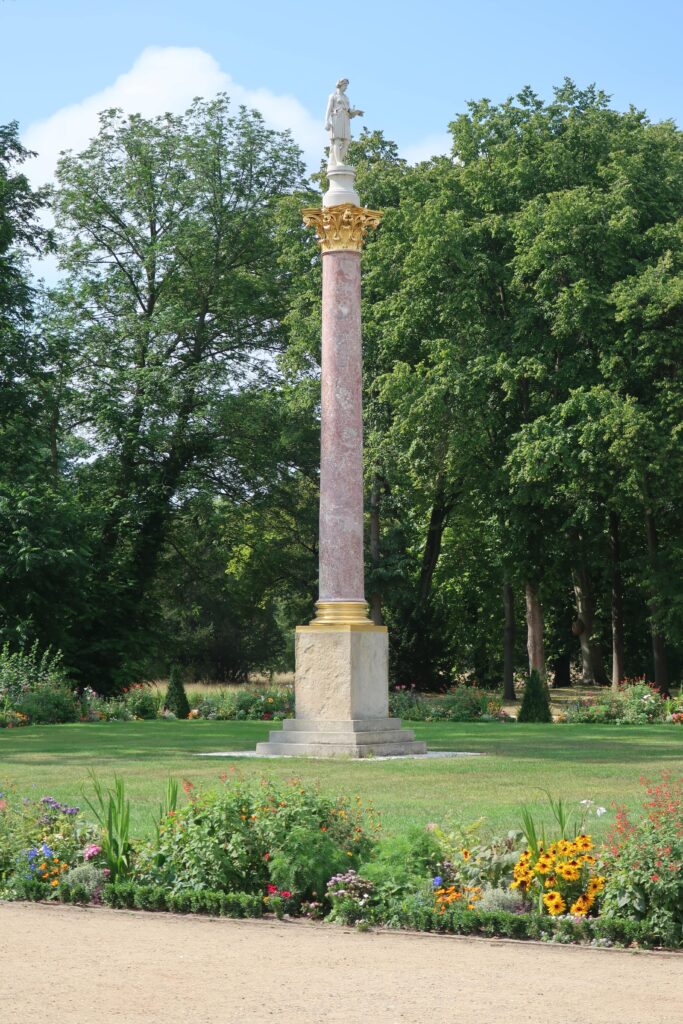 [The portico outside / The painted ceilings / Details of the gardens, a project by Peter Joseph Lenné]

DAY 4: From Summer Palaces to the WWII Aftermath

My visit to Potsdam started at the Sanssouci (in French, Without Problems) Park, with a guided tour through the Sanssouci Palace, commissioned by Frederick, the Great and the first one to be built in the magnificent gardens, a landscape jewel designed by Peter Joseph Lenné. In an extensive green area, where each details seems to be have been cared for, I also had the opportunity to stop by the Roman Baths, the Charlottenhof Villa – an elegant small neoclassical palace by Karl Friedrich Schinkel – and the Orangery – the last addition to the complex, built between 1851 and 1864. 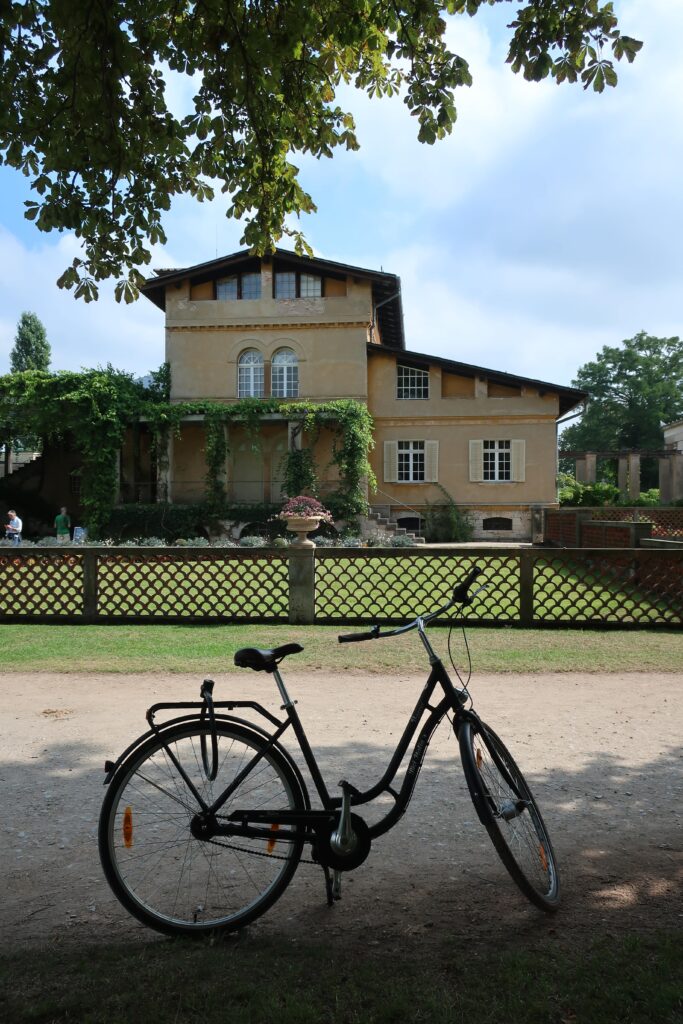 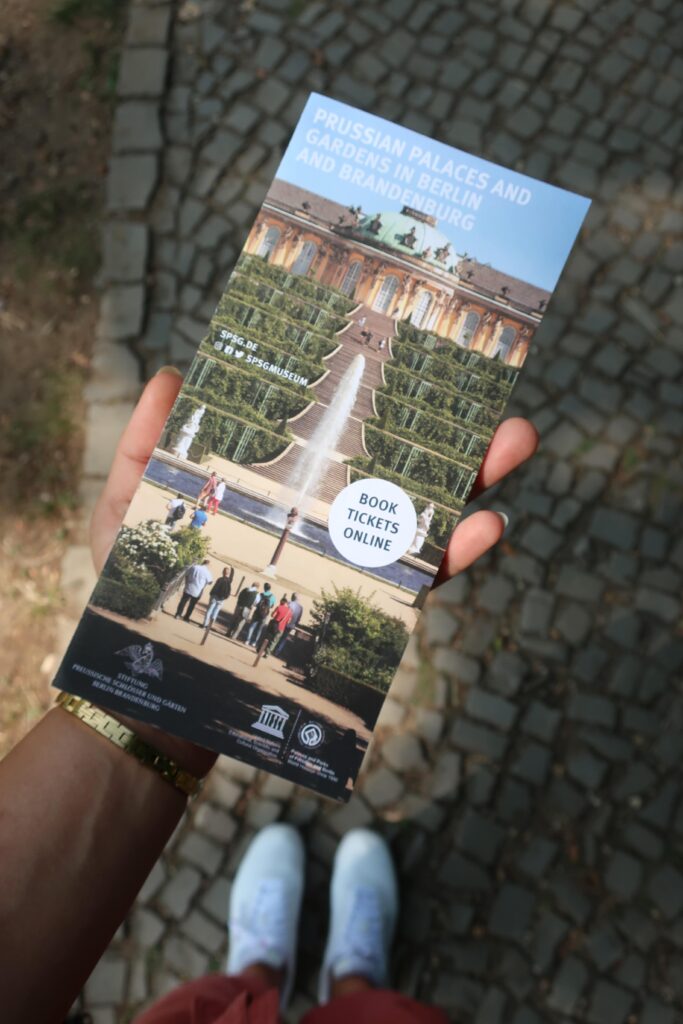 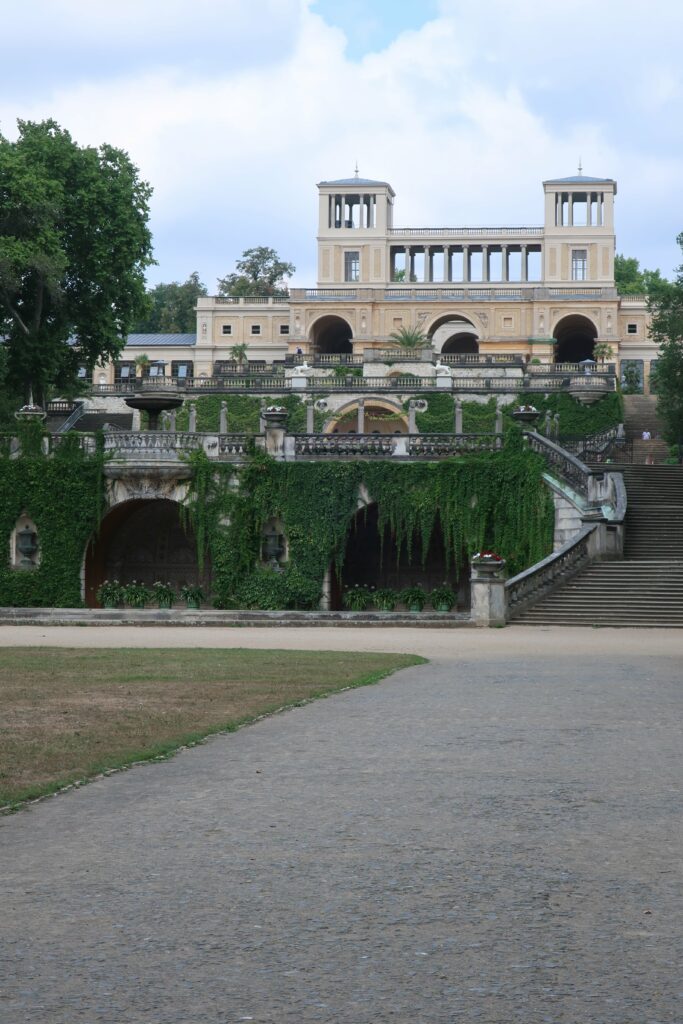 [The Roman Baths, portraying the renewed interest in the Classical period in mid-1800’s / The Orangery, the last building to be built in the park] 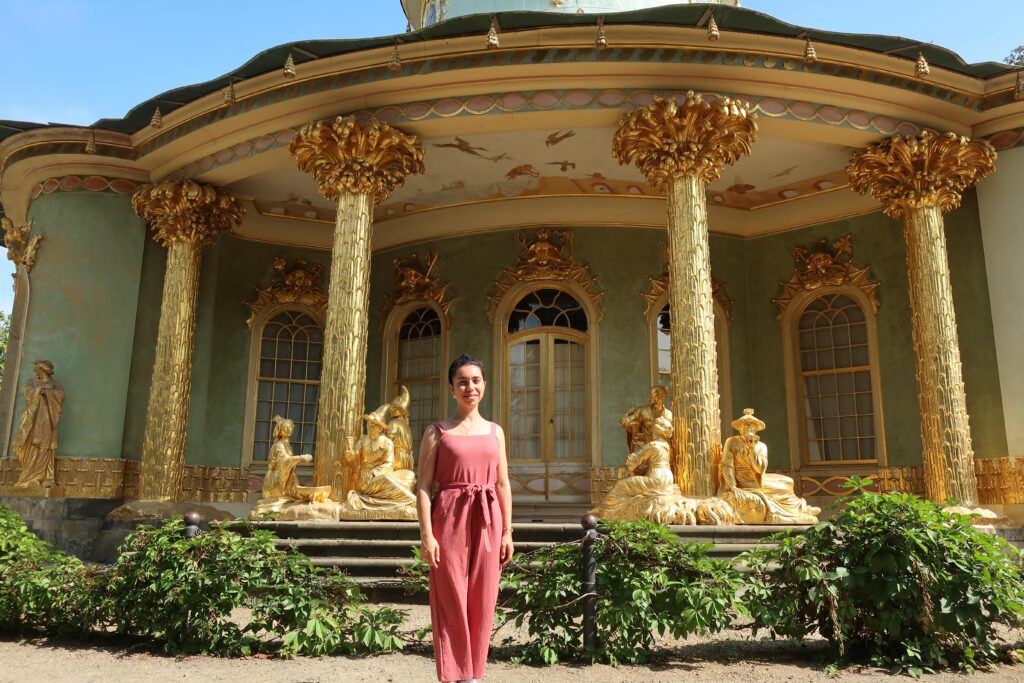 [A stop at the Chinese Pavillion, another sign of the interest in oriental, less-known cultures and the habit of having tea, in the 19th century]

Then, I headed a couple of kilometers north to visit the New Garden, a newer area, built to suit the acquired taste for privacy and English landscaping of the late 18th century, with the intention to visit the Cecilienhof, the last palace to be built and where the Potsdam Conference was held. To finish my day, before getting back to Berlin, I walked back to the city center and visited Aleksandrova – the Russian colony – and the Dutch Quarter, testimonies of the artistic and multicultural environment promoted by the presence of the court back in the day, as well as some churches that deserve to be mentioned: the Nikolaikirche – another neoclassical major work by Schinkel – and the Franzosische Kirche – where the traces of the destruction in the city right before German surrender could still be seen. 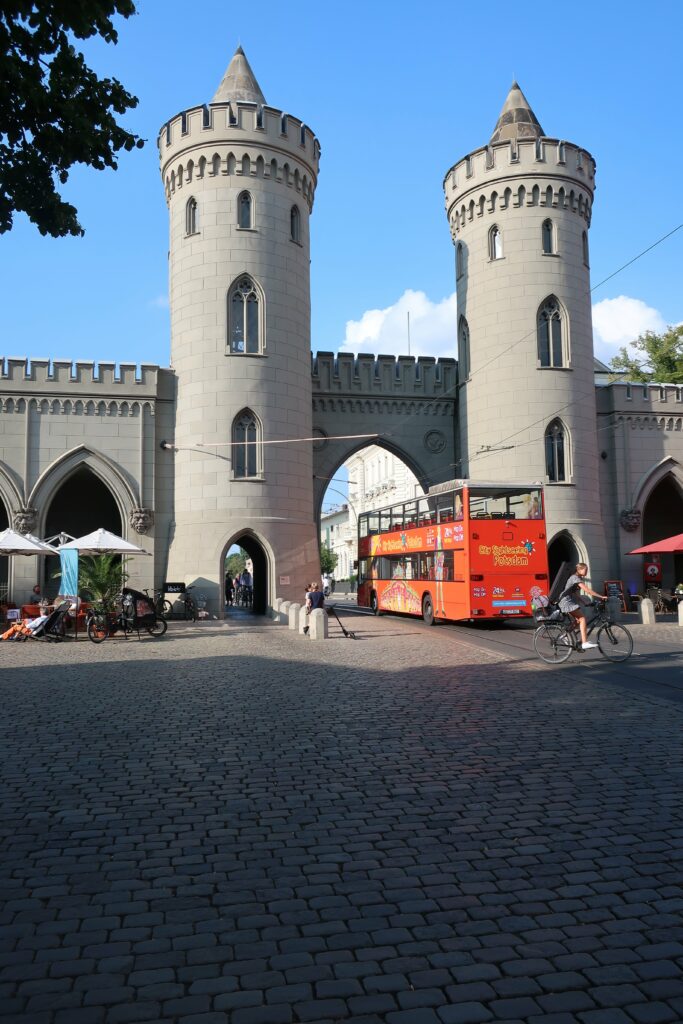 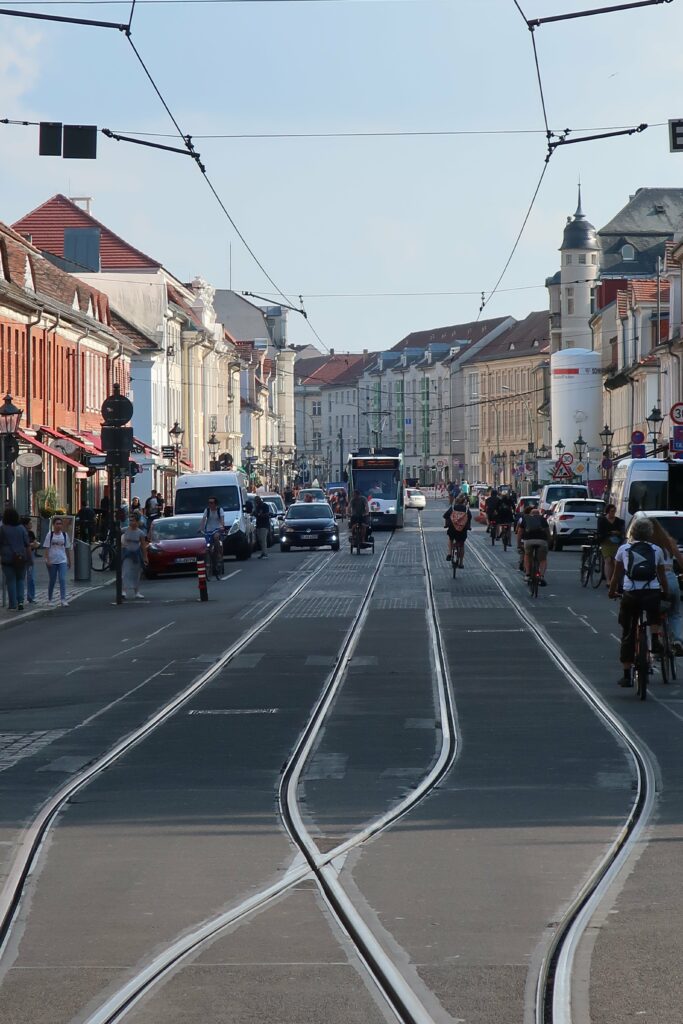 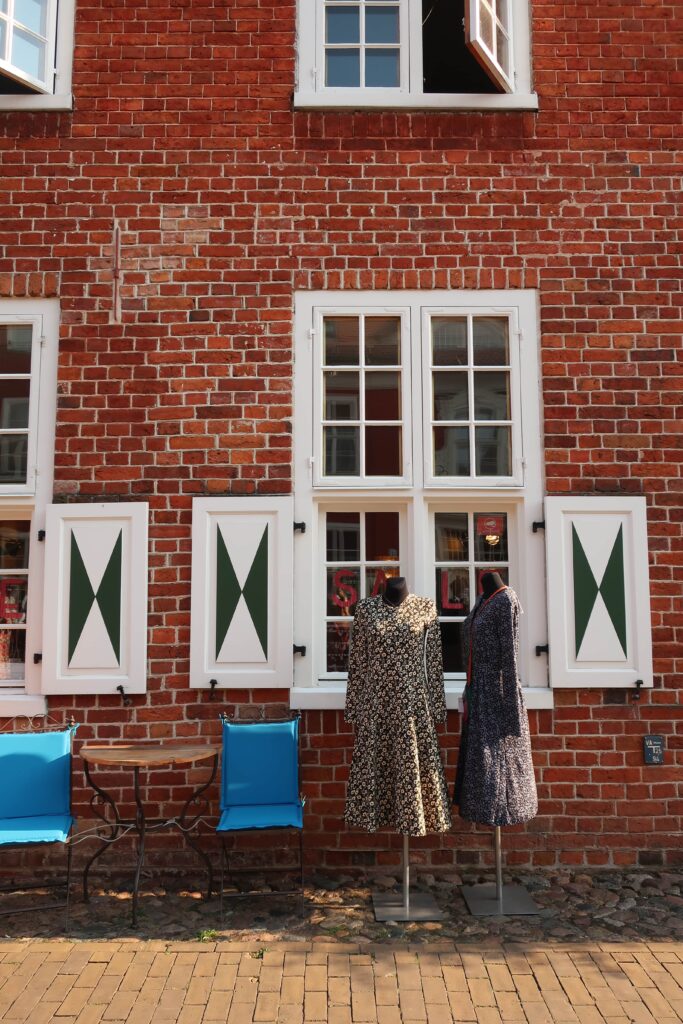 [One of the gates of the old city / A street where the local historical preserved architectural heritage can be see / The Dutch Quarter, built in the 18th century, with typical brick two-stories houses]

In comparison to Berlin – a bigger city, later divided -, I got the impression that in Potsdam – that fell under western influence after the war -, the reconstruction process was more linear and sparked less debate on the approach to follow. The majority of the buildings were repaired or rebuilt as they were or following guidelines that were grounded in local tradition. The result is an overall coherent urban center, that seems to be very appreciated by its inhabitants and visitors. 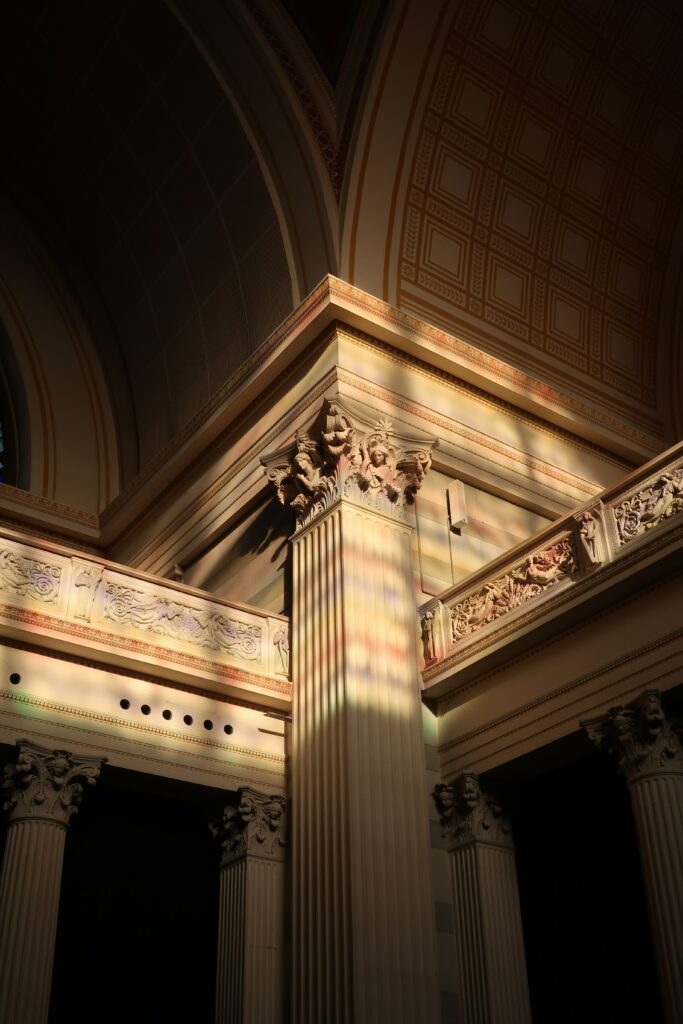 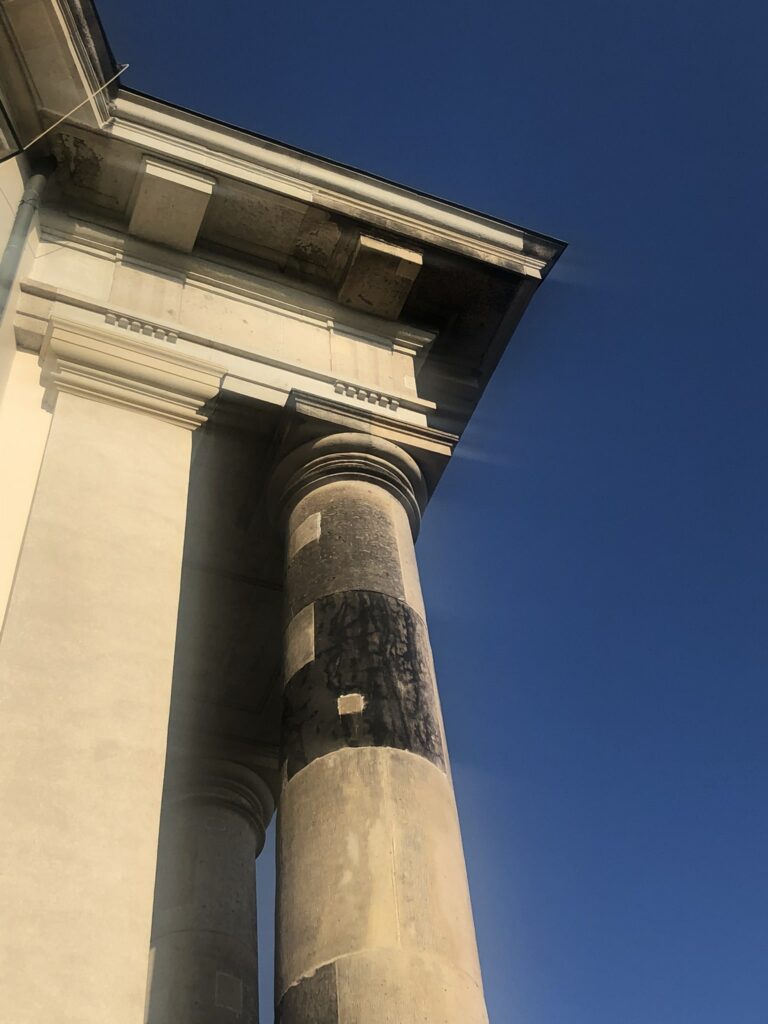 [The beauty of how Schinkel plays inside Nikolaikirche / Signs of April 1945 bombardements in Franzosische Kirche, that was repaired without hiding that layer of history]

Built between 1913-1917, as the residence of Crown Prince William and his wife Cecile, this final Hohenzollern palace was created in the style of an English country house, but resourcing to cutting-edge building techniques and newer materials for its time. In 1945, it was the chosen venue to host the Potsdam Conference. 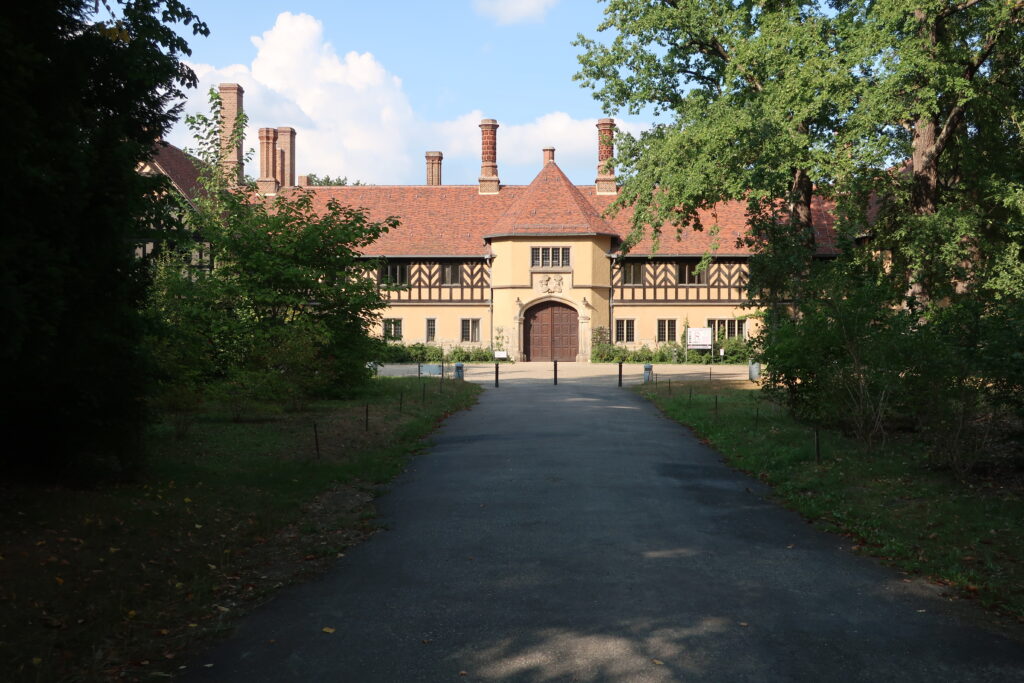 [The Cecilienhof Palace, seen from the New Garden]

The several days event counted with the leaders of the winning allied countries and their staff, finding refuge is this area of the city that escaped bombing and the massively destroyed capital. It is a magnificent place to learn more about this period of history and have a grasp of how WWII heavily changed the lives of people, countries and cities. 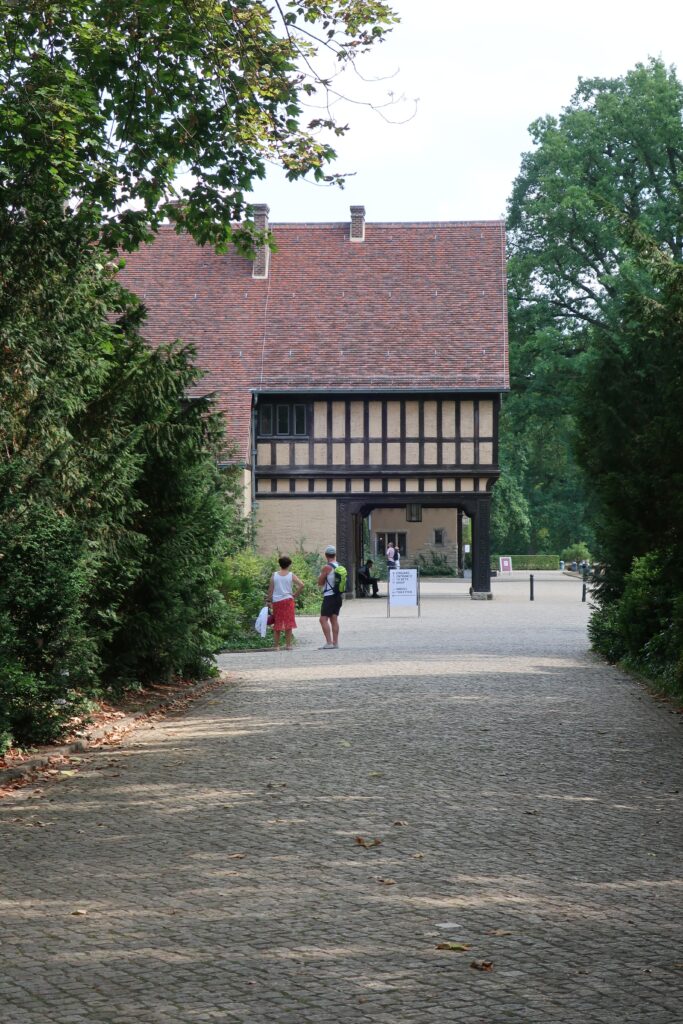 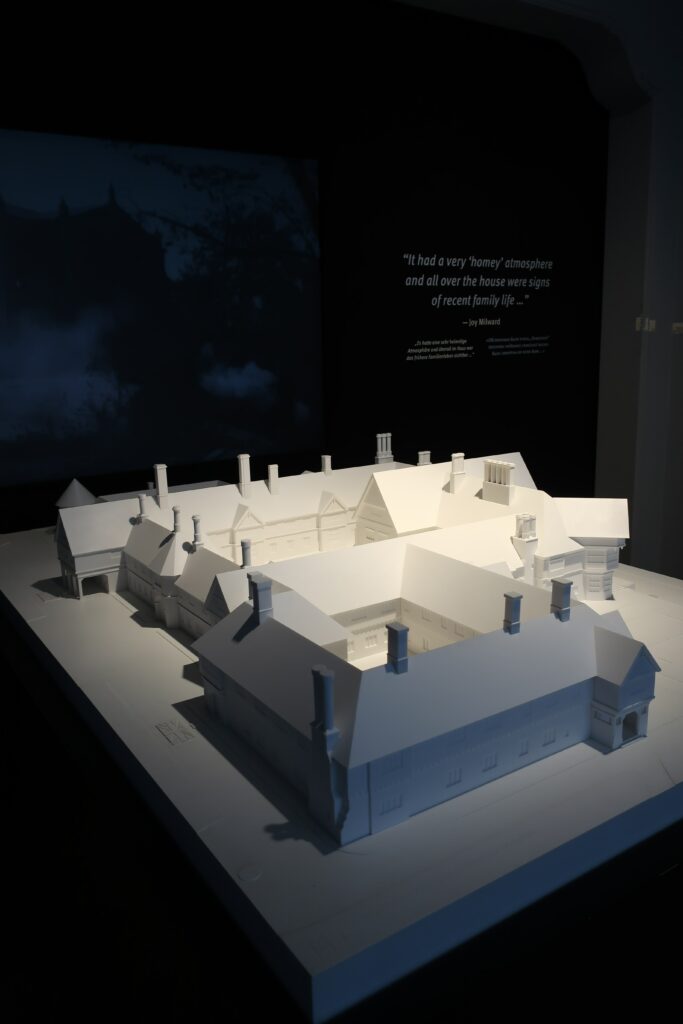 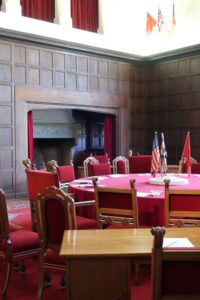 Nowadays, the palace hosts a permanent exhibition about the Potsdam Conference, guiding those who visit it through the chronology of the war, teaching about its intervinientes and why it was such a pivotal event in world history. 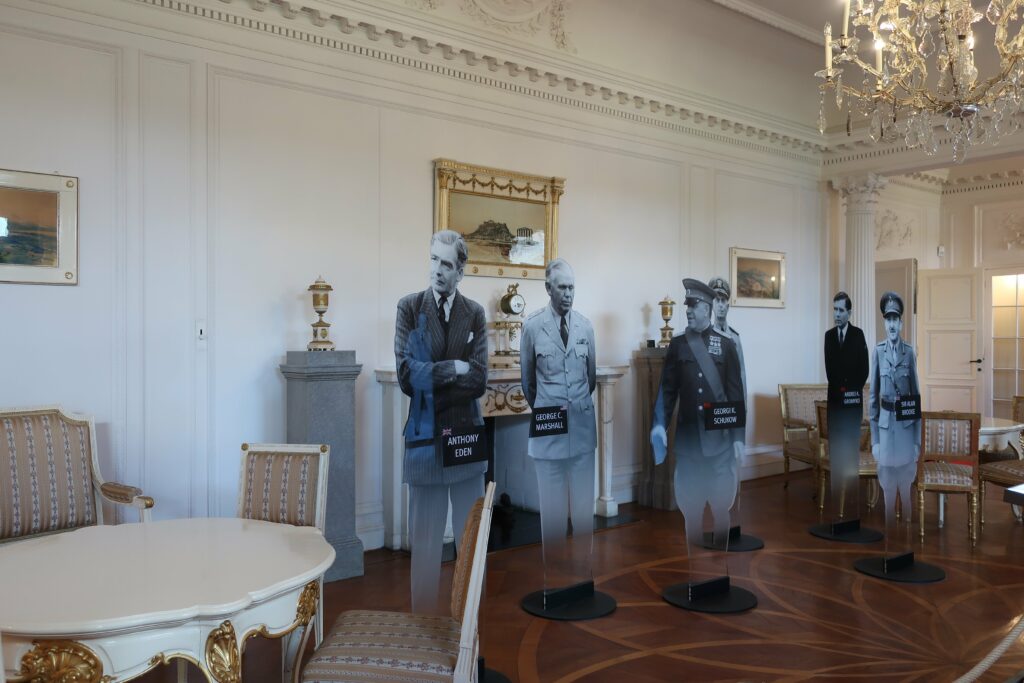 [Some historical participants of the conference, like Stalin, Truman or Churchill, depicted in the common room that preceded the meeting room]