I left Regensburg last Friday and headed up to Washington D.C., where my US trip began. My flight from Munich was easy and the jetlag not as bad as expected. So I had enough energy to do some sightseeing on my first weekend in the United States.

A big plus in Washington is that all the museums in front of the Capitol are for free! What a pleasure! As a big fan of modern art I visited the Hirshhorn Museum and its beautiful sculputure garden. One highlight was the wish tree in front of the building by Yoko Ono. Furthermore, the museum hosted a nice exhibition of the well-known and Japanese contemporary artist Yayoi Kusama. This impressing lady worked primarily in sculpture and installation and it was such a nice experience to see her work. Afterwards, I went to the Smithsonian National Museum of Natural History which was pretty crowded but worth the visit.

Before I left to Philly on Monday, I had the chance to visit the US Capitol. The guided tours there are also for free but you had to book a timeslot before the visit. The US Capitol is the national stage of the United States and the place where the country finds its common ground. Within the Congress American people are represented and even during the Revolutionary War the building continued to be built to make a statement of hope. This building is one of the landmarks of Washington D.C. and a symbol for the American democracy. Even if it is not a world heritage sight, it counts as a National Historic Landmark. The tour was really interesting and a great insight into the American history. The rotunda is the center of the building and the place where the dome can be found. There is also a painting showing the signing of the American Declaration of Independence which introduces my visit to the city, where it was signed: Philadelphia! (to be continued…) 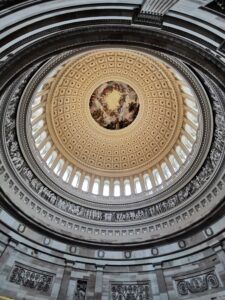 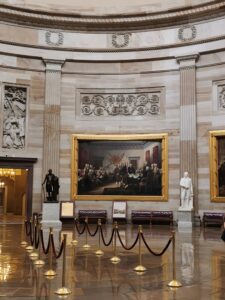