When I told my friends that I was flying to Philadelphia, most of them didn’t immediately know what to associate with the city. To be honest, I didn’t know much more about Philly either, except that Independence Hall is located there and that I had a great-aunt in New Jersey. But: this city is definitely underestimated! 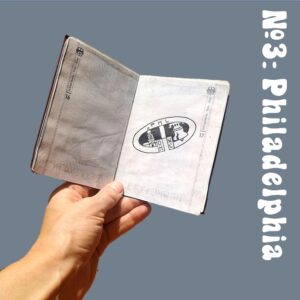 First of all: Why is Philly a UNESCO City? As already teased in the post about Washington, Philly is actually the city of the American Declaration of Independence. It was signed in the Independence Hall on 4th of July 1776. Liberty Bell is the name of the bell that was rung when the American Declaration of Independence was read in public for the first time in Independence Square in Philadelphia. Both landmarks can be found in the city’s Historic District. There are not many UNESCO cultural sites in the USA, more natural world heritage ones. In Philly, however, American independence was declared. That makes the city doubly exciting. To represent UNESCO even more in the US, there is an important institution: The GPA….

… My highlight was the meeting with Zabeth from the Philadelphia Global Association (GPA) (connected by Moni in Regensburg). This non-profit organization was also created to assist international cooperations, to promote the development of an international consciousness within the region and to enhance the region’s global profile. Zabeth and her colleagues Andrew and Sylta showed me around and welcomed me so warmly! First we’ve been to an offical flag raising in front of the city hall and in terms of the 31th anniversary of the Declaration of Independence of Ukraine. We also met Sheila there who gave a speech as city representative. This event was really emotionally and I was luckily part of it! Many Ukrainien people wore their traditional dresses. 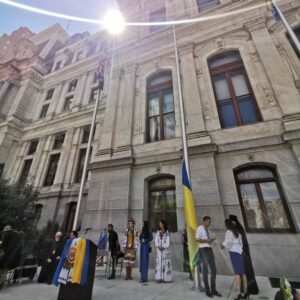 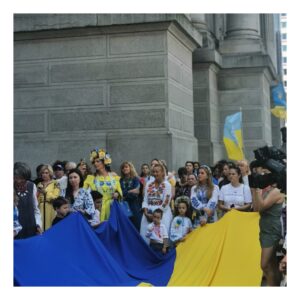 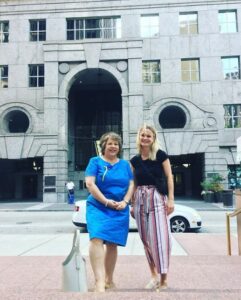 Afterwards I’ve been introduced to a really impressing project. Philadelphia is the first US city to launch a campaign to promote the United Nations’ Sustainable Development Goals (SDGs). In cooperation with many other partners, Global Philadelphia Association places murals all over the city to raise SDG awareness and they make the city even more colourful than it already is. Those art works are painted on canvasses so they are “movable”, which is pretty smart. The vision of the SDG Mural Project is that the murals become part of the city and the day-to-day life in Philly. Each SDG is accomponied by a research project by outstanding scholars at the top local universities. With the help of the SDG Public Art Project Map (& Anderw) I found two of the art works and I really love the idea of this project. I think it’s important to raise awareness of the SDGs, especially in the US, and the project connects different actors, which makes for a great symbiosis.

Besides the project, there is a lot (street) art in this city. I’m very impressed by Philadelphia’s creativity and vibe. I feel there is so much diversity in this city. Either you find it along the Cherry Street Pier with many different art galleries, the Queen village or in the Italian District. Furthermore, you’ll find interesting and historical facts on information boards places across the city. I really enjoyed my stay in Philly and would be happy to come back one day. Pictures speak louder than words at this point. 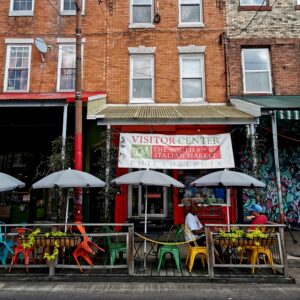 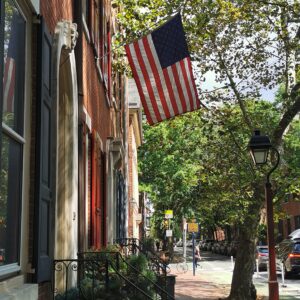 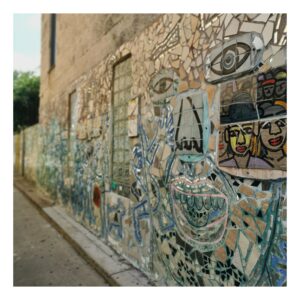