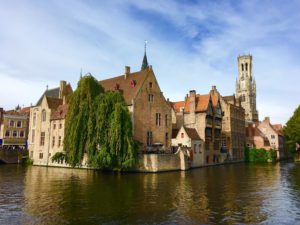 Entering Bruges felt almost like stepping into a real-life painting. It is by far the most picturesque city any of us have ever visited, with its cobblestoned streets, monumental churches, the chocolatiers crooked brick facades, the weeping willow trees lingering above waters, which mirror like surface is only occasionally broken by the currents of a swan. 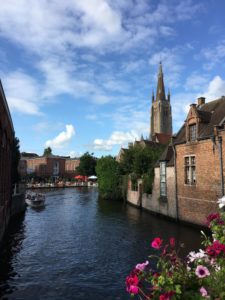 Crossing the streets you need seldom worry about passing cars but rather horse carriages and bikes. The air carries a sweet mixture of scents, from bakeries, confectioners, De Halve Maan brewery, and Belgian waffle parlors.

The historic center of Bruges which is under the protection of UNESCO world heritage, comprise of the famous belfry tower, burg square, basilica of the holy blood (where you can touch a vial supposed to contain Jesus Blood) the church of our lady (which is the second tallest medieval brick tower in the world), the intriguing Begijnhof (which local nuns still use as a cloister), Wijngaardplein and Minn 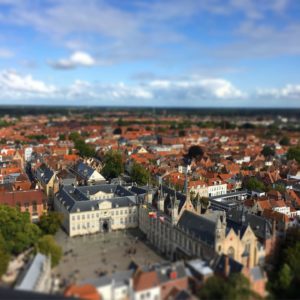 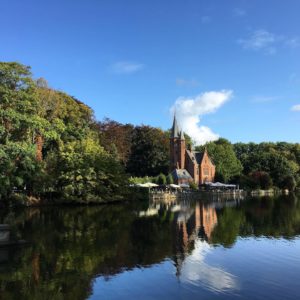 Bruges is historically significant for having been a nexus in northern economic trade. It was even a major trading post within the Hanseatic league. As is usually the case with economically strong cities with high fluctuations of external impressions, Bruges also became a centre for art in the Middle Ages, especially what is now referred as the Flemish primitives. Today the city still serves an important role fir Baltic and international trade, but is generally known as for being a tourist Mecca. 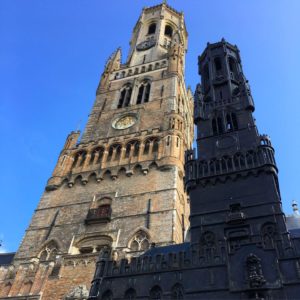 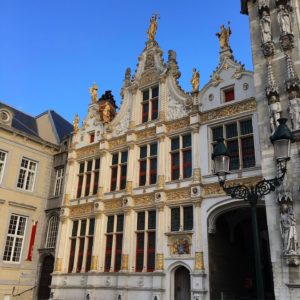