First and foremost, I have to admit that I have not only traveled to Brussels as a tourist but that the city has indeed become my current hometown in the last few months. Contrary to its many stereotypes of being an ugly or dangerous city given the social problems, I absolutely love Brussels. Why?

However, despite its international residents, I have felt that the city is an ethnically segregated one.

The well-known gems: Grand Place and the Atomium

Undoubtedly, the Grand Place is Brussels’ most important gem, exposing the city as a world heritage site and attracting thousands of visitors daily.

I am meeting Paula, who is in charge of the restoration of the Grande Place.

She shows me around the neo-Gothic “La Maison du Roi,” which perfectly reflects the heritage of the city and is probably the best starting point to fully understand the history of the place and how it has transformed throughout the last decades. 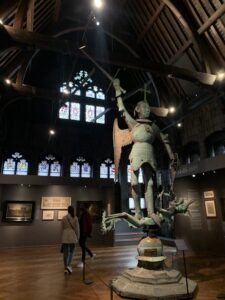 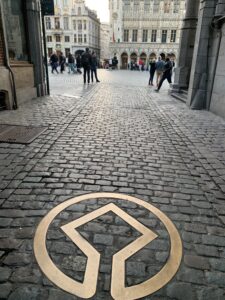 You can truly feel how the people working there, and their tireless efforts  foster the preservation of world heritage. Seven bronze UNESCO logo plates e. The grand place line is indicated bye pinpoint towards the grand place.  Do not miss out on the little, narrow streets and hidden, picturesque bars around the square.

Another must-see is definitely the Atomium, constructed in 1958 for the Brussels World’s Fair; it is located outside the city of Brussels. Yet the futuristic structure shall not be missed.

It is a very visitor-friendly, interactive museum—definitely worth a visit. This museum explores the paradoxes of Europe and its many facades. In addition, the horrors of war are discussed. … This aspect of the museum very much appealed to me because it prompts us to consider the question, “What is Europe?”

Another must-do is The Parliamentarium in the European Parliament, which takes you through European history and integration and looks into what the world and work of a European politician could look like.

We discuss the city of Brussels, and she explains its specific role as a world heritage city. She argues that in Brussels, cultural heritage is constantly renegotiated and is home to different communities. Given the political landscape and the impact of the organizations’ presence, youth in Brussels are generally much more active in the sphere of heritage. This simply makes world heritage more accessible and easier to follow.

During my time in Brussels, I hope I can take part in it and contribute to it. 🥰🤗