After a long night bus ride, I crossed borders to reach my sixth stop: Kraków! The city that already had the capital status is nowadays the second-largest in Poland. The capital of the country until 1596, Kraków has been throughout the centuries an important focal point for academic, economic, cultural and artistic life. 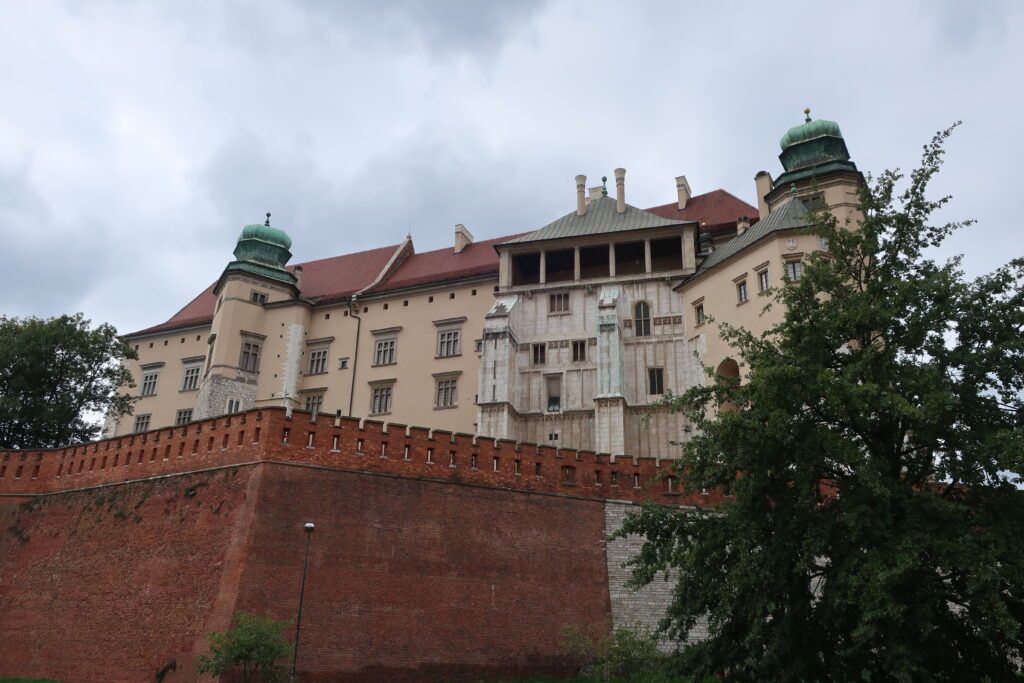 [A view of the castel hill in Kraków]

At first glance, the history of Kraków during WWII seems hard to believe. Even though, similarly to many other cities in the country, it witnessed a ghetto being built and all the pain and fear that followed during the hard years of the war, Kraków was  miraculously spared of mass destruction.

Kraków surrendered to the German Armed Forces without a fight, on the 6th September 1939. Only 6 days later, the German armed forces announced Kraków as an urdeutsche stadt (in English, an ancient german city), based on forged historical research, as the city was a strategical hub for agriculture and light industry than was seen as very useful by the Nazis.

Even at the end of the war, with Germany forced to leave the city behind due to the advances of the Red Army, the city survived an eventual intentional process of destruction by the Nazis, as unfortunately many other cities went through. Why? The reason does not seem to be fully known. 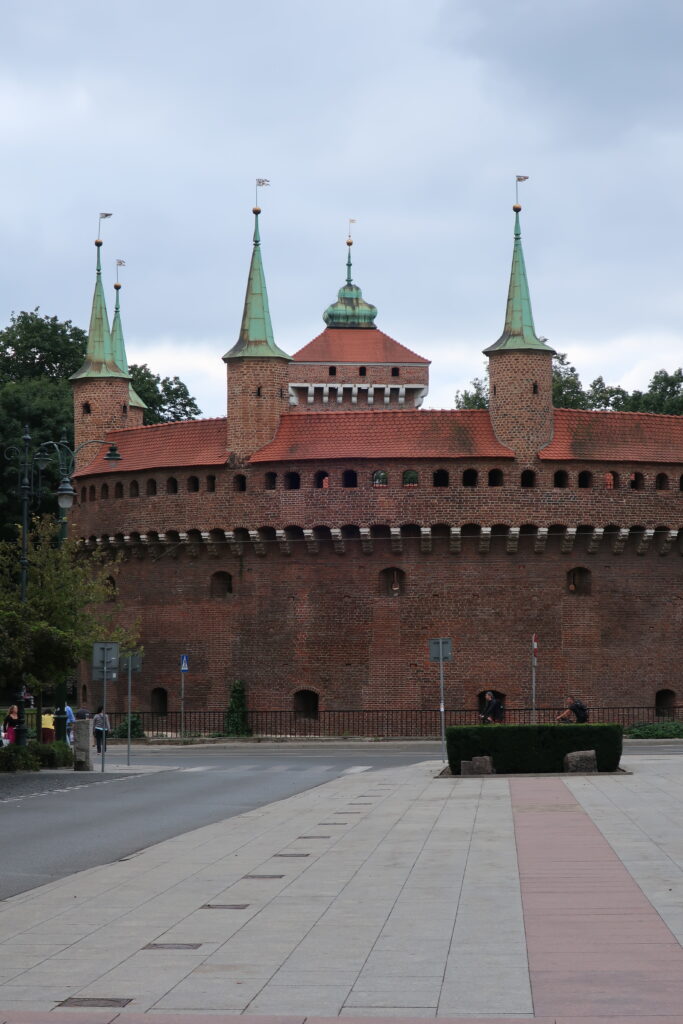 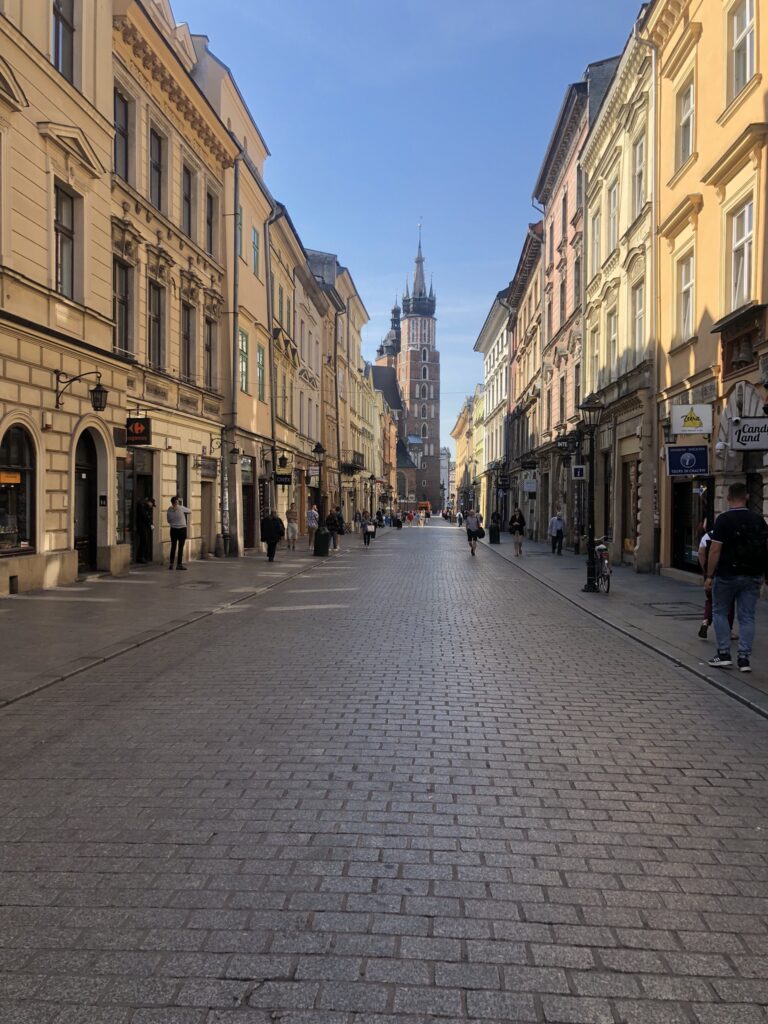 [The Barbican / On my way to the Old Town]

In 1978, Kraków became a World Heritage City as the Old Town surrounded by the Planty park, together with Wavel Hill, the town of Kazimierz and the suburb of Stradom were included on the first UNESCO World Heritage List. Barely modified since the Middle Ages, the historical city center holds various unique buildings such as the Cloth Hall and St. Mary’s Basilica and it is encircled by a fortification complex that still includes some of the original gates to the city.

DAY 13: A Spared City, but the Kazimierz

I arrived in Kraków very early on a Saturday morning, which allowed me to kickstart my visit to the city with a lonely walk around its center. Walking from the main train station to the old town, makes one wonder if he or she is going back in time. All seems to have been kept untouched by many, many centuries and it is impossible not to feel fortunate, enjoying a rare opportunity to witness an almost untouched town, walkable, where all little details were taken care of, in stark contrast with its new parts, recently built around it.

I entered the heart of the city through one of its main gates, right by the Barbican – a fortified outpost, part of the medieval walls, in marvelous red brick and Gothic-style. From there, only for a couple of minutes, I reached the Main Square, drafted based on the 1257 founding charter granted by Prince Boleslaw, that for long was the largest in medieval Europe – its sides are 200m long. 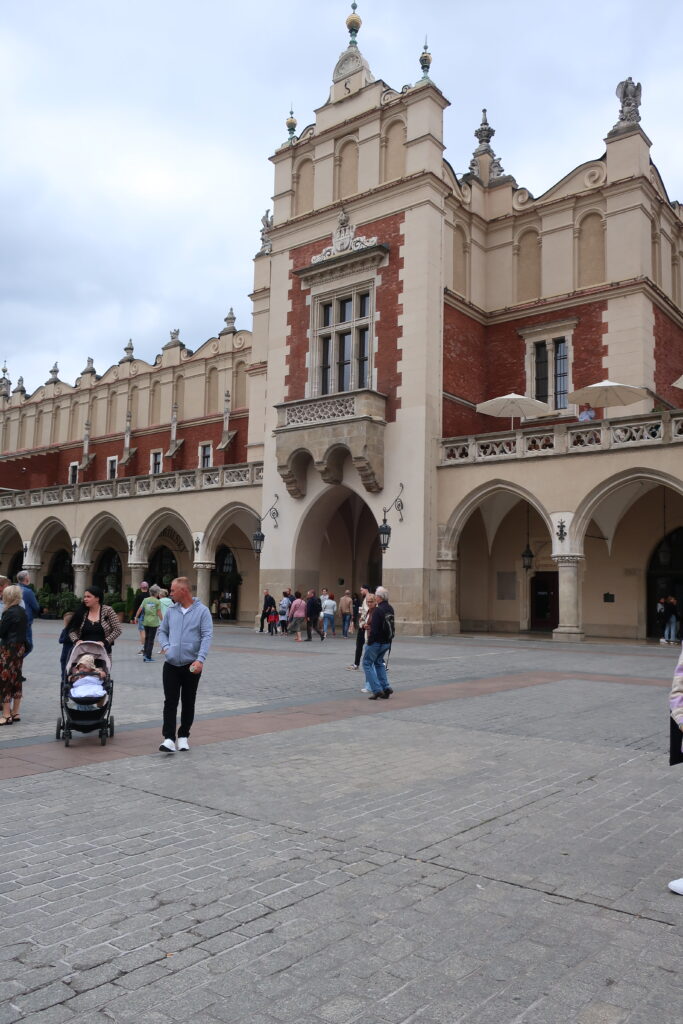 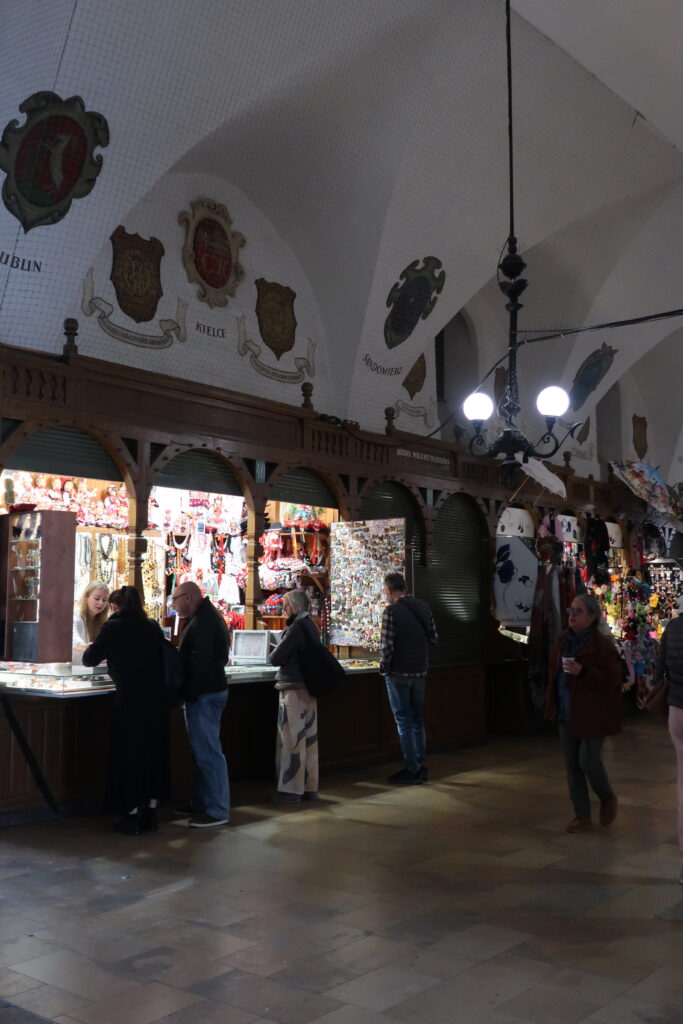 In the middle of it, stands the Cloth Hall – Sukiennice, in Polish – , once a major center of international trade. During the 15th century, when Kraków was still the capital of Poland, one could find exotic imports there as well as salt from the Wieliczka Salt Mine nearby. However, its importance decreased after the capital was transferred to Warsaw. Nowadays, the lower floor still hosts commerce but the top one became part of the museums of the city.

On the opposite side of the square, there is St. Mary’s Basilica, an important example of Polish Gothic architecture. The interiors are astonishing and richly decorated, with a rich blue ceiling where stars were painted, typical of its period. On Sunday mornings, a cornet player can still be seen playing on top of one of the towers, announcing that mass will soon start.

In the afternoon, I headed to the southern outskirts of the Old Town, to Kazimierz. Originally a separate city allowed by King Casimir the Great – from whom it took its name – in the 14th century, it was a place where ethnic Polish and Jewish cultures coexisted. However, during WWII, Jews living in Kraków were forced to relocate to Podgórze, just across the river, to the ghetto created by the German occupation forces. 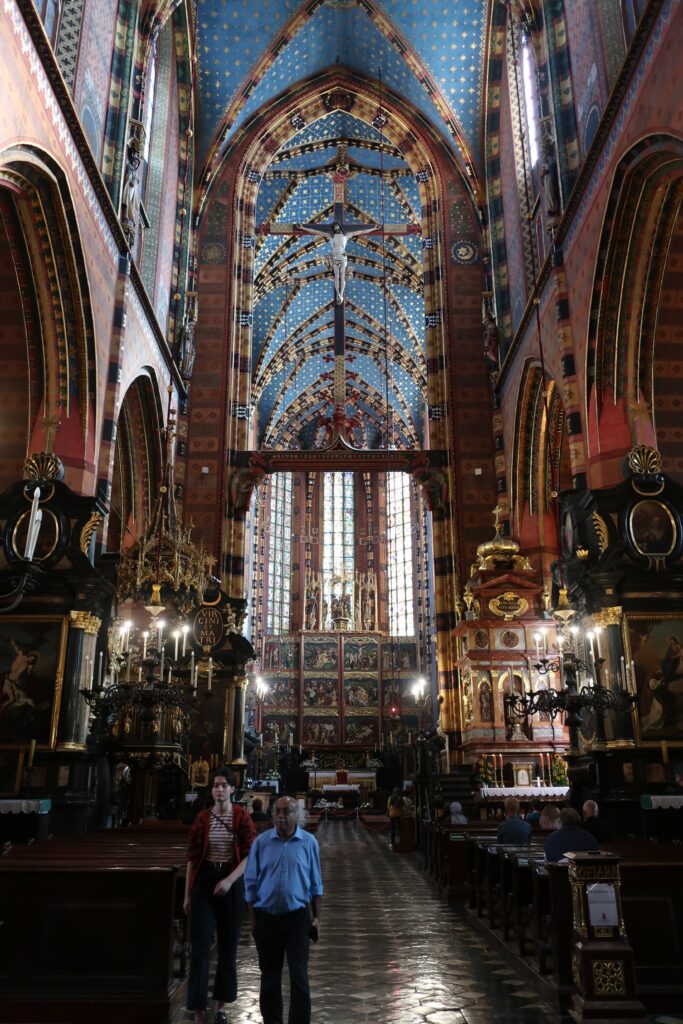 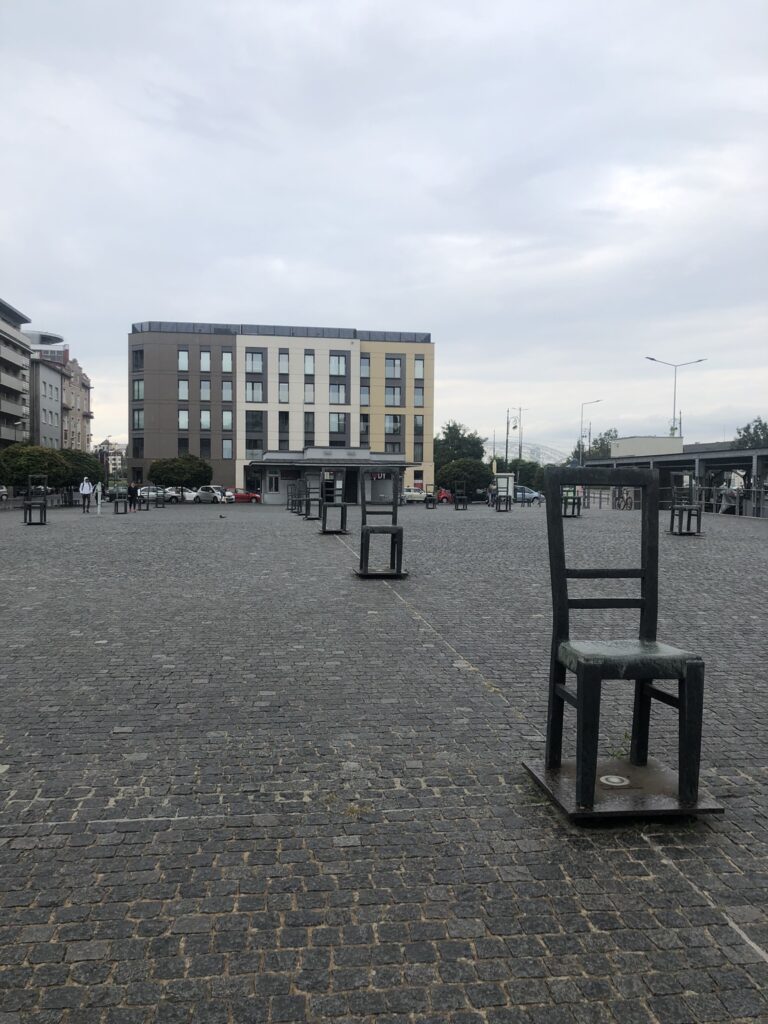 Today, traces of the ghetto are minimal, since the area was so beaten up that after the war, its reconstruction was mainly made from scratch. However, there are still many memorials witnessing the history of the neighborhood and how so many people were crowed, starved and forced to do slave work there.

Some are more obvious, like the lonely chairs at Zgody Square – today’s Bohaterów Getta Square –, each one representing thousands of jews that were here forced to gather and wait for their deportations, specially during the extermination of the ghetto between June 1942 and March 1943.

Others less, like the little pharmacy, now a museum on the corner of the same square: the Eagle Pharmacy. Established in 1909, it sold medicine both to Jews and to Poles. At the beginning of WWII, Tadeusz Pankiewicz, the son of the founder, a Roman Catholic, managed to get permission from German authorities to keep his business open and stay in the recently formed ghetto.

Soon, the pharmacy became a meeting point for the Jewish intelligentsia, where attempts to resist and to smuggle food were organized. Pankiewicz also bravely hid people inside during mass deportations on multiple occasions.

After the war, he kept running the pharmacy but, in the 50’s, it was nationalized under communist rule. Nowadays, an effort to recover its interiors to their state during the war was made and the building is now a branch of the Museum of Krákow. Inside, one can discover not only the different rooms that the pharmacy encompasses but also a complete exhibition that tells more about the harsh history it witnessed.

The second day in Kraków was time for more visits to sites that speak about the impact of WWII in the city, its story, its people and heritage. I made my first stop of the day at the first building of the Jagiellonian University. Founded in 1364 by King Casimir III, the Great, it is the oldest university in Poland. The original campus, located in the main city center, has a long history. During WWII, a handful of teachers were arrested here by the German occupation forces, in an attempt to weaken the institutions that represented Polish identity and culture. 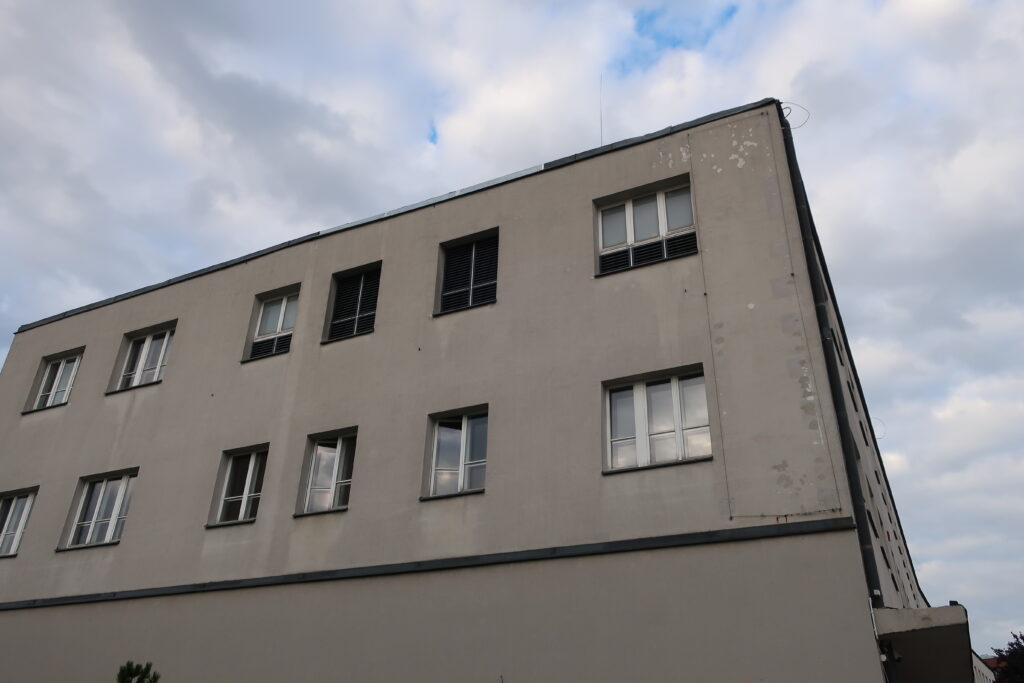 [The minimal design of the Schindler’s Factory]

In the afternoon, I got back to the outskirts of the city, near Kazimierz once again, to visit two other important historical sites. First, the Schindler’s Factory, which became famous due to the 1993 Spielberg’s movie. The industrial building, now also a museum, host the exhibition “Kraków under Nazi Occupation 1939-1945”, a very comprehensive collection of information and artifacts arranged in an interactive and compelling way. There, one can learn how the city changed radically during the war years, the laws passed by the German Nazis through the months that made like more and more unbearable for the inhabitants of the city and some hints of its state by the end of the conflict. 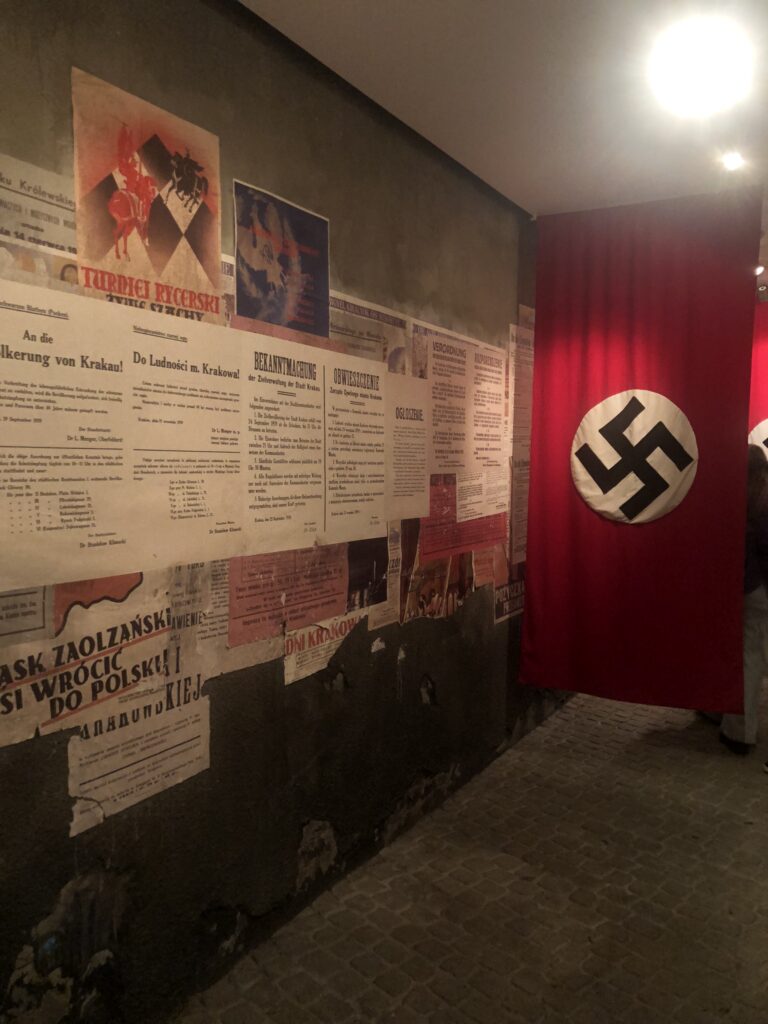 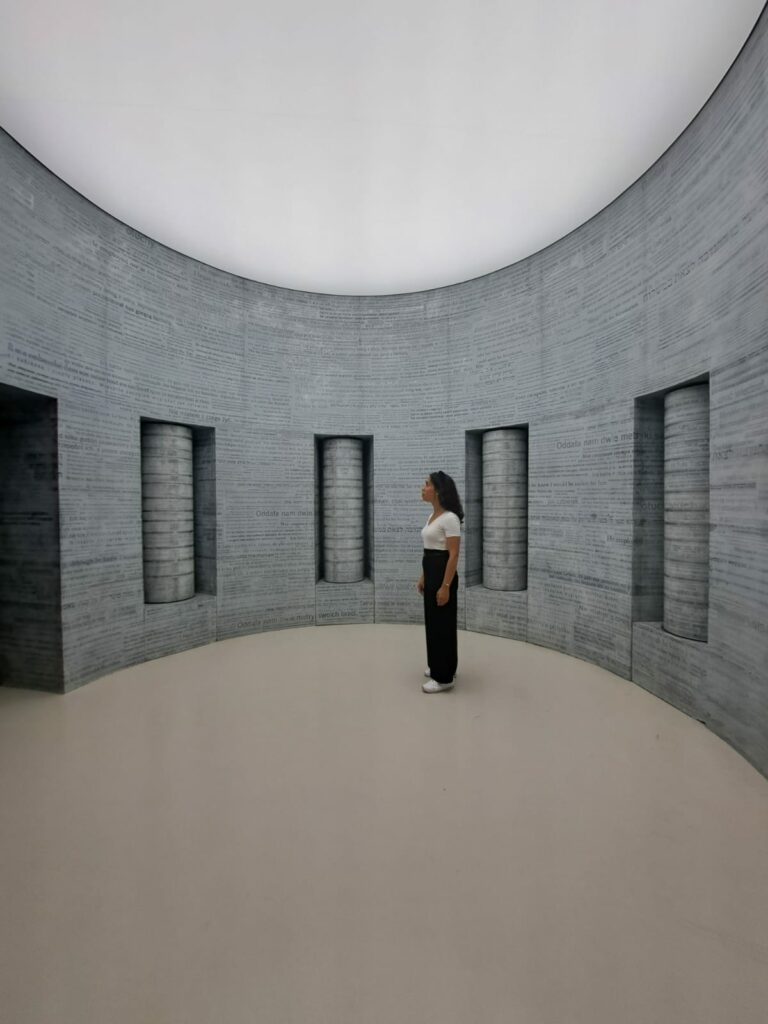 [Some rooms of the permanent exhibition, that I visited with my local Couchsurfing host, Piotr]

Later on, it was time for a bike ride to the Plászow Concentration Camp, a forced labor, transitional camp through which many Jews from Krakow passed by. Nowadays, not much remains, just a couple lesser buildings of the complex and a major memorial, erected in the middle of the now green empty field, in 1964. 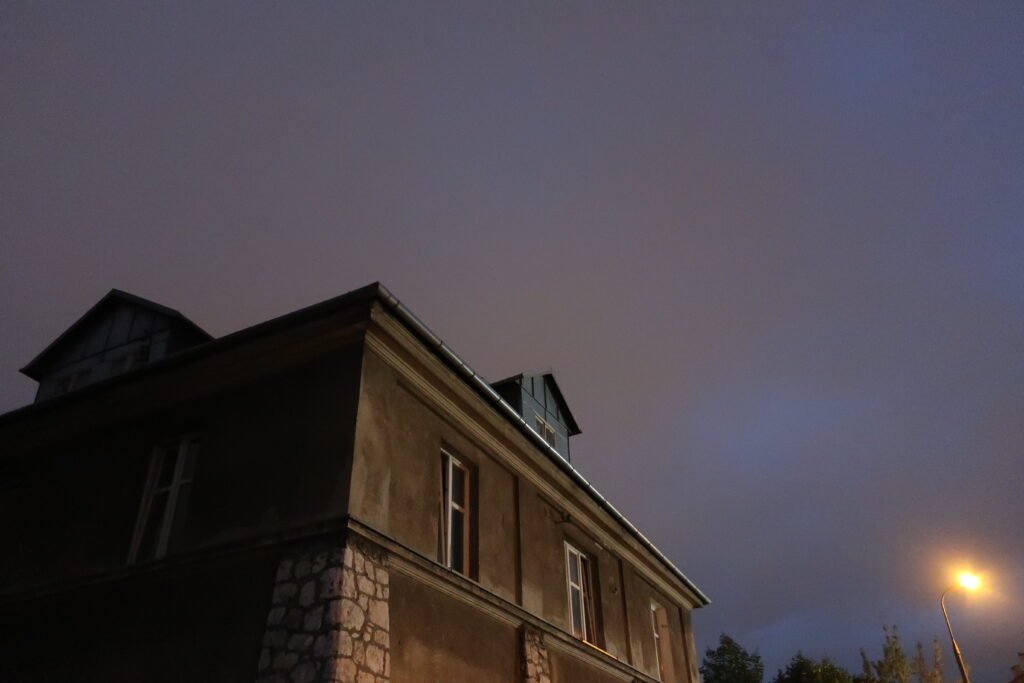 [The Grey House, one of the few remains at the entrance of Plászow Concentration Camp]

DAY 15: The Wavel Castle under the Nazi

With one morning left on the city, I did one last walk to visit the Wavel Castle. In one of the banks of the Vistula river, stands the millennial castle and its nearby cathedral, firstly built in the 9th century, by the first historical rulers of Poland. 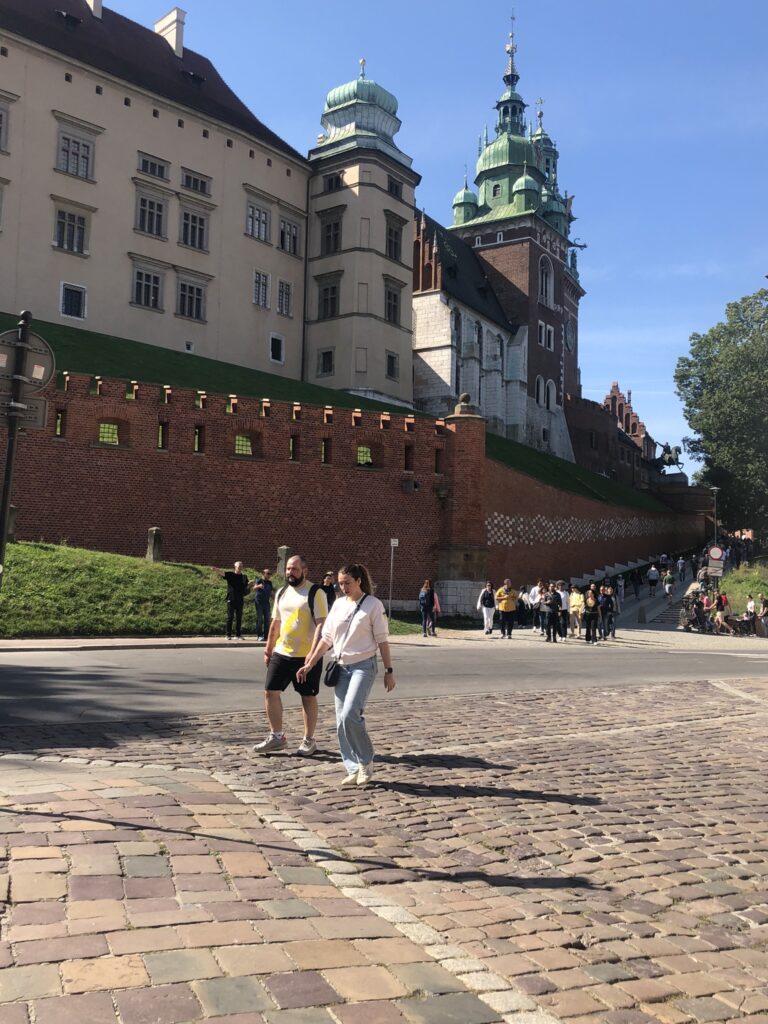 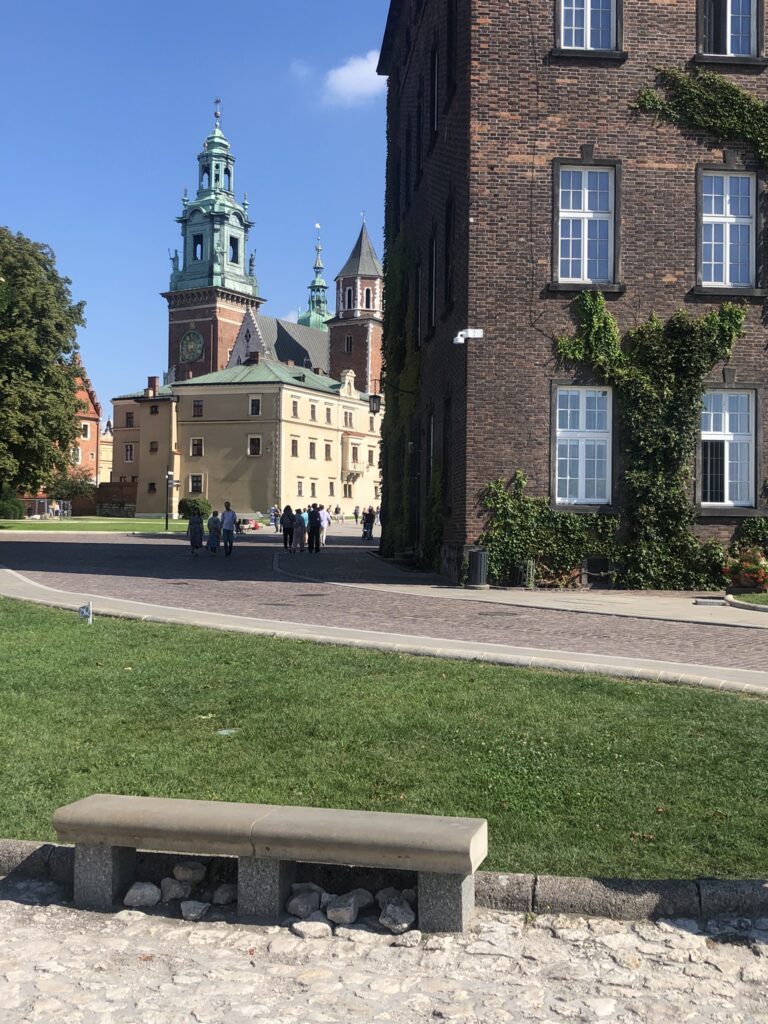 [The route to the Wavel Castel / Inside it, with the multi-stylistic cathedral on the background]

House to many dynasties throughout time – including foreign ones – it was also the accommodation choice preferred by Hans Frank, the assigned Governor General of Nazi German-ocuupied Poland. Many efforts had been made in the previous decades to establish the castle as a main symbol of the recently formed Republic of Poland, through two main architectural reconstruction projects done by leading polish architects of the early 20th century, profoundly supported by the local population.

However, during the occupation, the complex suffered major alterations to fit the eccentric lifestyle led by Frank – inconsiderate additions were added to the hill, over important archeological remains, to host his entourage and important art pieces and items that were part of its interiors were either destroyed, altered or looted. Today, after many interventions to restore the splendor of the castle, it is open to visitors and hints perhaps on how, in the middle of a razed Poland, Kraków somehow managed to survive in what we could describe as good shape.