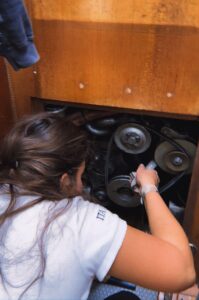 The quiet of Enkhuizen is perfect to check the engine before leaving. We noticed that the engine transmission belt needed to be tightened. Therefore Gloria took her toolbox and tried to fix it. After many vain efforts, she did it !!

Thanks to this completed mission, we were full of energy and ready to start our daily journey. 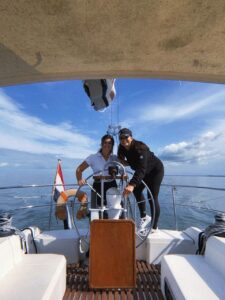 The sea was flat and there was no wind at all. Therefore, we decide to navigate without setting the sails. As soon as we left the harbour we passed through a new dike that was luckily already open. After that, we found ourselves in a magic atmosphere. All around us, the horizon line was dissolved and we could just see some light figures.

While boating, a stronger smell came out from aft. So, we started looking for what was wrong and finally, we discover there was a leakage of water in a part of the engine. After collecting some advice from a mechanic and Gloria’s expert dad, we decided to keep on and fix everything in Amsterdam, our daily destination. 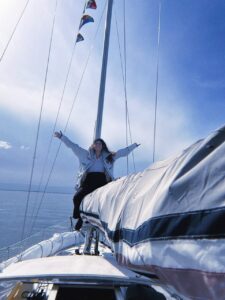 At that time we started being super enthusiastic about our entrance into such a big city. We switched off the music e called all the city’s harbours to find a spot.  Luckily a cosy little harbour welcomed us. It is called “Sixhaven” and is located in the centre of Amsterdam on the river ‘IJ’ opposite the Central Railway Station. The Sixhaven is situated near the centre of Amsterdam, which can be reached by a short ferry trip. Once we moored the boat, our neighbours gave us a present two new life jackets. We felt so well received. 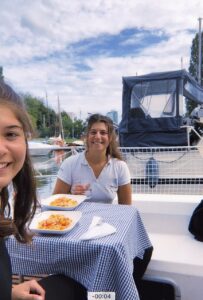 Finally, we had a restful lunch on board and a little power nap just to be more energetic. Once rested, we rode our bikes and went around the neighbourhood called Noorderhof and located in Amsterdam’s Nieuw-West district, formerly Geuzenveld/Slotermeer district. The urban design was produced in the 1990s by the Berlin office of the Luxembourg architect Rob Krier and his partner Christoph Kohl in collaboration with the housing association Het Oosten and the city district. The construction of the district, which has 230 homes, started in 1995 and was completed in 1999. 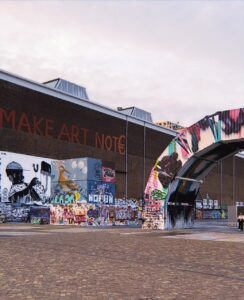 Another peculiarity of Noorderhof is street art. The neighbourhood is mostly a shipyard with a lot of vacant structures. It has developed over time into a cultural masterpiece for the city of Amsterdam and has a ton of beautiful graffiti art and even a museum. Some artists continue to reside in these structures or in defunct trams. Numerous well-known artists have completed various pieces here. Edward Boer, who is well- 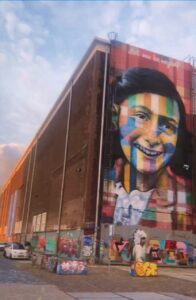 known for his container street art, is one of them. The iconic 24-meter-high mural of Anne Frank was created by Eduardo Kobra, another well-known street artist. Last but not least, there are a variety of other painters that are highly renowned for their murals, like David Walker, Logan Hicks, and Shepard Fairy.

Getting around, we have not only seen 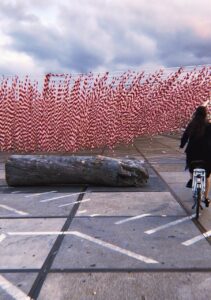 magnificent murals, but also new installations. For example, we came across the “Barrier Tape”. With this installation, SpY, the artist, transforms a ubiquitous urban object, which is frequently used to control people’s movement, into an intriguing work of art that invites viewers to engage with the installation. The interplay between the artwork and its natural surroundings is highlighted. Visitors can round and circle around the installation, which creates a large, constantly shifting surface. The ribbons, which are suspended on parallel strings and are driven by the wind, swing together as a single unit, producing a tremendous sea-like sound and a wave-like movement throughout the music.

It has been magic to go through it.

To conclude our day, we had a slow time chilling in pub Pllek with an outdoor area on the sea. Then we enjoyed the golden hour with a panoramic view!