The sun is up and the Dutch landscapes look gorgeous from the window of planes and trains on which Allegra is travelling to reach Gloria. 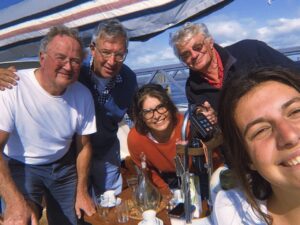 The journey from Milan to Harlingen lasted many hours, but still, we managed to be together at midday.

Before leaving the Harlingen harbour, we had a coffee on board with three gentlemen just met on the dock. We immediately discovered to share many interests as demonstrated by their membership in Europa Nostra, the leading citizens’ movement to protect and celebrate Europe’s cultural and natural heritage. Europa Nostra is the voice of all who believe that cultural heritage is vital for our economy, our society, our culture, our environment, our well-being and for the future of Europe. Definitely, something we agree with! 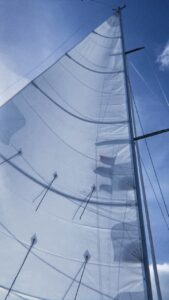 So, after these fascinating chatting, we finally started sailing and set the sails. It has been Tetide’s first time and intense emotion for us.

Unfortunately, we had some trouble in rolling the genoa: Gloria tried to fix it while Allegra was helming, but it was not possible to solve the problem. Nonetheless, we had to navigate only with the mainsail, we were in good mood. We were extremely happy to have started finally our travel and to be together again after a long time. 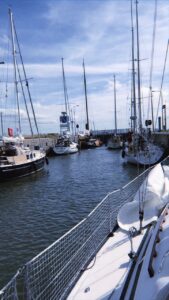 En route to Enkhuizen, we had to cross the biggest Holland dike.

The Afsluitdijk is a major dam and causeway in the Netherlands. It was built between 1927 and 1932, and it stretches 32 kilometres from Den Oever in North Holland province to the village of Zurich in Friesland province, with a width of 90 meters and an initial height of 7.25 meters above sea level.

We were so curious about such great engineering work that we explored a bit it’s history.

Flooding was a possibility in the Zuiderzee region. Due to this, the Zuiderzee was already going to be sealed off in the 17th century. In 1892, engineer Cornelis Lely created his initial blueprint for the Afsluitdijk. The dyke was 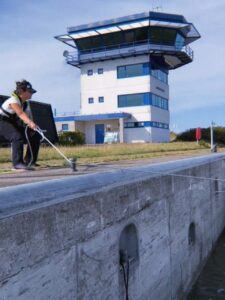 necessary to block off the water and lessen the likelihood of floods. The potential to establish additional agricultural polders with the land was made possible by the construction of the Afsluitdijk, which was advantageous for the economy and the food supply.

The dyke was not only historically interesting but also entertaining from the sailing perspective. Once we arrived in front of the dyke, we had to wait for the traffic light to become green. We were not alone: a lot of other boats were waiting with us. And as the dam has been opened, everyone went chaotically into it. It looked like rush hours in the city centre! 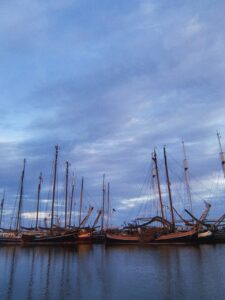 Then, we kept on sailing until Enkhuizen, where we arrived at 8 p.m. This little town welcomes us with a parade of typical tall ships at the entrance of the harbour. They are known as the “Holland Sail fleet” and are composed of a variety of faster clippers or traditional tjalks – a dutch type of barge with a flat bottom instead of a keel. Each ship has a unique layout allowing for different numbers to stay on board.

Luckily, we found a place in the harbour that allow us to see these boats during the golden hour!

After appreciating this view, we have taken a tour of the town on our bikes.

There are places in Enkhuizen where it appears as though time has stopped. The ambience of the XVII century is still present throughout the city. Indeed, Enkhuizen was one of the most prosperous cities in the Netherlands in the 17th century. It gained power and influence – together with the city of Hoorn – as a member of the Dutch East India Company. 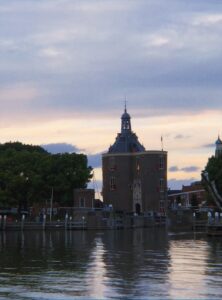 Happily, numerous stunning fortifications and monuments have survived. For instance, we had the pleasure to have a drink in front of the beautiful “Drommedaris”. It is the southern entrance to the city of Enkhuizen. The building, which was originally on the Westfriesian dike was constructed as a fortification structure at the entrance to the Old Harbor. Later, the dike section close to the Drommedaris was removed to make room for the new harbour. The building’s ground floor chamber and the artillery cellar both date to 1540 and are parts of the original structure. Both rooms have cannon holes in niches along the walls where cannons that could cover the harbours formerly stood. A rib vault is present in the upper room. There was a structure with still-existing prison cells on the roof above the building.

The discovery of Enkhuizen has been the perfect ending for one of the longest days ever.