On my last day on my own, I woke up to quite a stressful realisation. 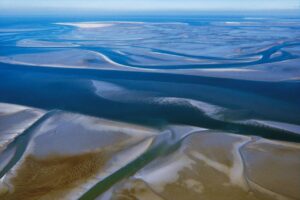 The Wadden Sea is one of the world’s largest tidal areas. The region stretches across three borders, from  Den Helder to Danish Esbjerg. The Wadden Sea is a one-of-a-kind see part of the UNESCO World Heritage. At least twice a day, the world changes. At one point, you come across a kilometre-long stretch of mud flats. The next thing you know, everything is submerged. The weather is frequently violent and difficult to predict. You must adapt if you want to survive. And it looks like Allegra and I will need to start our trip adapting as well. In fact, on top of the normal tide tomorrow Harlingen will experience another exceptional high tide from 10:20 to 14:40. 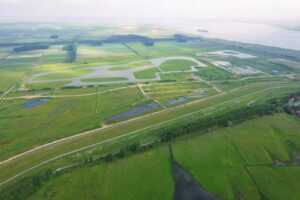 Therefore tomorrow we will not be able to leave the harbour as soon as Allegra arrives around 12:30 as the two sluisen (dikes) will be closed in order to protect the city of Harlingen, its canals, and the whole countryside behind. In fact, the main characteristic of Dutch geography is the flatness of the land: about half of the territory is less than one metre above sea level and a substantial part (27% of the total area, where 21% of the population resides) is below sea level. The lowest point, 6.7 metres below sea level, is located near Rotterdam. The highest point, the Vaalserberg, has a height of 321 metres and is located in the southwest, at the convergence of the borders of the Netherlands, Belgium and Germany. Today, 65% of the Netherlands would be underwater without the system of dikes, sluices and canals that regulate its level: a cohabitation painstakingly built over two thousand years of complex relations between man and nature. A polder is a Dutch invention that changed the physiognomy of the Netherlands forever and has been used in various other parts of the world since. Polder is a Dutch word that originally denoted a plot of grassy land that emerged from shallow marshes, land of this kind, later reclaimed, reclaimed is now called polder. This is how the use of windmills developed, around the 17th century, which used the power of the wind to operate the pumps with which to draw water from the polders. To increase the land needed for agriculture and a growing population, the Dutch built bigger and bigger dams and canals. For the past sixty years, everyone has had their feet dry and agricultural land, nature reserves and housing areas have increased without harming the climate. If one compares two maps, one from the 14th century and the other from the present day, one realises that 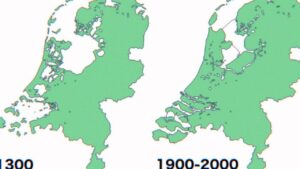 seventeen per cent of the country’s surface area has been claimed and obtained by water. After all, place names tell the story of centuries of Dutch engineering: ‘dam’ means dyke and the major cities have names associated with the first, ancient defence works. The Dutch have a unique bond with water, their best friend and most fearsome adversary. Economic prosperity has historically come along the waterways, a valuable element not only for trade but also for creating energy and for an agriculture that is now the world’s second-largest exporter after the United States. Water has, moreover, caused tragedies in the past, the last one in 1953. The flood came from the North Sea and eight thousand three hundred and sixty-one people died. The water swept away nine per cent of the cultivated area. 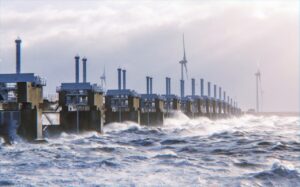 The Delta Works project defends the Netherlands from the enormous amount of freshwater they are crossed by and the salt water they are totally surrounded by. Thirteen large dykes have been built, together with sluices, tidal barriers, polders, and artificially dried land, most recently an entire province, Flevoland, in 1976. The Delta project, as far as large structures are concerned, was completed in 1997 and is characterised by its ability to give space to water when it is not dangerous. The work as a whole has been declared one of the seven wonders of the modern world by the American Society of Civil Engineers. Such a high level of vigilance and protection is not improvised: the windmills, with their ability to pump water, are a symbol of the early efforts of the Dutch to protect themselves. The nineteen windmills built around 1740 near Dordrecht, in Kinderdijk, have been declared by Unesco as a common heritage site of outstanding universal value. The Zuiderzee, the gulf called the South Sea, was transformed into a lake in the last century: in 1918, civil engineer Cornelius Lely’s project was also approved after several floods, which put an end to the doubts of part of the public. 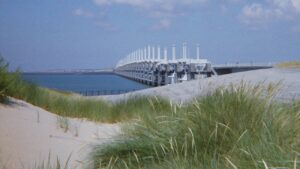 All defence works are a compromise with nature: the dams allow, except in critical conditions, the normal flow and, in this way, clean water enters and polluted water leaves. The barriers have made room for large green areas: the Eastern Scheldt National Park has been carved out of dunes and sand and mud flats. Open dykes allow fish such as salmon or trout to migrate through special openings. More space is being created for some of the rivers to balance the impact of the works and also to create freshwater reserves that, it is estimated, will soon be precious. This is why the project involves the periodic flooding of some land considered indefensible and no longer inhabited. Living with water and even in water: a futuristic answer, but one that is very trendy, is the floating houses, usually, high-quality villas or duplexes, often designed by well-known architects, passive in terms of energy and super-technological in terms of equipment. The visual impact is remarkable. Indeed, environmental care, according to former Delta Works commissioner Peter Glas, must be taken responsibly, looking at the facts and listening to science. “We deal with, and prepare as best we can, even hypothetical scenarios. Even if the sea level were to rise by two metres.” 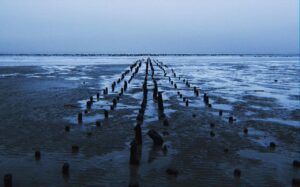 On top of that, in the North Sea, the currents are very strong and parallel to the coast. The sea is shallow and very flat, so much so that it looks like a continuum of land. The Wattenmeer (the sea between the coast and the Frisian Islands) has a depth of about 30 metres, while in the more central area of the North Sea it is about 200 metres deep. The Mediterranean Sea can be up to 4000 metres deep. The North Sea is therefore characterised by the large difference between the Flut (high) and Ebbe (low) tide. This major difference is due to the currents parallel to the coast and its shape. The tides depend on the attraction that the moon and the sun have on the earth. A lunar month lasts 28 days and is divided into four weeks in which the phases of the moon alternate: full moon, first quarter, new moon and last quarter. Each week the moon is in a different position in relation to the sun: there is a maximum tide in the full and new moon phases, i.e. when the moon and sun are aligned on the same axis. In this case, the vectors of the moon and sun add up and the tide is called a sigiziale. There is a minimum tide in the first and last quarter phases i.e. when the moon and sun are perpendicular and not on the same axis. 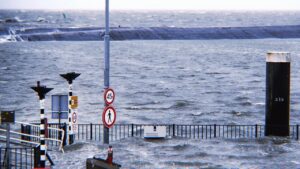 Tomorrow we will not only have flut tide, but an exceptionally high one, a trend more and more common in the Netherlands because the sea level has risen by 12 to 20 centimetres between 1902 and 2010. The rate at which sea levels are rising has accelerated. It has risen twice as fast in recent years as it did in the twentieth century, at a rate of 4 to 5 millimetres per year. The rate at which the sea level is rising also continues to increment. The study “Effects of sea-level rise on tides and sediment dynamics in a Dutch tidal bay” demonstrated that sea-level rise (SLR) not only increases the risk of coastal flooding, but it also has the potential to change tidal regimes in estuaries and coastal bays. 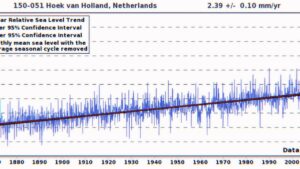 The study considered the impact of SLR on tidal dynamics in the adjacent North Sea. The findings show that compared to the nearby shelf sea, the bay experiences higher increases in tidal amplitude and stronger nonlinear tidal distortion as a result of SLR up to 2 meters. Tidal asymmetry during SLR up to 2 meters influences an essential part of sediment transport. The altered tidal asymmetry may result in increased export when merely taking into account sand bed-load transfer, which could have effects on coastline management.

As a result, I will simply need to leave Noorderhaven earlier in the morning and dock outside the dike on the incredibly high Waddenzee while waiting for Allegra’s arrival. Thankfully the harbourmaster will be my crew for a few minutes of support, and the Harlingen harbour authority will allow Tetide to dock right outside the dike, basically in front of the train station. Not too bad at the end of the day, but not thinking about the tangibility of climate change impact is impossible.