After a morning dedicated to accounting and general boat maintenance, I got confirmation of a very sweet opportunity. 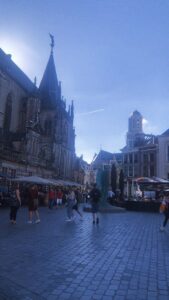 Fons Janssen, the Coordinator of the European Climate Pact Ambassadors of the Netherlands, Belgium, and Luxembourg was visiting Mello and offered to spend some time with me offering moral support and guidance in the beautiful city of Zwolle. Excited by the opportunity of being finally able to meet him in person after many calls online and emails I accepted. After having – as always – jumped on the train right before it left from Harlingen Haven I enjoyed a peaceful ride through the Frysian 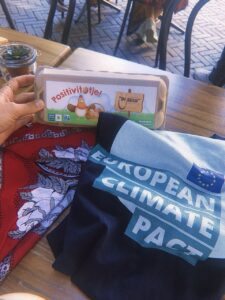 countryside. At my arrival in Zwolle Central Station, I had Fons waiting for me on the spoor (platform) and bringing energy as well as three much-appreciated gifts. The first one was a batch of free-range chicken eggs coming from his family farm Zorgboerderij de Haam, he also kindly brought me a black and white decorated red bandana, actually a farmer’s handkerchief, and finally a t-shirt of the European Climate Pact. 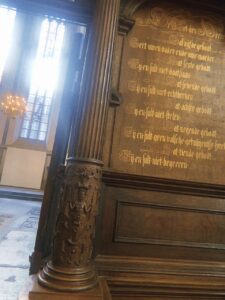 The ancient cities of the Hanseatic League have preserved to this day a culture unparalleled in Europe, from Germany to the Netherlands to the Scandinavian countries. Zwolle, in the Netherlands, is one of them. The current capital of the province of Overijssel, with 115,000 inhabitants, is located about 120 km from Amsterdam and very close to another Hanseatic city, Kampen. Zwolle is not a seaside town, as perhaps its history might suggest; the powerful German league chose it for its river connections: today the city is situated on the waters of the Zwarte, a small river that flows into the river Ijssel, but at one time this small hilly area was surrounded by three rivers (I]ssel, Vecht and Zwarte). The name Zwolle derives from Suolle 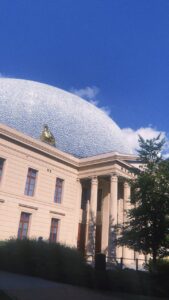 (hill), which was given to the town immediately after its foundation, which took place in the year 800 by merchants from Friesland and the troops of Charlemagne. In 1294, the city became part of the League and thus in 1361 took part in the war against Valdemaro IV of Denmark. In medieval times and especially in the 15th century, the city flourished economically, thanks to the trade brought about by membership of the league; art and culture followed as usual. Many palaces built in the period – sadly still – known as the Golden Age can still be admired in the old town, bearing witness to a rich and prosperous history. 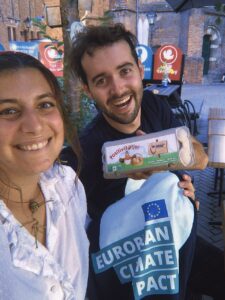 Immediately on a first visit, Zwolle appears as a lively city with many opportunities and a vital economy. Easily accessible by road, river and rail networks. Just north of the railway station, we find a bought medieval centre. Most of the ancient walls that once surrounded it have been demolished, but the defensive channel is still clearly outlined. Within walking distance of each other, one can find many old buildings and picturesque streets. Fons and I firstly enjoyed a coffee in Nieuwe Markt before a chill walking tour in

the city centre. The first sight we observed was Grote Kerk which is located in the centre of the Grote Markt square and is also known as the Sint Michaëlskerk church. It is a large sandstone building and can be regarded as one of the most unfortunate churches in the country: it was struck by lightning three times in less than 150 years. Inside the church, there are some examples of Renaissance sculptures and an organ that dates back to 1721. The rest of the church is straightforward in style compared to other Dutch churches. The Hoofdwacht is a beautiful building attached to the Grote Kerk, built in 1614 and 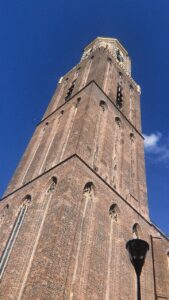 formerly used as the city’s guardhouse. Public executions were only carried out outside the Hoofdwacht. At the front of the building is an inscription with the text ‘Vigilate et Orate‘ (watch and pray), perhaps a warning when considering the terrible punishments once carried out here. One of the places we mostly enjoyed were the Onze Lieve Vrouwekerk (Church of Our Lady) located just outside the Ossemarkt, is an old Catholic church from 1399 with a difficult history. In 1580 it was closed to Protestants and was used for various purposes, was later returned to the Catholics and

reopened in 1809. The structure has a neo-Gothic style and is adorned with an interesting tower known as ‘De Peperbus‘, one of the tallest church towers in the Netherlands. The Doopsgezinde Church, a large church located at Wolweverstraat 9, is one of several churches created by members of the ‘doopsgezinde Societeit’ (Mennonite Christians of l Anabaptist sentiments). The church was built in the early 17th century and was extended and renovated in the late 1800s. We walked by the Museum de Fundatie and its amazing round-tiled roof before getting back to the Sassenpoort: a Saxon gate from 1408 located at the end of the Sassenstraat. It was originally built to protect the southern entrance to the city and is the only surviving medieval gate. The brick building with five spires currently houses exhibitions on the history of the town and it represented the perfect background for a lovely institutional picture. 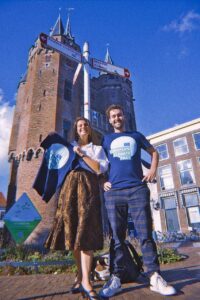 Find and I enjoyed an early dinner again in Nieuwe Markt during which we managed to better understand how we could cross our actions and he shared with me exciting plans for the European Climate Pact Ambassadors community. I caught the train back to Harlingen and had an early night. Already planning tomorrow and the preparations for Allegra’s and my new departure for Navigandum per hereditatem.