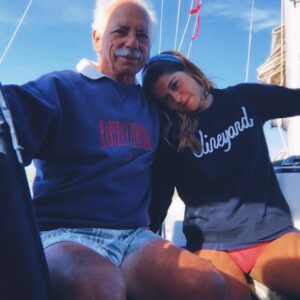 Allegra confirms she will be joining Navigandum per Hereditatem as of Tuesday! She has recently graduated and was looking for something meaningful to devote her time to and she managed also to bridge it with her passion for sailing coming from her grandfather.

This information sparked new enthusiasm in me and I gathered the necessary energy to adjust the trip and make the best of this stay in Harlingen. 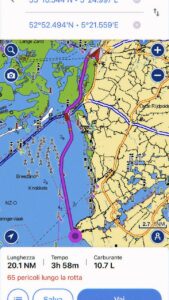 The morning was devoted to replanning the whole trip as the days that will be spent in Harlingen will delay the sailing too much and will prevent us to be in Bruxelles and Bruges in time for our meetings. So instead of completing the whole itinerary by boat, we decided to leave the boat in Amsterdam and move around by train hoping to find hosts in the two Belgian cities we will visit. Afterwards, instead of sailing through Zeeland, we will sadly have to get back, but this way we managed to get some extra time to visit the Randstad. This is a large polycentric conurbation in the Netherlands that consists of seventeen towns connected by a mixed network of fully integrated road, rail, and river routes. We will also have extra time to visit Floriade thanks to the tickets sponsored by the City Council of Purmerend. The Floriade Expo 2022 is a celebration of green and sustainable technology that will take place in a park. At this living laboratory, guests will have the opportunity to learn about cutting-edge innovations in the fields of greenery, food, energy, and health, as well as solutions developed by national and international innovators that make our cities more enjoyable, more beautiful, and more environmentally friendly. 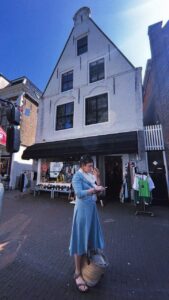 I dedicated the afternoon to following again the itinerary on the slave trade traces in Harlingen, discovered by my friend and artist Fiver Locker and beautifully presented in the book Sporen van het slavernijverleden in Fryslân (“Traces of the slavery past in Fryslân”).  I already had the pleasure of discovering these hidden clues of the dark past of the not-so-Golden Age in this Frisian city when I guided a group of students and Professors participating to the Summer School on Minority Management for Social Justice of the University of Groningen – Campus Fryslan.

Fryslân is a traditional seafaring region. Many Frisian sailors braved the world’s seas, surviving the infamous scurvy or other diseases on board and in remote locations, while others succumbed to one of the many hardships. Their journeys in all directions were profitable, especially when trade in the Baltic and North Seas was extended to other continents at the end of the 16th century. The United East India Company (VOC), founded by the States General in 1602, and the West India Company (WIC), which followed in 1621, both played important roles in this. Both private commercial companies divided the overseas trade monopoly between ‘the East’ in the Asian region and ‘the West’ in the areas surrounding the Atlantic Ocean. The Dutch Republic’s 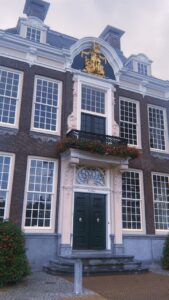 Admiralties were also involved in this overseas trade, which they secured with the power of cannonballs and grenades. The occupation of areas outside Europe as part of the Republic of the Seven United Netherlands’ Expansion Policy became associated with the slave trade and slavery. That was true both in Southeast Asia and in the Atlantic region. Harrowing histories of the transatlantic slave trade in West Africa, as well as plantation economies in Brazil and later the Caribbean, have long been known. We now know more about the Asian world’s slavery and forced labour, which Dutch administrators, planters, traders, clergy, and sailors used to relieve their own work and gain status. Slavery and colonial trade were inextricably linked from the 17th century until the 19th century. Friesland has never been an isolated region. On the contrary, the province developed into a dynamic centre of various markets, attracting many Frisians from the Baltic Seato the Wild Coast in South America, as well as those from Amsterdam, Cape Town, and Batavia, as well as Deshima, Japan. Approximately twenty-five thousand Frisian seamen and soldiers sailed and fought in the service of the VOC, the WIC, and the Admiralties during the 17th and 18th centuries. ‘Friesland had its own Amiralities department. Some interesting places to learn about Harlingen’s slave trade history include: 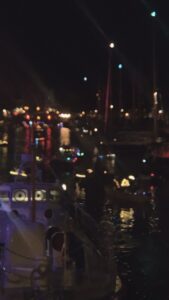 In the evening I was surprised by people setting up stages, stands, and dance floors all over the city, and filling the inner-city canals with lights. I did not know I was stranded in Harlingen on the very day the city commemorates one of its most famous festival. Harlingen is not called de voorstad van Londen (“the suburb of London”) for nothing. The city has a bustling harbour, lovely canals, historic buildings, and several nostalgic bridges. Sailing gives you a completely different perspective on Harlingen than walking along the canals. Harlingen Ongeschut was unquestionably one of the highlights of the city folklore since 2012. More than 350 boats of various shapes and sizes responded to the invitation to take part in the new Harlinger event. It was a grand, pleasant, and festive cruise through Harlingen’s canals. A request has been made to all residents and ship owners along the route to install/hang a light point outside along the quay and/or in the trees, as well as to decorate the ships. This year, especially for this festival, the SAS, the gateway to the Wadden Sea, closes the inner locks, allowing you to enjoy a fantastic and one-of-a-kind round of Harlingen. ‘Harlingen Ongeschut’ is also accessible by foot or bicycle. Various musical and theatrical acts surprised me during the cruise, and I experienced the fairytale atmosphere on the water.

hoping for the best

I went back to Tetide full of energy after this day full of excitement. Still hoping that the Instagram outreach I made during the day to find someone willing to accompany me from Harlingen to Stavoren, or at least to Makkum, would have a positive outcome. Moving the boat a bit south would ensure that Allegra does not have to start her trip with long navigation and would give us more ease in reaching Amsterdam in time for our meetings.