Luckily, Tetide gave some technical problems in the Dutch capital, which is always a pleasure to visit for a few more days. The day was divided into mechanical attempts at repair by Gloria, who thanks to her technical skills knows where to put her hands, and museums and neighborhoods outside the center for Allegra.

The first daily destination was Our Lord in the Attic Museum, a rare and well-preserved 17th-century canal house. Narrow corridors and stairs lead to historically decorated living quarters, kitchens, and bedsteads, culminating in the museum’s literal highlight: a complete church in the attic. Jan Hartman, a wealthy Catholic merchant, commissioned the attic church, which was dedicated in 1663.
A Protestant city government is in power while Hartman and his family live in the canal house. It is illegal to practice the Catholic faith in public. Former Catholic churches and monasteries have been confiscated and converted to Protestant worship. Catholics must seek alternatives and celebrate Mass in hidden house churches from now on. The city government tolerates this because the principle of freedom of conscience applies in the Republic of the Netherlands! Everyone is free to think and believe whatever they want behind the front door. This created an unusually tolerant environment in which different religious groups could coexist and work together in the city. The attic church has a seating capacity of 150 people. Worshippers enter the church through a small alley door called Heintje Hoekssteeg. They then ascend the stairs to the church in the attic. The Baroque altar is the crowning achievement of the attic church. It is flanked by two marbled columns adorned with putti holding lilies. The wooden carvings from the eighteenth century are actually candleholders. The pedestal of the left altar column serves a dual purpose: it folds out to reveal a mahogany pulpit, saving space.
Visiting Our Lord in the Attic Museum was an interesting experience not only to immerse us into an ancient reality, but also to understand the practical consequences of religious schism in The Netherlands. 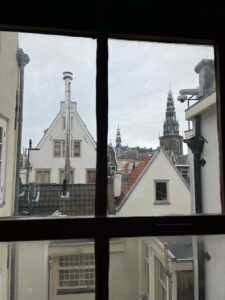 The second stop was Albert Cuyp market, Amsterdam’s most famous and busiest market. It is located in the heart of the De Pijp district. Everything is for sale! Cuyp’s open-air market has retained its original atmosphere and is a great place to sample specialties of Dutch cuisine, such as raw herring sandwiches or fries covered in tasty dips, and to receive a glimpse of the 170 peoples living in Amsterdam thanks to the exotic and rare products for sale. Opened in 1905, the Cuyp market is open Monday through Saturday. The stalls, which line one after the other on both sides of Albert Cuyp street, have the cheapest prices in Amsterdam. The walk continued in the neighborhood of De Pijp. One of Amsterdam’s most vibrant and cosmopolitan areas, located right in the southern part of the Dutch capital. Born as a working-class neighborhood to alleviate the overpopulation of the Joordan district, De Pijp is now a melting pot of different cultures and nationalities. 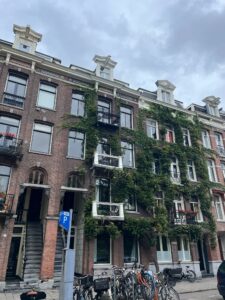 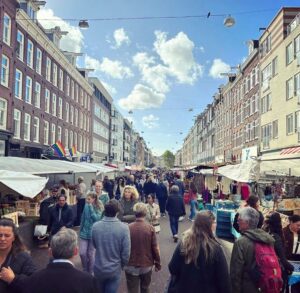 After eating a sandwich in park in the district, Allegra went to another park: Vondelpark, which with its 45 hectares is Amsterdam’s main green lung. In 1864, some distinguished citizens, fascinated by the idea of having a park in which they could recreate or ride horses, decided to entrust the project to architect L. D. Zocher. Originally the park was located in a rather marginal area of the city, but today it is located in the center of town. In this immense green space there are more than 130 varieties of trees and plants but also carpets of English lawns, flowers, ponds with ducks and swans, bicycle paths, a music kiosk and a white pavilion that make Vondelpark one of the most charming and splendid places in all of Amsterdam. Allegra randomly bumped into a work by Pablo Picasso, the sculpture “Figure découpée l’Oiseau” in the shape of a bird found near the small lake. The Catalan artist decided to donate it to the city of Amsterdam in 1965 on the occasion of the park’s centenary. 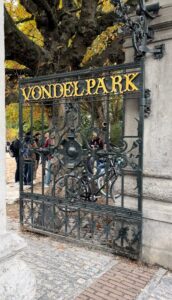 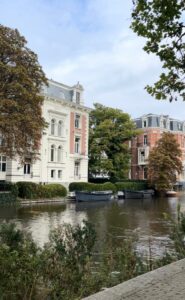 The last district to visit was Oud West, a triangular area located west of centrum and surrounded by greenery. For sure, the most vibrant neighborhood: the main streets were full of special caffe, pubs and shops. Each of them was characterized by a unique identity. In addition to that, on the sidewalk there were many stalls offering painting activities for children, appetizers with oysters and champagne, handmade hats and live music. It was really magic because the perception was to pass by a very innovative and proactive district populated by Amsterdam inhabitants.
Amsterdam is magic and makes us fall in love with it ! 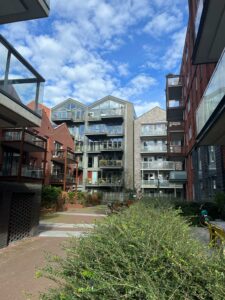 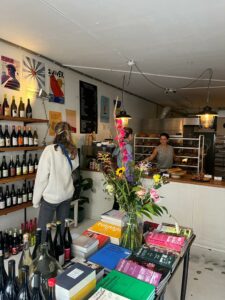