For two European Youth Parliament members like Gloria and Allegra, Brussels means firstly the home of Europe. So, our adventure begins at the House of European History, the foremost museum dedicated to the transnational phenomena that have shaped our continent. It connects and compares shared experiences and their various interpretations by interpreting history from a European perspective. The House of European History is a place for learning, reflection, and debate for people of all ages and backgrounds. Its primary goal is to improve understanding of European history in all of its complexities, to promote the exchange of ideas, and to challenge assumptions. The House presents Europe’s history in a way that highlights the diversity of perspectives and interpretations. It keeps both shared and divided memories. It exhibits and collects information about the history and foundations of European integration. The House of European History is an academically independent project of the European Parliament and part of its visitor offer. Its international collection, exhibitions, and programs provide unexpected and inspiring encounters. The idea is to strengthen the European dimension in debating, exhibiting, and learning about history through outreach and partnerships. The House’s multifaceted interpretation of the past, as a place for encounters and exchange, builds bridges to questions relevant to today’s Europe. 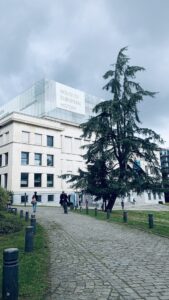 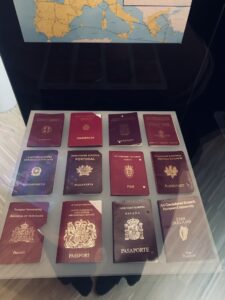 The permanent collection is organized in the following sections: 1) shaping Europe, 2) Europe a global power, 3) Europe in ruins, 4) Rebuilding a divided continent, 5) Shattering certainties, 6) Europe now. We traveled from one section to another listening to audios, watching videos, reading original documents and much more. It was very interesting to find out how much common ground there is among European countries, as well as to learn more about the recent history of European nations farther away from Italy and about which we knew less. 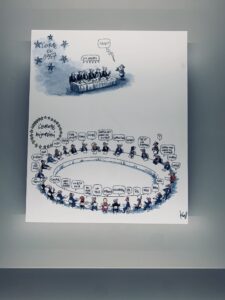 With great enthusiasm we left the museum and headed for the European Parliament. Right in the square dedicated to Altiero Spinelli we happened to meet a close friend of Gloria’s: Filippo, also an active member of EYP. Together we went to the headquarters of the European Youth Forum where we met Francesco, a friend and colleague. Together we conversed about our project and their initiatives related to the theme of climate change and cultural heritage. The meeting was really prolific because we got the interesting view of this NGO, which is the platform organisation advocating for youth rights in Europe. It is made up of over 100 National Youth Councils and international youth NGOs from across Europe.  The European Youth Forum works to empower young people to participate actively in society and improve their lives by representing their interests towards the European Institutions, the Council of Europe, the United Nations and other partners active in the youth field. 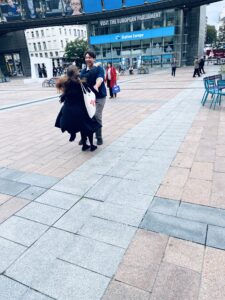 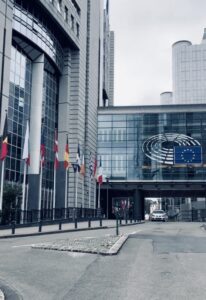 Later, we left Francis at his work and headed with Filippo to the city center to admire the famous Grand Place. The square has been influenced by architecture from the Baroque, Gothic, and Louis XIV eras, giving it an eclectic feel. Because of its eclectic character, UNESCO designated the Grand Place as a World Heritage Site in 1998. Historically, the Brussels Grand Place was a marketplace where traders and citizens exchanged goods. The streets that surround the square are named after foods. As in the case of butter (Rue au Beurre), herbs (Rue du Marché aux Herbes), cheese (Rue du Marché aux Fromages), and so on. Market stands gave way to the grand buildings that surround the Grand Place today as the city grew. The Maison du Roi in French means “King’s House,” but the Broodhuis in Dutch means “Bread House.” After France bombarded Brussels in 1695, most of the buildings were rebuilt or restored. 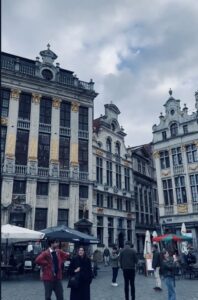 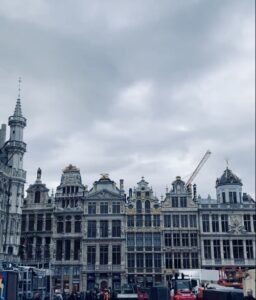 The most popular Belgian boy

Then, we walked around the city center and came across the Manneken Pis. It is a figurine of about 50 centimeters, depicting a naked child, urinating from the top of a fountain. Manneken Pis was carved in stone in 1388. Since its placement in the 14th century, they tried to steal the statuette on several occasions, until an ex-convict managed to steal it. Thus it was that a bronze copy of the original stone statue, made in 1619 by Jérôme Duquesnoy, a famous Belgian artist of the time, was placed on the fountain. Subsequently, attempts were made several times to steal this copy, and today, it is not known for sure whether the statuette is really the one that Jérôme Duquesnoy made or whether it is another copy. In 1698 a governor gave Manneken Pis his first dress, a tunic. This was the first of 650 suits given to him by government presidents visiting Brussels. In the Museé de la Ville, located in Maison du Roi, you can see the young hero’s clothes, small regional outfits or costumes, such as that of the bullfighter and Elvis. At various times of the year, the Brussels City Council dresses the Manneken Pis in original clothes. We saw the Manneken Pis wearing an officer’s outfit! 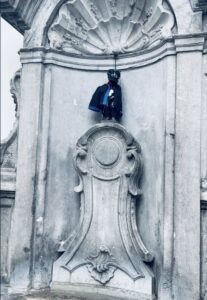 To conclude our day, we decided to have dinner together before Filippo went back to Maastricht where he lives. We took advantage of this time together to exchange some more ideas about our project and some thoughts about the city of Brussels!