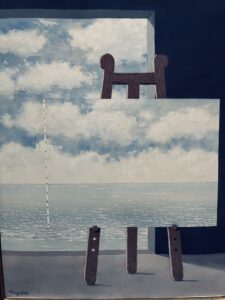 This morning we woke up poetic and thirsty for art, so we decided to devote our morning to visiting one of the city’s most important collections, Musées Royaux des Beaux-Arts de Belgique. We started visiting the Magritte Museum, which not only holds the largest collection of works by the famous Belgian Surrealist but also the most important collection of works from Magritte’s “vache” period. In addition to numerous world-famous paintings in typical Magritte style, we also discovered works from his less well-known periods. For instance, we expanded our knowledge about the advertising collaborations the artist has made throughout his career to support himself. One of Magritte’s masterpieces that surprised us the most was the “Empire of Light”. A nighttime street scene is set against a pastel-blue, light-drenched sky dotted with fluffy cumulus clouds. René Magritte upends a fundamental organizing premise of life with no fantastic element other than the single paradoxical combination of day and night. Sunlight, which is normally associated with clarity, causes the confusion and unease that is traditionally associated with darkness. The brightness of the sky becomes unsettling, making the empty darkness below appear even more impenetrable than it would in a normal situation. The strange subject is treated in an impersonal, precise style that is typical of veristic Surrealist painting and that Magritte has preferred since the mid-1920s. 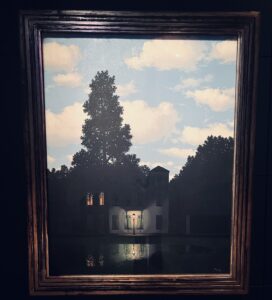 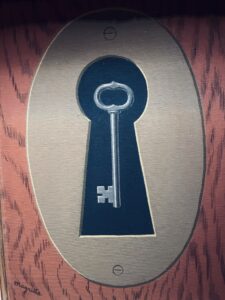 A journey into the last century

Once we concluded Magritte collection, we dove into the astonishing Musée Fin-de-Siècle. The Fin-de-Siècle Museum is dedicated to the 1900s, when Brussels, Europe’s capital, was a unique artistic crossroads and Art Nouveau’s capital. Paintings, drawings, watercolours, prints, sculptures, photographs, films, models, and decorative objets d’art can be found in this cultural history sanctuary. Ensor, Khnopff, Spilliaert, Horta, Rodin, Gauguin, Mucha, Bonnard,…: more than 30 major artists are honored at the Fin-de-Siècle Museum! Plunged into the heart of the effervescent atmosphere of Brussels 1900, we discovered a range of artistic currents, from impressionism to Art Nouveau, and different disciplines, from fine arts to opera. 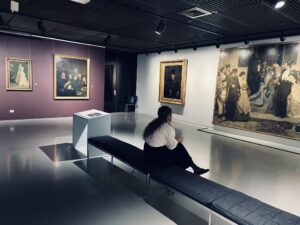 We were impressed by a wonderful oil painting by Post-Impressionist painter Pierre Bonnard. The title is “Nude Against the Light”, also known as “Backlit Nude” (in French: “Nu à contre-jour”). Marthe de Mrigny, the artist’s naked model and partner, is shown in the work applying eau de Cologne after a bath in a tub. She is silhouetted against the window light, which fills the room with bright warm shadowless light and color. The bather is reflected in a mirror, which is a recurring motif in Bonnard’s work. Another amazing painting that dazzled us is “Dimanche après-midi” by Gustave Van de Woestyne. Gustave organized his life and art around deep philosophical reflections. Even at a young age he was very concerned with existential questions, which were quickly amplified by religion. The artist made several attempts to lead a clerical life, but he was too driven by creative desire to devote his existence exclusively to the church. Instead, he understood the pictorial palette as a tool to spread the word of God by deploying subtle earthy colors to represent Catholic values such as simplicity and humility, love of God, respect for all creatures, human suffering, and hope. The artist embodied this spiritual dedication with an open stance on the world. His eclectic body of work is informed by his receptivity to developments in Modernism. 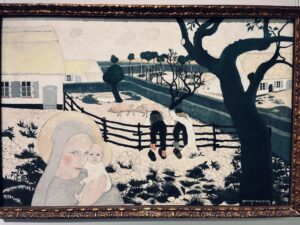 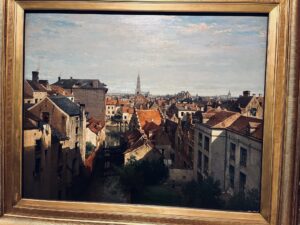 Institutional meeting at the Grand Place

After this long morning among masterpieces, we had lunch with Gloria’s friend in a nice park in the middle of the city. Then we walked around till a terrace over the city: we enjoyed the beautiful landscape.
It was almost four o’clock and it was time to head for the town hall at the Grand Place. What a thrill to enter these wonderful buildings and meet Ans Persoons, alderwoman of town planning, public spaces and dutch-language education and affairs. 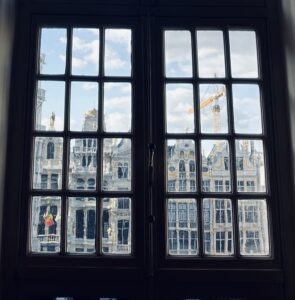 We talked about many topics, in particular management of mass tourism. Ans explained to us that in the old town many old stores have moved away and made way for souvenir stores or small bazaars. This, in addition to creating problems with the identity of the central areas, is a reason for the emptying of the downtown dwellings. In fact, in order to access the upper floors of the buildings, it is necessary to go through the stores. But currently few people who work in the stores live above their stores. So, the municipality is trying to create secondary entrances where possible, so as to make the downtown apartments more desirable. Another issue is related with Airb&b and the rising rental costs. In addition to that, Ans explained to us the municipal difficulties to combine several different interests, such as accessibility for disable people, cycle paths, monumental conservation and sustainable restorations.
For example, Ans told us that the “Royel des Monuments Commission” carried out a study of the famous Place de la Liberte and lobbied the municipality to uproot the trees currently in the square because they do not belong to the original neoclassical design. Clearly the idea of removing trees from a city is absurd considering the efforts being made to plant new ones! 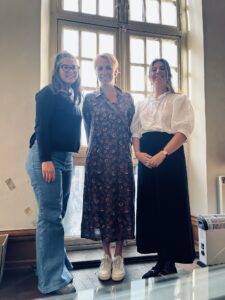 Honored to have been able to attend this meeting, we said goodbye to Ans and headed home, where we had a chance to chat some more with Anna and her husbands, the kind Italian couple who welcomed us into their apartment.