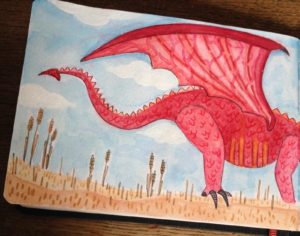 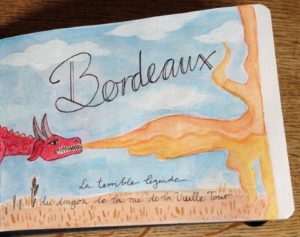 as told to me by a local:

Once there was a dragon who would bring illness to the people and let the fields full of crops burn, so that the citizens would have nothing to eat anymore. He lived up high in a tower in Bordeaux and would only stop terrorizing the locals if he would get young virgins as a sacrifice every Sunday. So the city would offer him poor girls from the streets to keep him satisfied. 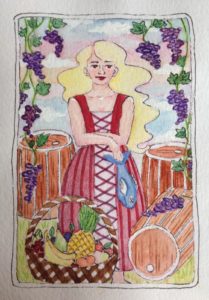 But one day a girl from a richer family offered to go. She took a lot of wine and fresh food with her. Because she had a plan to talk to the dragon and hopefully find out his weakness to free the city from this terror.  Luckily when she went in to the tower the dragon did not eat her immediately. The girl was intelligent and had a lot of wit, the dragon enjoyed talking to her.  And he also enjoyed the food and especially lots of the wine. As the night went on the dragon told her his secret: only the holy staff of a saint could kill him. The girl quick wrote this down and threw little pieces of paper out of the 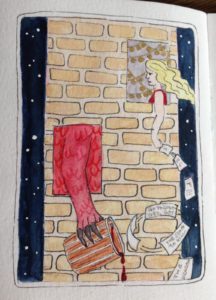 window when the dragon wasn’t looking. Of course the people found the clues and searched everywhere for the staff but the weapon was nowhere to be found in Bordeaux. Actually a town near Bordeaux called Limoges had the staff but when the people of Bordeaux asked for it, they wouldn’t give it to them. They were afraid that they would never get it back. But the Bordeaux people begged and even agreed to send sons of the rich families as hostage to Limoges as insurance.

The staff was traded and when the bishop hurried to the tower and touched the wall, the frightened dragon burst out in a stunning noise and jumped into the Garonne where he went up in flames and smoke. Nicolette was saved and all the people of Bordeaux gave her a wonderful celebration. She was proposed to by a rich and beautiful lord of the region. But the staff was never given back, because they just washed and dressed up some poor men of the streets that they did’t want them back.

I loved the story and the way the french lady told it to me but of course i had to research a bit more. So here are some additional info about the legend: 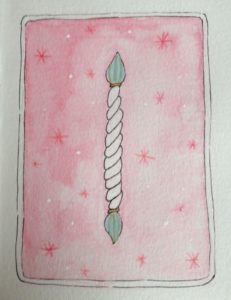 The name of the girl allegedly was Nicolette. She was very pretty, very intelligent and a ploughman’s daughter. The dragon told her he could only be forced to leave the tower by presenting him with the miraculous stick of Saint Martial, a pastoral staff endowed with miraculous powers, which Pope Saint Peter had given to Martial a long time ago before sending him to convert Aquitaine to Christianity. The staff had been in the Limoges Cathedral for years. Twelve jurats from Bordeaux were sent to Limoges to negotiate the loan of the famous staff, six were held hostage to guarantee the loan and the staff of Saint Martial finally 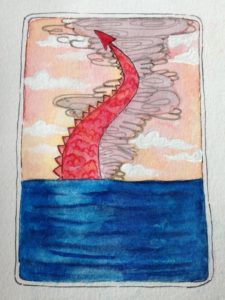 arrived in Bordeaux. The sad end of the story tells us that the people of Bordeaux, having learned of the other magical powers of the St Martial’s staff, in particular its ability to bring rain, decided to keep it in the Basilica of St Seurin. As for the hostages, in other sources i read that they were not jurats but in fact poor heirs paid for this mission. Because of the Bordeaux refusal to return the staff of St Martial, they were buried up to their necks and massacred in a square in Limoges.

The legend about a dragon in Bordeaux originates from a time, in that the city of Bordeaux belonged to the English.  In the famous tower there was a cannon, used to announce the curfew or to sound the alarm in time of war. At the top of the tower, floated the english standard decorated with leopards that the Bordeaux people called “dragons”. Extraordinary things were reported very quickly about the tower and the children who were shouting were threatened to be handed over to the dragon. Even though in the legend the dragon dies, scary stories of a dragon in the tower continued to be told to the children so that they would remain well-behaved.

The dragon’s tower allegedly still stands today, but now it’s part of Hôtel Tour Intendance so you can’t visit it anymore, a tour guide told me.