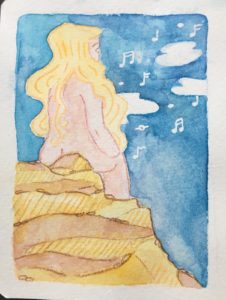 Many hundreds of years ago a noble knight, Count Siegfried, lived at Körich Castle. Once he lost his way while hunting, and toward evening he found himself in a narrow, deep, and wildly overgrown valley. This was the Valley of the Alzette at the place where today the suburbs of Luxembourg City picturesquely blend with the cliffs. Rising before him, the count could see sheer rock cliffs, upon which stood the ruins of an ancient Roman castle. Suddenly the sounds of wonderful singing fell upon the startled knight’s ears. After listening for a time, the count hurried in the direction that the sounds were coming from, and soon he discovered a maiden sitting among the castle’s ruins. Captivated by her beauty, he stood still. It was Melusina, the Nixie of the Alzette. With a fixed gaze Siegfried stared at the otherworldly vision. Seeing the handsome knight, the maiden covered her face with her green veil, then disappeared with the last rays of the evening sun. Overcome with fatigue, Count Siegfried lay down beneath a tree and fell asleep. The next morning the song of a bird awoke him from a blissful dream. He got up and followed the river. He soon found himself in the familiar vicinity of Weimerskirch, and from there he returned straight away to his homeland. 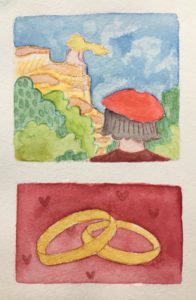 The vision of the beautiful maiden and her wonderful singing had mightily captivated the count’s soul. He often returned to the place, now very dear to him, in order to see her and hear her again. Once he met her in the valley, for she took pleasure in the count’s visits, and she had fallen in love with the handsome knight. He rushed toward her, declared his love for her, and asked her to become his wife. She consented under the condition that she not be required to leave the cliffs, and that he would never ask to see her on Saturdays, when she wished to be alone. Under oath the count promised this to her. 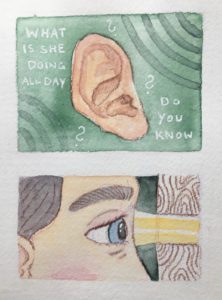 Siegfried entered into an agreement with the Abbot of St. Maximin near Trier to trade the former’s fruitful commune of Feulen near Ettelbruck for the latter’s infertile rocky cliffs and their surrounding woodlands. Because it would have taken years of time and great expense to build a castle on the rocky cliffs, where he could take Melusina home as his wife, Siegfried gladly accepted the help of Satan, who offered to build the castle for him and make him exceedingly wealthy if the count would surrender himself after thirty years. At the top of the cliffs a magnificent castle appeared overnight, proudly looking down on the valley below.

Siegfried married the beautiful Melusina and lived happily with her. Melusina presented him with seven children. However, every Saturday the nixie remained hidden from all eyes, retiring to her room and locking the door. This proceeded for many long years without her husband asking her what she was doing on those days. However, his friends, who with time learned about the situation, planted seeds of distrust in the count against his good wife. Now, at 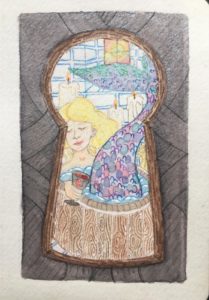 any price, Siegfried wanted to know why Melusina withdrew from him every Saturday. The next Saturday he secretly approached her room. From inside he could hear the sound of rushing and splashing water. Looking into the room through the keyhole he saw his wife in her bathtub combing her long blond hair with a golden comb. Her beautiful limbs ended with a horrible fishtail, with which she was splashing waves. The count uttered a cry of horror, and in the same moment Melusina sank into the depths of the cliffs. Siegfried had lost her forever.

That is the lengthy and detailed version of the legend about the woman who is said to have been the wife of the founder of Luxembourg, Count Siegfried.  Every child in Luxembourg knows the story of the mermaid, its even told at school. In a survey Luxembourger were ask who they thought are important figures from Luxembourg. On fourth place many people mentioned Melusina. Even tough every adult knows that mermaids aren’t real, some of them still think Melusina is a real historical figure.

There are also tales surrounding the whereabouts of the mythical mermaid: Once every seven years, Melusina returns, either as a serpent with a golden key in its mouth or as a beautiful woman. All it will take to win her freedom is for some brave soul to kiss the womanly vision or take the key from the serpent’s mouth. Other stories speak about  Melusina appearing every seven years in human form above the cliffs, asking people to redeem her. If this does not happen, the white figure soars over the city crying, “Not for another seven years!” then sinks back into the cliffs. 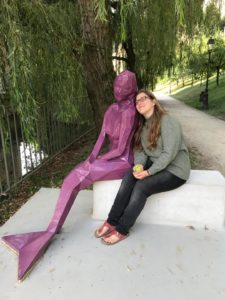 Those stories are the reason why, when Luxembourg was still a fortress, sentry duty, especially at night, was not very popular. One time a courageous soldier who had traded shifts with a comrade was standing guard on the cliff-top. Melusina appeared to him in the form of a beautiful maiden and asked him to redeem her. She told him that it would be a difficult, but not impossible, task. However, he should not attempt it if he thought that he might not succeed, because if he failed she would sink three times deeper into the earth. While she was thus speaking there arose a mighty rumbling sound around the cliffs, causing the soldier to fear that they were about to collapse.

The soldier promised to fulfill Melusina’s wish. She said that for the nine following days, every night at exactly twelve o’clock, neither one minute earlier nor one minute later, he would have to appear behind the altar of the Dominican Church. On the tenth evening she would appear to him in the form of a fiery serpent with a key in her mouth. With his mouth he would have to take the key from her mouth and then throw it into the Alzette River, which would redeem her. For eight nights the soldier stood behind the appointed altar at precisely twelve o’clock, but on the ninth night he arrived late. Returning to his quarters he heard such howling and screeching coming from the cliffs that he thought all the wild animals were fighting one another in the air. However, no other person heard the noise.

According to another legend, Melusina is imprisoned within the rock that helped form Luxembourg City’s tremendous defenses. She passes the time by knitting, but thankfully she manages only one stitch each year, because should she finish her knitting before she’s released, all of Luxembourg and its people will vanish into the rock with her. It is also said that whenever Luxembourg City is threatened by danger or mishap, Melusina circles the cliffs while crying out mournfully.