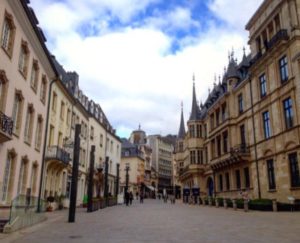 After arriving in Luxembourg late in the evening i wandered around in the Petrustal, the neighborhood of my hostel, with is World Heritage. In the morning i met up with Claudine Bechet-Metz, who works for the city at the Culture Office. We strolled through Luxembourg and talked about her work and she showed me some of her favorite places. We f.e. visited the black Madonna at the Johannes church and the Melusina statue designed in 2013.

Next i met up with Gilles Genot. I already heard the romantic version of the Melusina legend from Claudine. He gave me a tour of the Letzebuerg City Museum and we talked about the historic background of the Melsusina legend and its meaning behind it. But Gilles also showed me the Schueberfouer exposition he curated at the museum.  Sadly i was  just about too late to visit the real Schueberfouer funfair that is taking place annually in the city. The funfair was founded by John the Blind, King of Bohemia and Count of Luxembourg,  in 1340. And it will be soon part of the intangible World Heritage, Gilles told me. This would be the second intangible World Heritage after the Echternach dancing procession that is specific to Luxembourg. 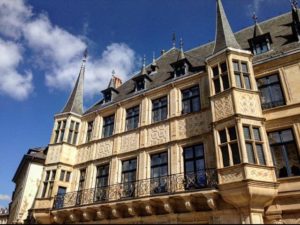 On our way to the Bock plateau, Gilles drew my attention to small Melusina details that are spread all over the old town like the sandstone panel with  a depiction of a mermaid under the balcony of the Palais Grand-Ducal. At the Brock plateau we talked more about Luxembourg’s history and Gilles showed me the spot where Melusina allegedly sat when Sigmund first laid eyes on her. You can read all about the famous legend of Luxembourg if you scroll down. After lunch i met up with Robert Philippart. In his position as a UNESCO site manager for town and fortress of Luxembourg we talked a lot about the organisation and discussed different viewpoints people have on World Heritage. Before sundown i visited the Kasematten, a network of caverns underneath the city which are part of the fortress. 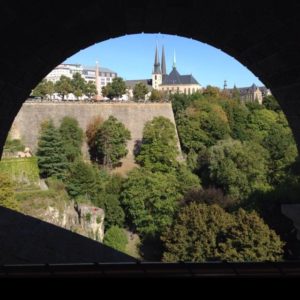 I also tried out the Unesco bike tour and was pleasantly surprised. On my bike tour i really enjoyed spectacular view from the special bike bridge that is located directly underneath the Grand Duke Adolf bridge. It was the perfect way to discover Luxembourg as a whole and not only the city center. Where Brussels is a constant mix, Luxembourg is like all typical city types combined in to one. But because of its special topography it does not not feel thrown together and overwhelming. All quarters are bit segregated by the hills and plateaus Luxembourg is built on. The charming old town, the modern business quarter, the quite suburbs, the beautiful green Petrustal.  All could be their own complete town, but together they form a perfect city.

During the day i met up for lunch with Shaaf Milani-Nia, a city architect. We talked about future projects, like f.e. a third city elevator and the  reinstatement of the riverbed, and about how she is working together with the locals and what their opinions are about World Heritage.

I stayed in Luxembourg during mobility week. All week i could use the buses for free. From next year on an, all regional transit in Luxembourg will be free. So i think i have to come back and discover the rest of the Dukedom. 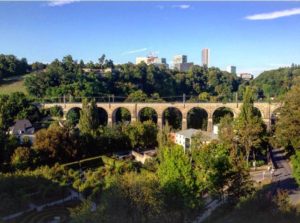