Picturesque canal network, rich history and thrumming cultural scene. Here we are in  the capital of the Netherlands: Amsterdam.

But before diving into the city, we had some technical duties to perform. Indeed, it is the perfect moment to replace the broken part of Tetide’s engine. A gentle man volunteering at the harbour helped us finding a mechanic expert. So, Gloria removed the part and then we went into this repair shop. They need to order a new gear; that’s why they asked for few days to fix everything. 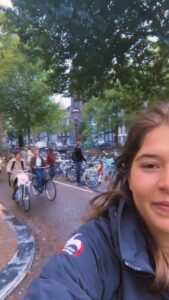 At the Monuments City Department

After taking care of our boat, we could deservedly enjoy the city. We ate our sandwiches with a gorgeous view on the canals, and then we reached the historic De Basel building where we have an appointment with the Monuments & Archaeology Department City of Amsterdam.

Beside the municipality activities, the building mainly acts as the Amsterdam City Archives, the world’s biggest city archive and, according to many, the most attractive. It features a library, vast audio, video, and photo archives, as well as a historical topographical collection with millions of maps, drawings, and images. Visitors can explore Amsterdam’s past to discover more about how the modern city was created. Additionally, the Archives host both transient and ongoing exhibitions and provide guided tours. 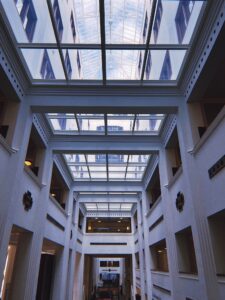 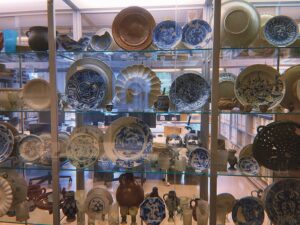 It was a magnificent place for a meeting. We have been welcomed by Inez Weyermans, project leader at Municipality of Amsterdam, Bureau Monuments & Archaeology. She mainly works for the Unesco heritage of the city: the canal belt.

The end of the 16th and the beginning of the 17th centuries saw the construction of the historic urban ensemble known as the canal district of Amsterdam. It consists of a system of canals to the west and south of the ancient old town, the medieval harbor that encircled the old town, and the Singelgracht, which was moved interior along with the city’s defensive borders. It was a long-term project that required draining the swampland, building a network of canals in circular arcs, and filling in the empty places in between. These areas allowed for the growth of a uniform urban ensemble that included gabled homes and a number of monuments. The biggest and most uniform urban extension at the time. Up until the 19th century, it was used as a model for extensive town planning and was a source of inspiration for people all over the world. 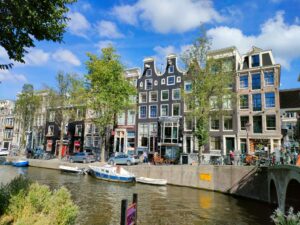 Inez explained that the canal belt raises several issues which have to be handled by the Municipality.

Firstly, she illustrated us the city’s attempt to involve the local community in their cultural heritage. Indeed, Inez underlined the need to increase the historical acknowledgment by the citizens and, especially, by the new generations. In order to reach this goal the Monuments & Archaeology Department together with Amsterdam Museums had developed an educational programme for all the Amsterdam’s schools. It provides for three lessons for 12 years old students: the first one is held at the De Basel building by a specialized teacher; in the second one children go around the canals by boat; the third one is a focus on the Holland colonization. This issue, indeed, has become increasingly important by virtue of the fact that the Golden Age obscures the nation’s colonial origins and is in some ways the story of the winners. In addition to hiding slavery, it also obscures overall poverty. Not everyone participated in the Golden Age, not at all. Promote wider inclusion of what you consider to be “Dutch” if you wish to safeguard a free and democratic system. People assume they are familiar with the Golden Age’s narrative if you mention it. What the traditional historiography fails to mention is that barely 1% of society was affected. People in Holland were suffering from poverty, there were ongoing internal battles, and slavery was also present. The current population of the Netherlands includes offspring from both the 99 percent and the 1 percent. That’s the reason why the UNESCO department wanted to include this lecture within the educational programme. 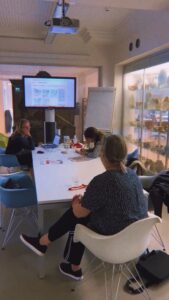 Secondly, she told us all the difficulties in tackling the climate impact on the country. She explained that there is a programme office dealing with this topic and working in a cross sections way. For instance, they collaborate with the Monuments Department and with technicians to do maintenance of canals, bridges and banks. Drought and rising seas play a dramatic role in making matters worse. In particular,the municipality of Amsterdam seeks to take preventive action and has a heart fort the issue since the canal system has been a national heritage site since 1999.

At the De basel building we had the chance to meet also Annette ten Doeschate, the sustainable heritage coordinator of  the Spatial Quality Committee of Amsterdam Municipality. Among her activities, she works at the digital desk giving directions on heritage policies and simplifying the legal and technical frame for the citizens. The idea is to make more feasible private initiatives for the renovation of buildings, especially when citizens want to decrease environmental impact. Indeed, their wills often collide with public bans and complicated regulations. That situation mirrors the conflict between old heritage legislation and new guidelines for climate change. Thanks to her position, Annette can better understand what should be modified in the legal frame and what technical innovations the city needs. Indeed, she also communicates with the police making departement to make it aware. 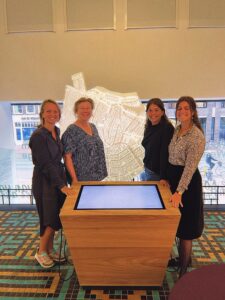 Moreover, her team had developed many instruments to facilitate pro-clima actions. For example, they mapped and classified all city’s buildings according to their possibility to install solar panels, according to their economical and cultural value, and according to many other criteries. Mapping makes administration more accessible!

Finally, we discuss with Inez and Annette the current impact of climate change on the city of Amsterdam. They told us that no physical signs are already noticeable. However, the Municipality wants to prevent problems with a good water management, investigations on future risks, and protection of the buildings most at risk. 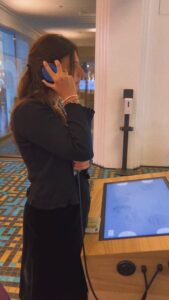 This meeting has been incredibly interesting! So, we deserved some spare time at Caffe Hoppe. The Hoppe is one of Amsterdam’s best-known brown cafes. Located in the lively Joordaan district, this bar, which opened in 1670, offers a wide selection of local beers as well as traditional Dutch gin.

Café Hoppe has been located on the Spui since 1670. Hans van Mierlo laid the foundations of the liberal D’66 party here,and even our recently abdicated Queen Beatrix honored the café with a royal visit when she was still a young princess.

Here we spent amazing time with our new friends we met some days before in Harlingen. 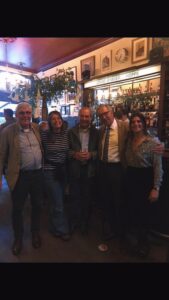