New day, new city. Today we left by train with our bikes from Amsterdam Central Station towards Den Haag. Holland’s third-largest city, Den Haag is a majestic and regal location, filled with sumptuous palaces, home to embassies and luxury residences, as well as boulevards and green parks. The Hague, whose official name is ‘s-Gravenhage (‘Count’s Hedge’), is the seat of the Dutch government and the residence of the royal family. It was also the country’s capital until 1806, when Louis Bonaparte established his government in Amsterdam. Eight years later, with the expulsion of the French, the government was again moved to The Hague, but Amsterdam retained the title of capital.

During the 20th century, the city became the seat of numerous international legal bodies, including the United Nations International Court of Justice, where important trials are regularly held that propel Den Haag into the headlines. The city is also home to all foreign embassies in the Netherlands, and is inhabited by a large community of foreign residents. 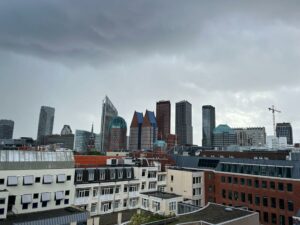 Welcome to the Europe House

Indeed, we are here because of institutional commitments. Since Gloria is an Ambassador of the European Climate Pact, we have been hosted at the Europe House, home of the Representation of the European Commission and the European Parliament Liaison in the Netherlands. Here we met the Coordinator of the House of Europe, Amber Scheele, to whom we presented Navigandum per hereditatem project and started discussing presenting our report. It would be the perfect place where to talk about our experience!

In addition to institutional activities, the House of Europe is an information point where you, as a citizen, can just walk in and see, in an interactive way, what the European Union can do for you. This is the place where you can learn about Europe. You can also stop by this meeting place and take away leaflets on all kinds of topics related to the European Union. There are also people ready to answer your questions. If you want to voice your own opinion, you can do that too at the House of Europe. Debates are organized, and the meeting and debate room can accommodate more than 100 visitors. Under certain conditions, civil society organizations can use this space free of charge. 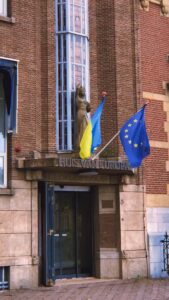 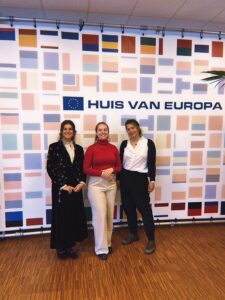 After chatting with Amber and visiting the beautiful building, we had lunch in front of the ancient Parliament, the Binnenhof. The Binnenhof is a group of buildings located near to the Hofvijver lake in the heart of the city. Along with the Ministry of General Affairs and the office of the Dutch Prime Minister, it serves as a meeting venue for both chambers of the Netherlands’ States General. The Gothic fortress, which was mostly constructed in the 13th century, served as the counts of Holland’s primary residence before it was transformed into the political hub of the Dutch Republic in 1584. The top 100 Dutch heritage sites include it. The Binnenhof is one of the oldest still-in-use Parliament buildings in the world. 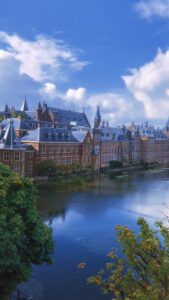 A full immersion into Dutch Art

But it started raining little later, so we decided to enjoy the city visiting the famous Mauritshuis Museum, which is particularly known for its collection of paintings, which includes masterpieces by artists of the Dutch Golden Age-including Joannes Vermeer, Rembrandt van Rijn, Carel Fabritius, Jan Steen, and Paulus Potter-as well as other Dutch and European painters such as Hans Holbein the Younger, Jan Brueghel the Elder, Peter Paul Rubens, and Anthony van Dick. The museum houses also the most well-known of Vermeer’s works, Girl with a Pearl Earring. It is a “tronie,” a painting of an imagined figure, rather than a portrait. Tronies often feature a specific kind or character, in this example a female dressed exotically with an oriental turban and a surrealistically big pearl dangling from her ear. Light was Johannes Vermeer’s specialty. The girl’s gentle features and the glimmers of light on her moist lips in this photograph demonstrate this. Of course there is also the brilliant pearl. 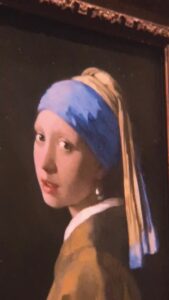 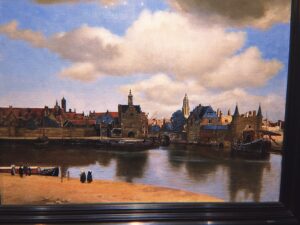 Visiting Mauritshuis, we also had a chance to look at Rembrandt’s amazing works. The Dutch Golden Age painter changed his style and techniques throughout his life. Among his first masterpieces, there is for sure The Anatomy Lesson of Dr Nicolaes Tulp (1632). When Rembrandt was commissioned to create the portraits of the Amsterdam surgeons, he was only 25 years old. The doctors are shown in action by Rembrandt, and each of them is focused on a different object. The stark contrasts between light and dark give the scene more dynamism. The teenage artist showcased his renowned technique and his exceptional aptitude for painting lifelike portraits in this group portrait.

Instead, if we look at the end of his life, we find a new expressive freedom. For instance, in Self Portrait (1669) it’s amazing how he painted the face with such forceful brushstrokes. Rembrandt suggests a real-life guy with his thick, almost model-like layers of paint. This is truly a work of art.

This collection of Dutch art permitted us to discover much more about the Holland style and cultural background. So, we concluded our day in Den Haag artistically fulfilled. 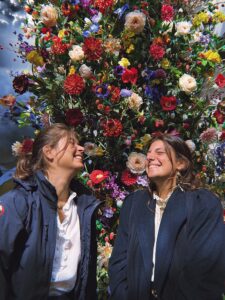