The sky is blue, autumn is beginning to color the trees, and the sun is shining high. We could not have hoped for better weather for our rural adventure among the Beemster fields. We took a train with our bikes in order to ride back and forth. After few minutes cycling, we got in front of the old fort, which was once part of Amsterdam’s Defense Line. It is now a UNESCO World Heritage Site and has been transformed into an eco-chic resort called Fort Resort Beemster. The former military building is now an oasis of hospitality and serenity, blending heritage with contemporary design. 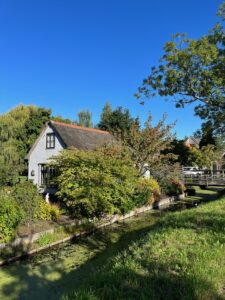 The history of Beemster

We followed our cycle journey towards the information center where we found Jos Dings, former alderman at Beemster municipality. He kindly explained to us Beemster history and illustrated the changes in ancient maps. The Beemster polder represents unique landscapes, demonstrating the great skill of the Dutch in water management over the centuries. In the period before reclamation, water had broken many lives by destroying the dikes. Then a group of wealthy lords from the East India Company presented the plan to reclaim these territories. Historically a lake, the Beemster polder was first drained in 1609. The dam, however, did not withstand a storm surge. So land reclamation had to be resumed from the beginning. It was not completed until 1612, thanks to the use of 43 mills. Later water from the inner Schermeer Lake was also pumped and extracted. They employed 53 mills, resulting in the Schermer polder. Countryside at 3.5 m below sea level was transformed, cultivated and populated in the following centuries.The land, obtained by reclamation, was leased to farmers and cattle breeders. Wealthy merchants built imposing houses and country residences there. The project was architected in a geometric scheme. For a long time it was the windmills that had to ensure that the inhabitants did not run into danger and that the water levels were suitable for the cultivation of the land. 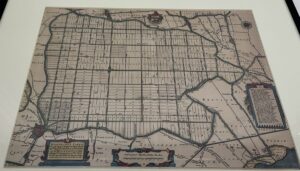 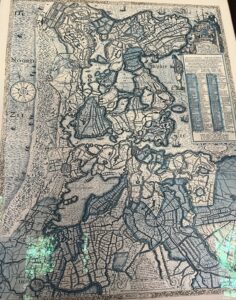 In the late 19th century the windmills were replaced by steam-powered pumping stations, and later still by diesel and electric pumps. Today the Beemster is divided into more than fifty sections, each with its own water level control. Farmers need a low water level under their land, while villagers want a high level to keep the piles under their houses from rotting. The ideal water level for livestock farmers is in the middle, while environmentalists have made their own demands. In the past, water was pumped out only to prevent flooding, but today, in times of drought, water is also pumped into the Beemster. This is possible because the IJsselmeer, the former Zuiderzee, now contains fresh quality water suitable for agriculture.
In 1999, the Beemster polder was listed as a UNESCO World Heritage Site. Currently, the Beemster does not consist solely of agricultural land. It includes pastures for dairy production, greenhouses for horticulture, orchards and 200 hectares reserved for tulip cultivation. Viewed from above, one notices the geometric pattern of pure squares of land, cut by canals. 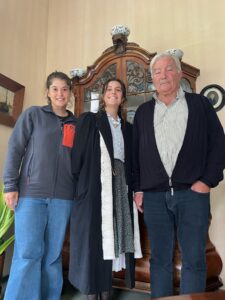 Not far from the information center was Beemster Church, where we found kind ladies who escorted us to the top of the steeple. From up there we admired a breathtaking view of such an unusually geometric passage. Once back down, we admired a hidden room in the church decorated with classic Dutch pottery with blue and white figures. The room contained the ancient footstools under which a small fire was placed to warm the bodies of the worshippers during winter prayers.
By now it was lunchtime and we gave in to the temptation to try the very famous beemster cheese. Beemster cheese is a hard cow’s milk cheese. Beemster is made in the same way as other hard cheeses such as Gouda. Beemster’s distinct flavor is due to the ingredients (milk from grass grown on sea-clay in a polder 4 meters below sea level), the fact that part of the production process (curd stirring) is done by hand, and the cheeses are ripened in changing conditions.

Refreshed and rested, we resumed our bicycle route passing through crops, pastures, pumpkin vendors and wonderful sloping-roofed houses. The roof of these houses is typically made of thatch. A totally environmentally friendly material, thatch gives the roofs high thermal insulation power, protecting them from even the heaviest rains. Over time, moreover, straw loses its original golden color to take on an elegant gray hue. 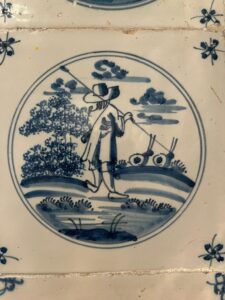 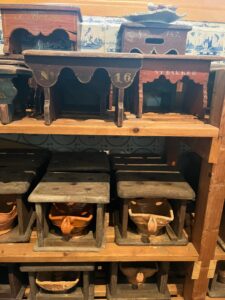 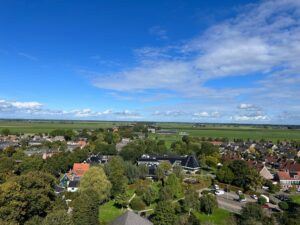 Later, we reached De Rijp, which has been called ’Holland’s most beautiful village’. Herring fishing and whaling brought prosperity in the 17th century, resulting in the construction of beautiful town halls, warehouses, houses, and churches.  Our tour among the mills and cows continued until we happened upon the old elementary school recently purchased and renovated by Wil van Blokland. She is an extraordinary artist who works primarily with ceramics. In this wonderful space she decided to create her studio and exhibition space where she welcomes artists from all over the world. Wil showed us her artwork that we were so strongly attracted to that we purchased small pieces from the porcelain potatoes collection.

Ecstatic with this day full of new historical, naturalistic, and artistic discoveries, we set off home for a warm dinner on board! 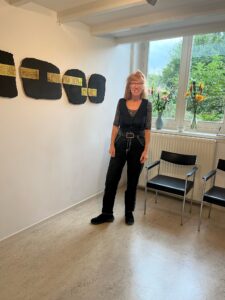 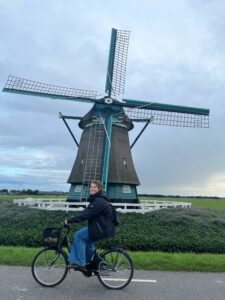