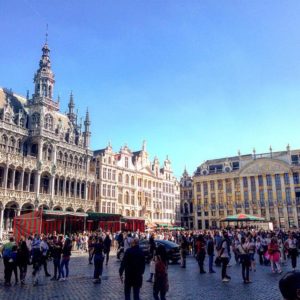 On my way to Luxembourg spontaneously stopped in Brussels for a short stop. The capital of Belgium was a bit of a shock for me.  Never have i ever traveled for so long alone and after staying in Bruges, Lille, Brest, Nantes and La Rochelle, i think i was used to small and/or quite cities.  Even the bigger cities like Budapest and Bordeaux could not compare to this city. The feeling was totally different. I stayed in a youth hostel in the turkish quarter. I visited all the big places i could fit into my small time frame: Grand Place, Royal Palace, Bourse, Art Nouveau Quarter, the Atom, the Cathedral and the Mont des Arts. 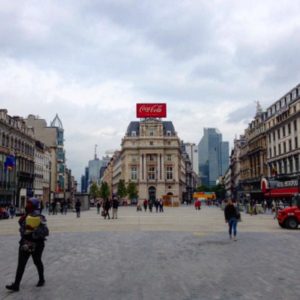 If New York is the city that never sleeps, than Brussels for me is the city that never passes up the chance to celebrate something. In the one and an half days i stayed there they had a free comic festival, a free electronic music festival, a beer fest, a stage at the Grand Place with traditional music  and many markets like a flee market and a turkish market. Tom, a local, told me himself  that Brussels can be overwhelming, weird and confusing at 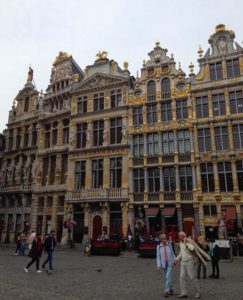 first and that is the way i felt half of the time i stayed there. The wild mix of architecture, from decorative, golden guild houses to big, glass office buildings in the next street. But i also learned to love the people in and their mentality. Tom told me a lot of funny but untrue tales and the special ways the people of Brussels dealt with problems. For  example they just covered the river Zenne in the late 19th century with earth instead of cleaning it up. It had become a health hazard because everybody used it as their trash can.

Its really good to have a tram card in Brussels. You can visit all the quarters.  Brussels has 19 mayors because why have one if you can have for one for every part of the city. My favorite places to spend time were the terrace on Place Poelaert Plein by sundown with a view over the hole city, eating congolese food at the Rue de la Longue Vie in Little Africa and the comic festival was pretty amazing too. 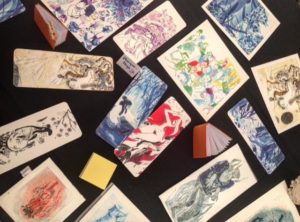 The legend of Brussels is not something new to anybody. I’m sure even every tourist knows about it after one day. Some might have guessed it already, it’s the famous Manneken Pis. Located in the old part of Brussels near the Grand Place a little bronze boy urinates in to a fountain and everybody loves him. The statue was designed in 1388 naked but nowadays you see him dressed up most of the time and you even can visit the  Musée de la Ville  where all of his clothes are on display. Because the statue is so beloved by the locals many armed forces have tried to steal it in the past. The story goes that after the french grenadiers stationed in Brussels attempted to steal in 1747, the population rebelled against this deed and threatened a bloody revenge. To calm things down, the King of France  offered a outfit made of brocade, embroidered with gold for Manneken Pis. He also allowed him to carry a sword and gave the statue the Cross of St. Louis, the royal french military order. 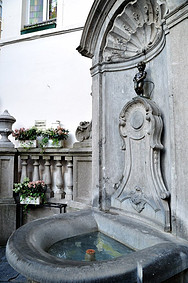 There are more than one origin story of the Manneken Pis statue.  The most common one, at least of that i know, is about a little peasant boy. The little boy wandered around out side the city gates as he heard enemies forces approaching and he hid. He saw how they buried dynamite underneath the gates to blow up the city gates and walls. He did not quite understand all the enemies whispered to each other but he knew it was not something good. The boy did’t not know what to do. There was no time to get a adult or warn someone so he got to the end of the fuse and urinated on it. And so a little peasant boy put out the dynamite and saved Brussels. 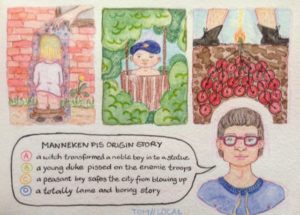 Other stories take about the little Duke Godfrey III of Leuven, a two-year old that was hung in a basket from a tree to bring the troops luck during a battle in Ransbeke. From high up he urinated on the enemies and they lost the battle. Another legend speaks of the son of a noble man, who left a procession to urinate on the wall of a witch’s house. Furiously the witch transformed him into the statue.

Near Manneken Pis you can also find his sister Jeanneke Pis. But she has not so much history to her. A restaurant owner put her up to get more business. There is also statue of a dog urination. So you can see the fame of Manneken Pis really caught on.