We wake up, we pack, and we say bye.
Elena left in the morning to get back to Italy and she had a terrible 8 hours trip awaiting her because of strikes and delays.
I sat in my cabin contemplating Elena’s health, my options, and the feasibility of the trip but still decided to continue Navigandum per hereditatem.
The rest of the morning a part of the afternoon were devoted to cleaning up the boat and contacting every young sailor and heritage enthusiast possible, as well as trying to reach out to Elena’s contacts in the Netherlands hoping to find a travel companion for the following weeks.
Later in the afternoon, I decided to take the chance of visiting again Harlingen to discover more about its heritage, and I decided to start with the City Council Museum het Hannemahuis which I have never had the chance to explore. The Gemeentemuseum is located in the major street of the village and I only needed to walk a few minutes under the bluest sky I had seen in days. 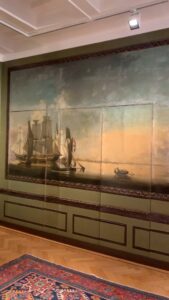 After getting married to Liesbet Scheltema in 1744, the merchant Sjoerd Hannema moved into the house they had just purchased. He had a new front wall constructed. The right side of the building can still be identified by this bell gable. Another member of the Hannema family, Sjoerd Jacobus Hannema, was responsible for the construction of the left wing of the house in 1825. This wing featured a cornice. Leendert Jacobus Hannema was the last descendant of the Harlingen merchant family to live in this house. He was known as Jacobus. In 1957, he established a museum in a portion of his home that he owned. He passed away in 1964, leaving the house as a bequest to the city of Harlingen, which carried out the terms of the will by maintaining the museum in the residence. Objects that are closely related to the history and art history of Harlingen are collected and displayed. These objects include Harlinger tile and pottery, maritime objects, centuries-old paintings (such as Granida and Daifilo by Jacob Adriaensz Backer), photographs, silverware, various old documents, and furniture. In addition to that, there is a room named after Simon Vestdijk. In this section of the museum, in addition to a number of other items associated with the Harlingen-born author, visitors will have the opportunity to view his entire body of work in its first edition form. 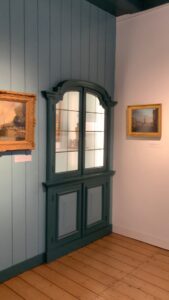 Entering the museum from the gift shop and passing into the original waiting room of the house suddenly made the reasons why I want to take this trip resurface. The meaningfulness of heritage sites and their impact on individuals and communities is invaluable, and the threat posed by climate change is real. Being Friday afternoon I did not manage to find a manager or senior employee of the Museum available to talk about its eventual adaptive strategies, therefore I simply enjoyed the visit.
The first room is devoted to the history of the city. Harlingen is one of the Friese elf steden, which are eleven cities in Friesland that received city rights in the 13th century and also serve as the name of the Elfstedentocht skating marathon. Harling is possibly the least Frisian of all of them, and few people speak Frisian as their native language. It is a charming little port town that became wealthy through fishing and trade. Numerous commercial boating routes continue to depart from here for Scandinavia and beyond. Some of the original fortifications, the canals, and a significant number of historic warehouses and mansions have withstood the test of time. Harlingen began to expand in the 12th century when monks from a nearby monastery dug canals to facilitate trade in the region. Harlingen was granted a city charter in 1234, as a result of the increased commerce. In contrast to the nearby university city of Franeker, the town remained of minor importance for several centuries. However, as the harbour expanded, so did Harlingen’s wealth and reputation. Today, the majority of shipping is associated with the transport of salt from the local salt factory, and the harbour (s) are the most vital part of the inner city. This information was displayed through physical historical artefacts and digital tools were accessible even to kids, sadly no English was available and it was the same for the whole exhibition. 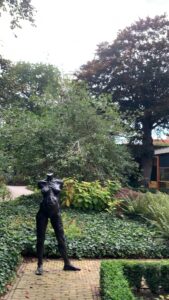 After passing a beautiful garden containing statues by local artists, I reached the second room that was dedicated to a focus on the sailing traditions of the Netherlands and on their history in Harlingen. Skilled hands constructed ship models with fine ropes and miniature pulleys for both decoration and crew training. Shipowners also enjoyed having their vessels painted, preferably at sea with full sails. The ship portraits represent the owners’ pride. In addition to objects such as a figurehead and a foghorn, the maritime collection also contains stories such as that of Commander Klaas Hoekstra. According to his journal, he left for Greenland in 1825 in order to hunt whales. His brand-new galley ship shattered in the Arctic ice, but after a year filled with horrors, the crew returned to Harlingen despite being presumed long dead. Additionally, the merchant navy and admiralty are discussed, and sadly no information was available on the role of Harlingen in the slave trade.
Harlingen is the birthplace of the pottery industry in Friesland. This region has utilised the technique of tin glazing for over 400 years. The Hannemahuis 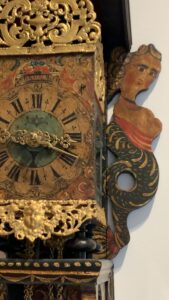 provides an excellent representation of what Harlingen has produced in recent centuries, including loose tiles, tableaus, an earthenware colander with a harbour view, playful saying dishes, and much more. Harlingen was also one of the most significant centres in the Frisian silver tradition. I could see how much silversmiths had to offer in the silver room. Harlingen family Radsma served as “city clock players” for more than 250 years; they determined the daily rhythm in Harlingen. The museum’s clocks are true works of art: the dials are exquisitely crafted and painted, and the cabinets are glued with fine veneers, inlaid with flower and bird motifs, and topped by angels playing the trumpets. 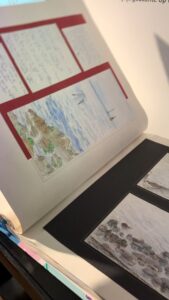 The Museum, in conjunction with the City Council, is undertaking the project known as “Thoughts of the Sea.” At the top of the Zuiderpier in Harlingen is where you will find the city’s post box. Hikers are encouraged to share their own personal reflections, poems, drawings, and love letters by posting them in the red container. Anyone who wishes can write down their “thoughts by the sea” and place them in the former PTT’s red letterbox to share their thoughts (anonymously). The mailbox is emptied once a week. The initial idea was to create an annual booklet filled with beautiful, unique, or amusing letterbox contributions, but now some can be seen in the exhibition, which features a large number of very personal messages that, at times, can be quite moving.
I was very touched by one contribution in particular which talks of the sea and how they see it changing not only daily basis or following the seasons, but how much harsher and more dangerous it became since they were a child.

Sea, sea, which changes every day, when I turn around and when I come back.
Sea, sea, it changes with the seasons you never waste time on women and songs.
Sea, sea, rising and falling what happened to your conscious rhythm?
Sea, sea, now you’re higher and higher, hitting the dams with a shaken rhythm.
Sea, sea, sometimes disappears, leaving the coast bare and dry.
Since I was a child I played and I saw in you a friend to respect, but
sincere, sea, now I no longer recognize you and the safe springs of life.
Sea, sea, will you enter the harbour and destroy the oldest relationship in the world?
I should perhaps ask the same of us, men who cry what you are no longer. 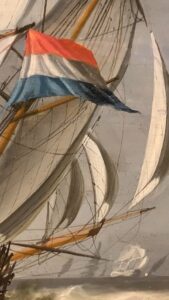 After the visit, I stayed a bit longer in the quiet library annexed to the museum working on notes and pictures from the previous day. In the meantime, I realized it rained and the sky was back to its deep grey. Walking back to Tetide and Mosè I received a positive message from a friend, Allegra Grillo, who was just looking for something to do after her gradu  ation in Law. She told me she would let me know, after having properly thought it over, if she would have joined me in Navigandum per hereditatem.