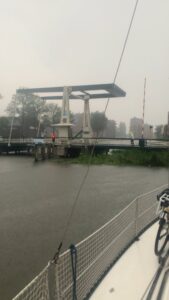 We left Dokkum having the sky crying insted of us this time.

Planning to leave at 9, when the Altenabrug would open for the first time, we waited an extra half an hour hoping that the rain would calm down. Sadly we did not have any luck.

Elena also woke up worried as she could not hear well from her right ear and so we started the second day of our trip with two weight, both mental and physical.

The plan is to get to Harlingen as soon as possible considering the 6 hours and an half of navigation – still one less hour compared to yesterday – and to talk to local citizens on their perception of climate change and its impact on cultural heritage. The rain is so strong that it is almost painful when it hits your face as the wind gets quite strong too from time to time. With Elena being sick and relieving hard moments lived in the past, Gloria stays on the helm most of the time.

on water and canals 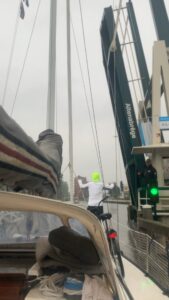 Even if the rain is terribly annoying and soaked us despite many layers of technical cloathing, we are also quite relieved to be able to experience the “normal” Dutch climate. In fact, as of the month of August, the Netherlands has been declared to be in an official state of water shortage. Comuing from Lombardy, the Italian region of which Milan is capital and that hosts all major lakes – Como, Garda, Maggiore, and Iseo -, we are well familiar with water crisis.

It may sound strange, but the nation of dikes, canals, rain, and reclaimed land is actually suffering from a lack of water. The effects of climate change are already being felt all over the world, including in the Netherlands, which is known for its abundant rainfall. A drought not only causes the amount of available fresh water to be lower than it should be, but it can also have an effect on the quality of the water that is used for drinking. Because there is less water flowing, there is a greater possibility that harmful bacteria will grow, which poses a threat to the quality of the water that is used for drinking. Another danger associated with drought is that salt water could begin to seep into the groundwater and the soil, which would present difficulties for agricultural practises in the Netherlands.

During times of crisis, new and often perplexing terms are coined, and it is not always easy to understand what they all signify. You have probably come across the phrase “drought phase 2” in recent times, and you are probably curious about what it means. To put it succinctly, it indicates that a crisis team has been assembled in order to deal with the situation. The group has been in charge of determining the destination of our extremely valuable fresh water. It has been four years since the last time that drought phase 2 was announced, so despite the fact that there is no need for panic, the situation should definitely be taken seriously. 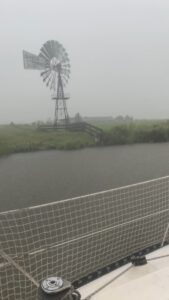 Due to the lack of precipitation, dike walls have a greater risk of drying out and becoming unstable. Dikes are typically constructed out of peat. Specialized boats that pump water from the canals onto the embankments of smaller dikes made of peat and built primarily inland along canals and rivers are used to irrigate the embankments of these smaller dikes. Due to the fact that the country is expected to be plagued by droughts in 2018, 2019, and 2020, their use is becoming increasingly widespread. There has not been sufficient precipitation to adequately hydrate the levees and replenish the groundwater. It is against the law for farmers in the southern part of the Netherlands to use water from canals and rivers to irrigate their fields.

The Minister of Infrastructure and Water Management, Mark Harbers, has issued a plea to the general public “to give careful consideration to the question of whether they should wash their car or fill their inflatable swimming pool all the way up. The Netherlands is a country built on water, but water is also a precious resource in these parts.” According to what he had to say, “the water shortage is already having a negative effect on shipping and agriculture in particular” 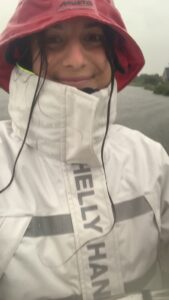 The low water levels in the rivers and canals are making it difficult for barge traffic as well as the traffic of the smaller ferries. And we have been experiencing discomforts as well, even in these two short days of navigation. In fact the inland water infrastructre, part of the National Heritage of the Netherlands, works thanks to a very delicate balance between sea water, water coming from the dried lands, river water, and rain. When one of these key elements is missing the whole system is shaken and multiple actions of transferring water where needed are necessary. This causes sluisen (dams) to be operated more frequently making our trip longer as often they can be left open in water-balanced situations. Also the levels of the canals are sometimes unpredictable making the navigation more stressfull.

Part of the cultural landscape of the Dutch countryside is the green layer of plants that grows on the surface of canals during the summer and that survives until the end of September normally. These plants thrives in warm still water, keep the temperature stable, and provide shade and shelter to local fauna. Because of the need to move water around and the lack of rain of this summer, we could not see these traditional green carpets on the canals and we fear for the already much anthropized ecosystem. 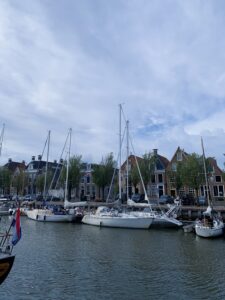 Elena’s hearing got progressively worse during our trip and passing spiked canals of the capital city of Fryslan, Leeuwarden, we decided she needed to go to the hospital as soon as we would get to our destination. Soaking wet we managed to get to the outskirts of Harlingen around 4pm and we starte     d manouvering to get in the first harbor before the dike as we planned since the morning. Being the sluis doors open, the tide was too strong for Tetide engine to safely enter the small gate of the first harbor. We then decided to cross the sluis with a very strong favorable tide that pushed us at the crazy speed of 11 knots between the two tight 10-meters cement walls leaving us excited and a bit shaking. After almost half an hour we managed to enter the Noorderhaven and we docked next to another sailboat. The nice Dutch owners, together with other German boat-neighbors, helped us get Elena to a doctor. He prescribed her cortisol and suggested her to get back to Italy as soon as possible to get urgent care. 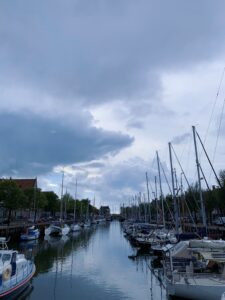 Elena rested and planned her trip home while Gloria started looking for another person to continue the trip with. Both tired, worried for one-another, and for their commitment to the trip, we went to sleep hoping for better winds tomorrow.