We untied Tetide from its berth.

We cried a bit, we smiled a lot.

Groningen is behind already, and Dokkum very slowly approaching.

In fact on Tetide sailboat, a C&C 34/36 from 1989, we have an average speed of 5 knots, 9,3 kilometres per hour. The right rate to take in all the Dutch landscape has to offer us. The first day was a good one. No rain, and little wind, which is always good when navigating a tight canal and you don’t want to get stuck on the muddy banks. 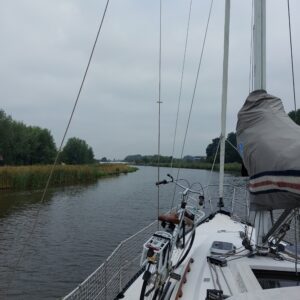 It was also a good day for the most favourite hobby of sailors in Dutch canals: cow-watching. They are many, pacific, a bit annoyed by the sound of the low-consumption engine. They resort to looking at you with their lost gaze, and keep chewing their grass. In these moments you find yourself embarrassed by your own presence, willful to pet those big, calm eaters, and conscious of their terrible impact on the climate. Intrigued by our thoughts, we researched a bit of the facts while passing through the Lauwersmeer: the area where in ancient times, fresh and saltwater flowed into each other in the Lauwerszee. Fear of flooding led to the construction of a dam in 1969 when a beautiful new landscape arose on the former seabed, a real bird paradise and a National Park. 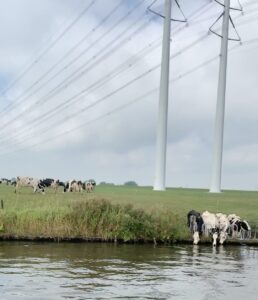 Flat, verdant fields dotted with horses, sheep, and the world-famous black-and-white cows would probably be what comes to mind when one imagines the countryside in the Netherlands. This is the image that most people have of the Netherlands. And there is some truth to each stereotype: there were an astounding 1.57 million cows in the Netherlands in 2021, which is almost one-tenth of the country’s human population.

Despite the fact that agriculture is responsible for 16 per cent of the Netherlands’ total greenhouse gas emissions, the Netherlands are the second largest exporter of agricultural products in the world, behind only the United States. Methane is one of the most powerful greenhouse gases, and cows’ digestive systems are a major source of methane emissions. In the Netherlands, livestock farming is one of the primary contributors to the emission of greenhouse gases; as a result, climate change poses a threat to the low-lying fields in the country. In addition to this, livestock produces manure, which, when combined with urine, results in the release of ammonia, a compound containing nitrogen. An excessive amount of nitrogen can cause damage to sensitive natural habitats if it enters lakes and streams via farm runoff. For instance, it can encourage algae blooms, which can reduce the amount of oxygen present in surface waters.

The Netherlands has been dealing with what it refers to as a “nitrogen crisis” ever since the highest administrative court in the country found in 2019 that the Dutch government was in violation of EU law by not doing enough to reduce the amount of excess nitrogen that was present in sensitive natural areas. To reduce the amount of nitrogen oxides released into the atmosphere, the daytime speed limit on highways has been lowered to 100 kilometres per hour, gas-guzzling construction projects have been halted, and a new law requires that 50 per cent of protected natural areas have healthy nitrogen levels by the year 2030.

Now, civil servants working in the ministry of finance and agriculture have drafted proposals, one of which includes reducing the number of livestock by 30 per cent. This plan is one of the most radical of its kind in Europe. Farmers in the Netherlands are finding themselves cornered by the government, which is giving them the ultimatum that they must either make their farms more friendly to the environment or find new employment elsewhere. Some farmers could be forced to sell their emissions rights and possibly even their land to the state under two different scenarios that have been proposed. 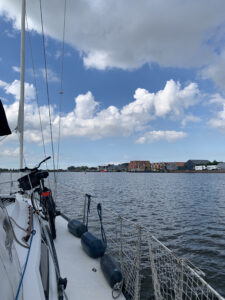 To be expected from the Dutch, who always manage to disrupt the established order of things. They had the ingenuity to construct a network of dikes and canals several hundred years ago so that they could live on land that would have otherwise been inundated by flood waters. This allowed them to continue to exist in the area. The Netherlands are also responsible for the conception of sustainable cell-cultured meat; the leading start-up company, Mosa Meat, has its headquarters in Maastricht, which is located a train ride’s distance southeast of Rotterdam. And now in the middle of Rotterdam’s Merwehaven port, where ships used to dock, there now stands a floating dairy farm: a three-story facility spanning 1,800 square metres, the farm has been open since May and is currently home to 35 cows as well as 4 calves that were recently born.

Food production that takes place closer to where consumers live and that is done in a “climate-adaptive way” is what the owners of this property hope to highlight with its unusual setting, which stands in stark contrast to the typical landscape of rolling green hills. These cows are a part of an experiment being conducted in the Netherlands to rethink the way in which cities are supplied with dairy products while simultaneously promoting a more sustainable food cycle. The cows are fed the grass that has been removed from nearby soccer fields, the potato peels that have been discarded by businesses that make french fries, and the leftover bran that has been removed from nearby windmills. Electric cars are used to collect these resources and transport them to The Floating Farm where they are used.

We are not sure this is a solution that will be able to solve the impact that livestock has on the Dutch climate and waterways, therefore threatening the cultural heritage that is always directly connected or touched by water, nor that it will allow the cultural landscape and traditional activity of raising cows. But it surely represents a laudable initiative of adaptation. 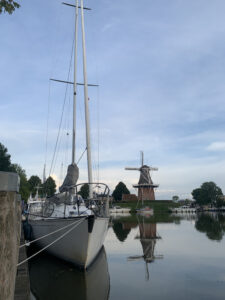 Continuing our navigation we left the province of Groningen and entered Fryslân – or Friesland, in Dutch-, the northwest province of the Netherlands that maintains a unique culture and pride. From their language, endangered but spoken and learned in school by many, to their versions of traditional food, and their immense sailing skills and history. The Wadden Sea, part of the World Heritage, can be found along its borders and completely encircling its barrier islands. In the summer, the province is known for its famous skûtsjes sailboats, which cruise along the province’s lakes and canals. In the winter, the province is known for its Frisian skaters, who take to the ice with their hands clasped behind their backs.

We finally got to the lovely city of Dokkum on the canals that maintain the star shape typical of the defence system of the 16th century and we docked right under the Zeldenrust, a smock mill. We enjoyed a walk in the beautifully preserved town centre and we celebrated our first reached goal with a cold beer immediately followed by some hot tea.