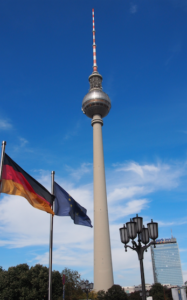 Wanting to discover and learn more about World Heritage Sites in Western and Central Europe within the context of urbanisation, architecture, society and culture we thought Berlin, with its rich history and multicultural atmosphere, a great place to begin our trip around Europe. While manoeuvring most of the city by foot and public transport, we got a first hand impression of Berlin’s broad spectrum of architectural styles which indirectly speaks to the city’s turbulent history.

The mixture of neoclassical facades, Parisian building models, modern housing projects, grandiose structures and monumental edifices like the Berliner Fernsehturm speaks to Berlin’s many phases – from First, to Second World War and the division posed during the Cold War – and show how the denizens responded to periods of both adversity and prosperity. 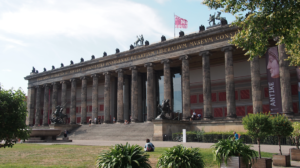 In light of Iga’s research, we organised a meeting with Dr.Anke Zalivako from Ladesdenkmalamt Berlin, who is responsible for the protection and preservation of major World Heritage SItes in Berlin such as: Museum Island, Palaces and Parks in Potsdam and Berlin and Six Berlin Modernism Housing Estates. The meeting was very insightful and Dr. Anke told us a lot

about the particular challenges that come with preserving World Heritage Sites. Perhaps especially interesting was it to learn more about the modern housing project and the difficulties that emerge in preserving something that is still in use by the public. 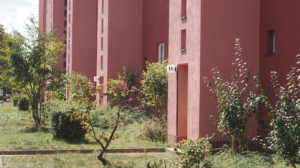 After the meeting with Dr. Zalivako, we begun to see the city in a different perspective as we now knew more about its architectural past and the changes particular neighbourhoods wen

In curious pursuit of the Berlin Modernism Housing Estates we decided to see the Britz Residential Estate, which includes the Famous Horseshoe Estate. Although perhaps nothing special to a modern, its accolade as a UNESCO World Heritage Site is more than understandable. At the time of its inception in the 1920s, the Hufeisensiedlung was a highly innovative housing structure, meant to improve living conditions of lower income families by offering affordable, airy, sun-lit residencies, 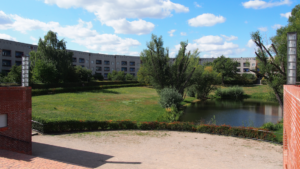 with individual kitchens, bathrooms and access to green spaces. The modern housing projects was also a shrewd move in tackling the housing shortage Berlin then suffered.

The idea of modern housing might have been too innovative to be fully appreciated in the 1920s. However adding Modern Estate Building of Berlin to World Heritage SItes list was an important decision as it is clear to see how much of an impact this way of making buildings has since had.