The third city on my list happened to also be the place where The Organization of World Heritage Cities (OWHC) Regional Secretariat for Northwest Europe and North America is seated – Regensburg. This place cannot be described with anything less than immensely rich history, medieval remains and large heritage. Regensburg was added to the UNESCO World Heritage List in 2006 because of three major criteria.

First of all, the architecture of the Old Town in Regensburg represents and proves the city’s important role as a trading centre in medieval times. Thank to the Danube river, which runs through the city, Regensburg was a transition point for traders between Italy, Bohemia, Russia and Byzantium. The look of the city has also been largely influenced by different cultures and architecture styles throughout the years.

Secondly, Regensburg was part of the Roman Empire, and roman remains are still to be seen around the city. People can also see the remains of two Palatine palaces from the 9th century, as well as numerous other historic buildings, which showcase the importance and wealth of this are and its community.

Thirdly, the centre of Regensburg was lucky enough to survive the period of the Second World War, and thus preserve its authenticity and medieval vibes. The UNESCO listed part of Regensburg – The Old Town with Stadtamhof, exemplifies what a medieval central-European trading town used to look like.

Now a bit about my adventure in Regensburg..

Despite the rain being my company throughout almost my whole journey until now, Regensburg still greeted me in an extremely warm and welcoming manner.

At this point of the journey, realising I still have a long time ahead to spend roaming around Europe completely by myself, gave me a certain level of anxiety. Luckily, I got to meet up with one of the other scholarship winners – Klara, who currently lives in Regensburg. Experiencing the city through the eyes of a local, as well as the night life, was exactly what I needed at this point. Did you know that Regensburg is home to over 500 bars in the city centre alone, which makes it the largest concentration of drinking establishments in all of Germany!? 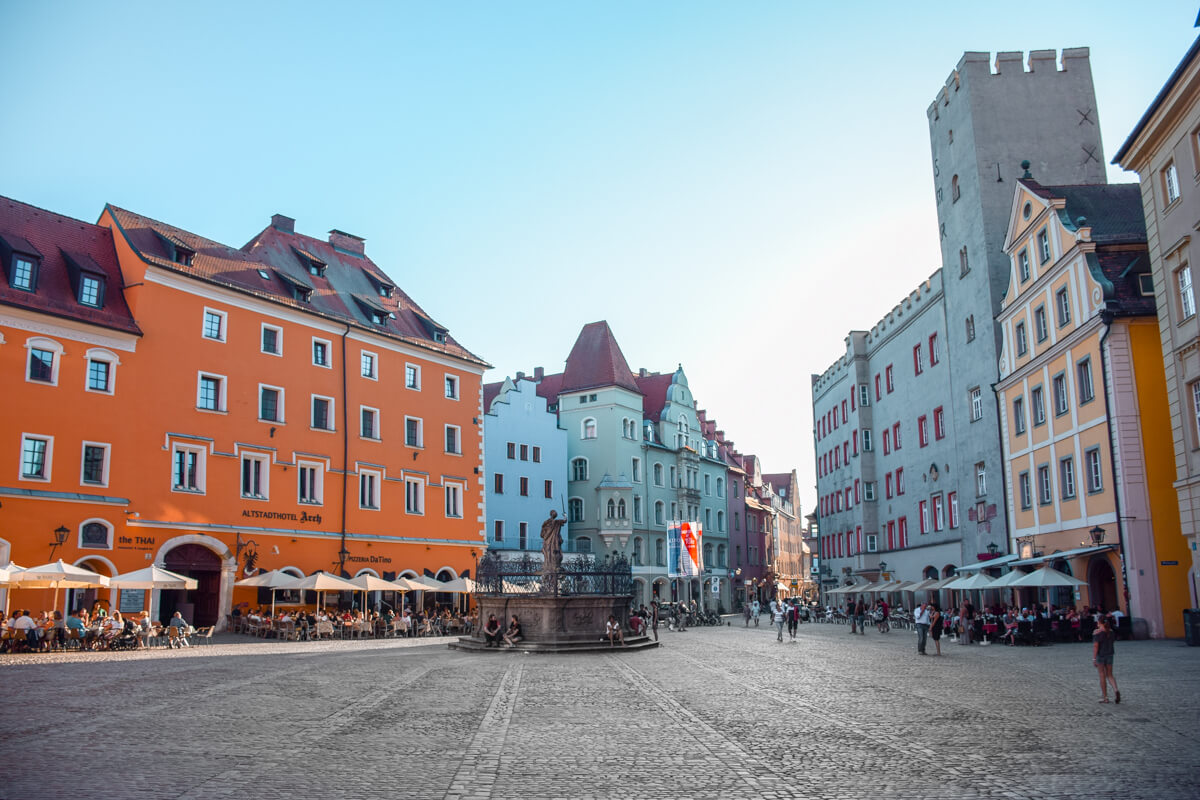 The next day was spent learning a lot about Regensburg’s history and heritage from the lovely Monika – the organisator of this whole amazing project. Thanks to the fact that she is also a tour guide, Monika was able to tell me so much about her city.

Visiting the UNESCO Information centre is an absolute must for everyone who wants to learn more about Regensburg’s history and importance. The centre consists of many interactive displays and ways of learning, suitable even for children. In the same building you can find the stairs, leading up to the top of the clock tower and revealing a fascinating view over the Old Town and the Stone Bridge.

One of the highlights of my visit in Regensburg was a boat tour along the Danube river. And when I say boat, it is more like a decently sized ship. There were three major reasons why this boat ride turned into an exceptional experience. On one hand, you get to see the city from a different perspective. Observing the beautiful Old Town and Stadtamhof from the water should be on your list of things to do in Regensburg. On the other hand, during the 1-hour trip (one way) I got to make friends and talk with some locals and tourists about why we all chose to visit Regensburg and what other places around the country are worth visiting. And thirdly, the boat took me to one of the biggest attractions of Regensburg – Walhalla – a hall of fame, that honours distinguished people in German history. Walhalla may look impressive in photos, but once you see it in person, you get a completely different feeling for how large and spectacular it is.

I spent 3 days in total in Regensburg and this time was perfect to see pretty much everything and also be able to feel and enjoy the vibes of the city.