– The Legend of the Golden Eel – 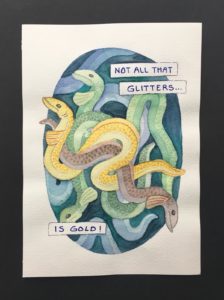 Long ago, when the Golden Handrei was still called the Sint-Gillisreitje, the water of the canals was so pure that it was filled to the brim with all kinds of fish. You only had to throw your net in to the water and within minutes it would be filled miraculously with perch, bream, pike, carp, roach and eel. There was a lot of fishing going on in the canals. But it was generally known, to better stay away from eel. The eel looks like a snake-like creature, that lazily lay under the mud all day and only comes out at night. The animal must therefore be possessed by the devil the people of Bruges said. There was an unwritten law that prohibited fishing for eels. You better not get the devil out of the water …

Now there was a man, it is said that he came from Lissewege, who did not care much about those laws and traditions. One evening he laid a trap in the Sint-Gillisreitje. The next morning, he picked it up full of winding eels. His eyes sparkled with pleasure because he caught so many delicious fish. His wife would make a nice mess of it. They would not have to fear for a hungry stomach for a few days.

To his surprise he saw that there was also a beautiful golden-yellow eel winding between the others. Curious, he lifted the trap a little higher to hoist the golden eel on dry land. As he was pulling the fish out, a strong, golden hand suddenly arose from the water. It grabbed the fisherman by the ankle and dragged him into the water. No one has ever heard anything from the poor wretch and since then the inhabitants of Lisseweg have been called mockingly “the eel catchers”. 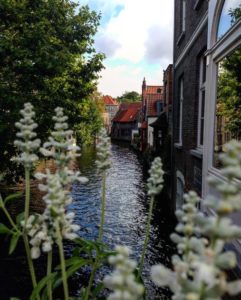 Till this day it is rumoured that you can see at night in the moonlight, a shining golden hand, in which a golden eel twists, rising from the water at where the fisherman vanished. It is as if the devil himself wants to warn the fishermen to stop fishing for eels. Luckily this is not possible, since that day all eels disappeared from the “Reien” (the canals running trough the city) and they never returned.