In order to break-up what would otherwise have been a 14 hour long bus ride from Budapest to Warsaw, we decided to enjoy a day long intermission in the beautiful Czech city of Brno – the country’s second largest city. Al 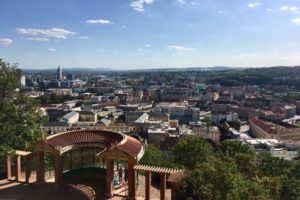 though, we could not find any luggage lockers in the city, which naturally affected the possible scope of our intended urban exploration, we still managed to see most of what the old town area had to offer, including the cabbage market, the Spilberk Castle and The Cathedral of St. Stephen and St. Paul. Considering the aim of this trip is not only to explore new cultures and cities across Europe but also represent Unesco world heritage, we felt it a be a pity if not chancing to visit the unesco protected functionalist Villa Tugendhat, which lies in a villa district east of city centre, behind Park Lužanky. Although we arrived too late to see th 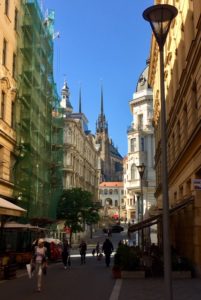 e interior of the building, the impression we got of the outside sufficed to support what Dr. Anke Zalivako had told us about it being a modern castle.  As we waited for the bus to take us to Warsaw, we realised how much bigger Brno was than we had expected it to be and we regretted not having more time there as we would have loved to explore what lies in the outer districts of the city, such as the Veveri Castle, the Brno reservoir and the Moravian Karst.