In the free city of Regensburg lived Klara, the daughter of a tinsmith, who was usually called the “Liebfrauenbildlein”; because she was exceedingly beautiful in face and figure. She grew up to be, god-fearing, devote and honourable, as it befits a fine virgin.

One Sunday, when she returned home from the early mass, it happened that a stately nobleman came in her way; he was dressed in velvet and precious finery and wore a heavy gold chain on his chest and a beret with big feathers on his head. And when he saw the lovely maiden, he stopped and looked after her, almost shocked, until she went around the corner. The next Monday, according to her habit, Klara was at mass at St. Cassian’s, and when she stepped out of the church, the nobleman stood there and greeted her. And on Tuesday he greeted her again and suddenly put a little letter into her hand. Hence the virgin blushed deeply and thought she was holding a glowing coal between her fingers. But she did not want to drop the letter in fear of the gossip. Instead she carefully hid it in her scarf, with the intention of throwing it into the fire at home. And if she had done so, she would have been spared great suffering.

But in her small chamber she thought different, because she liked the delicately folded parchment, but especially the gold embroidered ribbon with which it was wrapped. And as she was pondering and turning the little letter back and forth in her hand, suddenly a little voice, like the chirping of a cricket, said to her: “Well, you foolish thing, why do you hesitate so long? Hot off the press! Dead letters don’t bite.” But whoever spoke like this? It was a tiny, barely inch-high woman, crouching in a corner at the fireplace. At first the maiden was horrified by the spook; but because the little one seemed to be untroubled and even acted friendly, she let herself be persuaded and reached for the scissors. And at the moment the tape was cut, the woman grew one finger length higher. 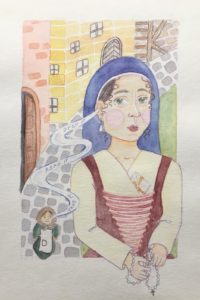 On Wednesday, Klärchen did not go to mass, but locked herself in her chamber as if she were ill. In the meantime, however, she looked for the letter again and read how the nobleman had developed a fierce love for her and could never let go of her and wanted to serve her as an honourable, honest suitor. Such a thing was written in the letter with even fancy words. And while she was still reading, the woman appeared again and cried, “Listen, my daughter! Don’t you hear the sound of spurs in the alley?” And Klärchen hurried to the window and saw the nobleman walking along. He noticed her hiding behind the curtain, because the lovesick have hawk’s eyes. And he greeted up, and she greeted down. But the woman giggled up her sleeve and was growing as high as a shoe, even though it had only been finger-length before.

Thursday, during the meal, the tinsmith scolded his daughter, “You dream in broad daylight and throw more salt into the soup than my palate would like, and the cat steals the meat from the pot before your very eyes.” Towards evening, in the twilight, the woman came back and carried a box of ebony under her arm and said, “Take it. It’s a memento from your suitor.” But Klara stepped back and replied: “Go away, temptress! A virtuous virgin shall not take gifts.”

Then the woman departed grumbling; but at the door she turned around again and said, “A gift is better than a purchase. Think well and see what you despise.” With these words the little woman opened the box, and – o glory! – Inside was a magnificent necklace of vain gold and richly set with pearls and precious stones. The flickering and sparkling enchanted Klärchen and her eyes began to sparkle too. She took the box and stepped in front of the mirror and enjoyed the finery very much. The woman applauded and shouted: “Now you may carry your nose as high as the Countess Monika does.” On Friday they went so far that the nobleman climbed over the garden wall in the darkness and came into the alcove for a little chat. – The little woman was already a cubit high today. – The nobleman talked quite intimately with the tinsmith’s daughter and told her even more beautiful things than he had written in the letter. Meanwhile the woman kept watch at the entrance of the alcove, and – lo and behold! – with every word of love and every handshake it grew an inch in height and an inch in thickness.

And when the couple stepped out of the alcove on Saturday, there stood a superhuman-sized woman with the circumference of a beer barrel. Klara was frightened and screamed, “What are you doing here, you brute?”; But the giantess just laugh loud and replied: “How, my daughter, do you not know your old friend anymore? I am Fat Agnes, and you have kept me well and fed me so much that I, at first a tiny thumb, have grown so tall and fat.”

It is to be known, however, that the fat Agnes was a hellish ghost, which was roaming the city at the time. Initially in the form of a thumb-length woman, it lured people from the right path by those idom and common phrases that guilty pleasure uses to gloss over its actions. And where it was not banned by prayer and devoutness, it stayed like a vampire and sucked itself full and prospered and grew to a ghastly monster.

Klärchen, poor Klärchen: After the nobleman had had his amusement with her for some time, he left her, not bothered by her reproaches and tears, and married the daughter of a rich family. Same things happened to other virgins who had been involved with Agnes, and some of them fell so low that their names were later found in the register of the Reichstag, who, as is well known, was entrusted with the care of the travelling prostitutes.

As far as the menfolk were concerned, the ghost especially seduced young people, who had untold amounts of money in their fingers. It whispered in their ear: “A few pennies will not harm your Lord – he does not feel it. A penny ain’t a silver coin!” Several of these bewitched journeymen started just with a grab into the cash register and ended up as highwaymen.

Such moral corruption made the wise council of Regensburg very much concerned, and they seriously thought about how to master the spook. Physical weapons, however, did not work on him, and so the venerable Minorite Monks were approached for aiding and abetting. According to the legend, they did not easily banish the ghost into the deep cellar of a desolate house at Bäckenspreng. It could still be heard whimpering and groaning for many years afterwards, to the horror of everyone passing by, in the time between the sounds of prayer and the crow of the rooster.