Not every morning starts in the best way. Unfortunately, today’s day brought us some trouble right from the start. Our plan was to leave Amsterdam and head for Leiden by crossing the inner canals. To do this we would have had to leave at night because there are railroad bridges that open only at 3 and 4 a.m. Before leaving, however, it was necessary to take back and reassemble the engine component that had been fixed by the mechanic. Gloria immediately tried her hand at reassembling the parts and tried to access the engine to see if there were still water leaks. Unfortunately, a few drops still gushed out, but this time from the hose instead of the pump. Moreover, after a few attempts to start the engine, there was a strange noise of stuck gears and a burning smell. Immediately Gloria stopped the attempts and contacted an experienced mechanism from Italy who suggested step by step what to do to figure out the cause of the problem. The situation is more complicated than expected. Maybe it’s the batteries, maybe it’s the battery charger, or maybe it’s the starter motor. Hard to tell. 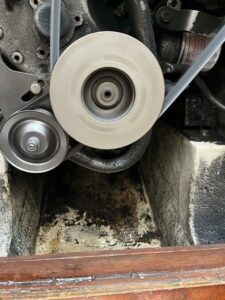 After a long and agitated morning, we understand that we had to wait and that we are unlikely to be able to sail in the next few days. We decide, therefore, to break away for a while, have lunch, and go for a walk around downtown. Our afternoon is once again absorbed in artistic discoveries, this time in the field of photography at the Fotografiemuseum Amsterdam (FOAM). As soon as we started visiting we bumped into “Blessings from Mousganistan”, an exhibition by self-taught photographer Mous Lamrabat (Morocco, 1983). Lamrabat’s work is characterized by beauty and a sense of hope. His work is an exhilarating and occasionally confronting fusion of his diasporic life, employing beauty and humour to create powerful new narratives about sensitive issues such as racism, religion, and women’s rights. The artist conveys a message of love through a colorful and eclectic visual experience in Blessings from Mousganistan. 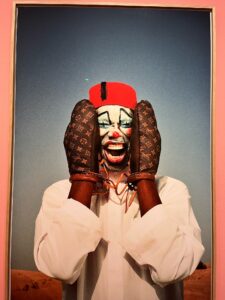 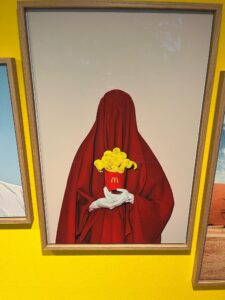 But the most interesting part was exhibited at the first floor. The group exhibition is entitled Foam Talent 2022 and presents the work of a new generation of artists. The 20 participating artists examine both the world around us and the one within – without fear of discomfort or pain. Climate change, political conflict, discrimination, displacement, and social justice issues are addressed in the works, which remind us that photography has the ability to capture the unspeakable. One of the artists that impressed us the most is Yushi Lii. Moving deftly between vulnerability and quiet violence, so the work of Yushi Li holds the viewer in its thrall. Her gaze falls ipon contemporary masculinity, desire and eroticism, as well as the often-unspoken awkwardness of a potentially sexual encounter. 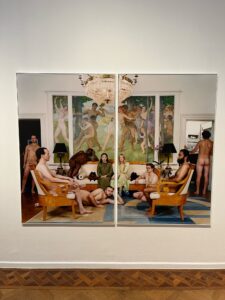 But what we liked the most was Kata Geibl’s masterpiece, “There Is Nothing New Under The Sun”. In this monograph she interrogates the rampant individualism that underpins our contemporary social, political and economic system and how capitalist ideology infiltrates our consciousness. She brings this to life by means of photographs, quotations, critical theory, personal essays and cultural references. The book invites the viewer on a journey of immense existential questioning as we confront what it means to be human in this moment. There are no easy answers, just an impulse to unsettle establishing narratives, expose the underlying ideology and metabolize the chaos all in the spirit of transformation.
Reading and looking at her images and words was a mental journey that we will not forget easily. He felt so lucky because we had a chance to take two of her photographs directly from the exhibition wall. 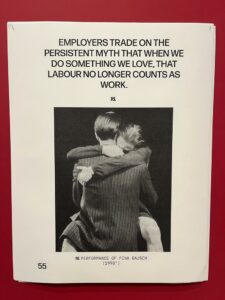 Once again, art has used its super powers to elevate our mood. So, happy and content, we returned to the boat, took a quick shower and then took our bikes back to the typical Dutch restaurant where some of Allegra’s university classmates were waiting for us. The restaurant’s name is ’t Zwaantje, instead of tablecloths there are thick Dutch carpets, there are copper pots hanging from the ceiling and dim lights reminiscent of candle lighting.
How nice to get together in such a typical setting! after sitting down at the table, we immediately began to tell the boys about our trip and adventures. Only after a while did we remember to order! We tried many different specialties such as “Saté van varkenshaas met pindasaus”, which is sate of pork tenderloin with peanut sauce, and “Kip in ’t pannetje”, which is chicken in a pan. And of course, we had a lot of Dutch fries! 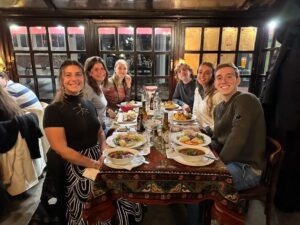