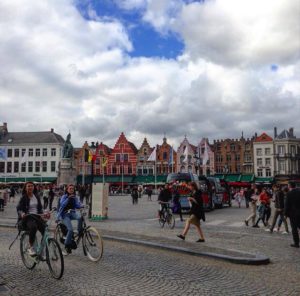 Bruges is a beautiful city. The old town really looks like a postcard. But because of the exceptional big amount of preserved historic buildings, it’s very attractive for tourists. And too many of them are coming to Bruges. Since 2016 the visitor numbers have risen almost a million per year.  In 2018 there were 8.3 million visitors compared to 20000 residents in the Unesco protected city center.  Because of the rising numbers Buges doesn’t even promote itself anymore. From the 8.3 million visitors 6 million are day trippers, meaning that they don’t stay overnight. They spend only half of the money that regular tourists spend on their trip. Were other cities are campaigning for more visitors to bring revenue to the tourist sector, Bruges is drowning in them. But sadly it’s not the right kind of tourists. 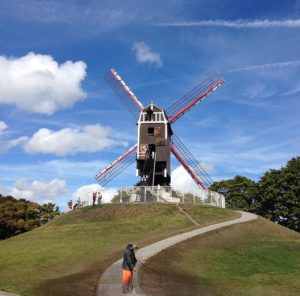 One day doesn’t do Bruges justice.  Outside the busy old town i found many gems. I went to the Volkskundemuseum “De zwarte Kat” (The black cat) and lost myself in the oldtimey rooms. I especially liked the pharmacy, the full functioning confectionery  and folkloric games. Speaking of cats Bruges has also a cat cafe called Puss and Books, were you also can adopt cats. Near the cafe you can find a neighborhood guerrilla gardening project. Another wonderful relaxing place is the windmills. After that go along Langestraat fo find second hand and alternative shops. 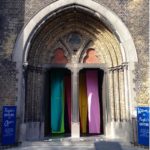 My real highlight was kind of a suprise find. The Heilige Magdalenakerk church behind the Konigin Astridpark. The YOT hosts exhibitions, plays and concerts there.  But even without a event the transformed church is worth a visit.  I relaxed on the big swing that hangs from the painted high ceiling and  enjoyed the original glass windows. 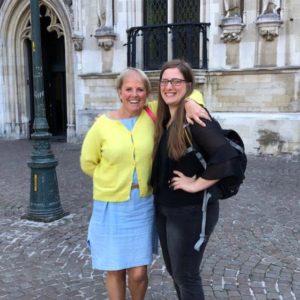 In Bruges I met up with Minou Esquenet and Leentje Gunst in Bruges to talk about the World Heritage, tourism and how both affect the city and it’s locals. Because I had the chance to talk to a city official in Bordeaux too, i now could ask question to compare World Heritage Citys from an other standpoint.  On of the my questions was about ecotourism because it was so clear to me that Bruges is swamped by tourists. We also talked about the brand new four-leafed clover plan, which is a concept to chance tourism and it’s effects on Bruges. There are four pillars to ensure the plan works: the balanced, connected, attractive and enterprising city. 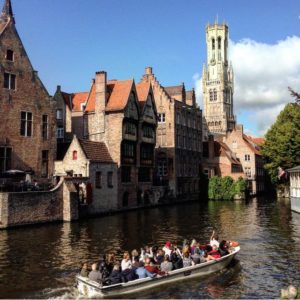 By 2024 the city wants tourists that stay longer, have more sustainable and accessible tourism and locals that love to live in the city and don’t feel stressed by the tourists. Even though most of the locals support tourism and for some their income depends on it, one third sees the rising numbers as a threat to livability and one fourth thinks tourists are causing everyday inconvenience. 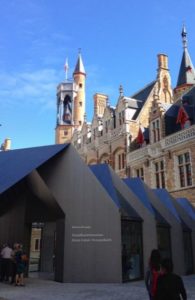 I also had the chance to visit the new Gruuthusemuseum and talk to Leentje, a city architect, about the architecture of Bruges. Everybody talks about the new pavilion you see in the picture right here. It was built on to the estate as a information and ticket center. Compared to the surrounding buildings the pavilion looks quite abstract and new. The sharp roofs are inspired by the classic Bruges house.  Many locals protest that the pavilion does not fit in and want it removed. It is important to keep in mind that Unesco does not only stand for preserving, we can and should change things , else we have no world heritage to give and future generation will live in a museum. Bruges city center is so well preserved and so it seems that for some locals this little pavilion is to much change.