In September apples start to be in-season and we went to pick them!
Magdar and Stan, the couple that hosted us in Bruges, proposed that we go with them in a forest close to the city and to join the community in apple-picking. What a great idea and a wonderful experience. None of us had ever picked apples before, so we were like children enjoying our first time.
The activity is organized by the Municipality of Bruges, which makes the municipal apple trees available for everyone one day a year. The orchard was full of families and groups of friends. At the entrance the staff gave us a basket and a stick with a net, a specific tool for picking apples.
We really had a good time while filling our basket and eating some fruit!

We conclude our morning excursion sitting in a nice dehor to drink a coffee with whipped cream and chatting about our lives. There was so much to share with them! 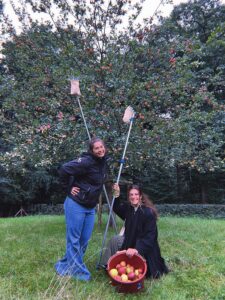 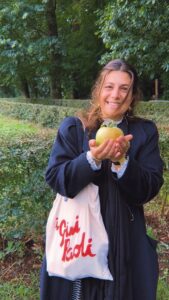 Once back home, we had lunch all together. Later, we left our hosts enjoying their Sunday and we walked towards the city center. We bought “Musea Brugge Card”, with which you can visit all open locations of Musea Brugge for 72 hours at a reduced price.

The first place that we visited was the Church of Our Lady, a magnificent medieval church that was built over at least two centuries, beginning in the 13th century. At a height of 122.3 m it includes the second tallest brickwork tower in the world (after St. Martin’s Church in Landshut, Germany) and is the tallest spire in Belgium. The church is a classic example of brick Gothic, but it is also unique due to a centuries-old connection with the Gruuthuse palace through an oratory in the chancel. The church chancel houses an impressive triptych of the Passion by Margaret of Austria’s court painter, Bernard van Orley, as well as the 15th and 16th century mausoleums of Charles the Bold and his daughter Mary of Burgundy, who died tragically in an accident.
The altarpiece of the large chapel known as the Cappella sacra, created in the 18th century in the Baroque style, enshrines the church’s most celebrated art treasure—a white marble sculpture of the Madonna and Child created around 1504 by Michelangelo. Payments made to Michelangelo by Florentine bankers Baldassare and Giovanni Balducci between 1503 and 1504 provide evidence of this date. Because the block of marble used to sculpt the Madonna weighed nearly a ton, carving locations would have been limited. Michelangelo most likely began carving the sculpture in Carrara, where he spent nearly a year in 1505. The Madonna was finished in 1506. It was most likely intended for Siena Cathedral, but it was purchased in Italy by two Brugean merchants, Jan and Alexander Mouscron. Due to a monetary disagreement, Michelangelo had the statue privately transported to the Mouscrons in Bruges instead, and it was donated to its current home in 1514. 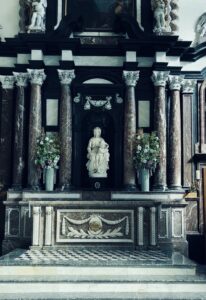 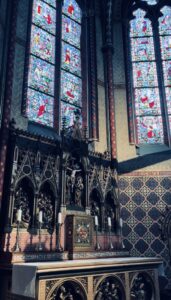 Our second step has been the Gruuthusemuseum. In the museum, we travel through three pivotal periods in Bruges’ history. First, there is the city’s Burgundian heyday, followed by the previously underexposed period of the 17th and 18th centuries, and finally, the ‘rediscovery’ of Bruges in the 19th century neo-Gothic style that is so characteristic of the city today. More than 600 exhibits, each with its own story to tell, bring these three periods to life. From magnificent tapestries to Gothic stained glass, elegant wooden sculptures to refined historical lace, period paintings to a 17th and 18th century dinner table set with silver cutlery and luxurious Chinese porcelain. The theme running through the exhibition is ‘Plus est en vous,’ which was the motto of Louis of Gruuthuse, the man who gave the palace its stunning grandiosity in the 15th century. 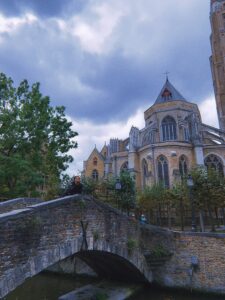 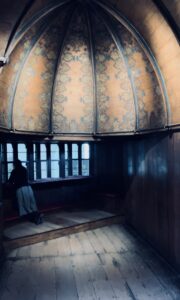 What surprised us the most was the private chapel located in the museum. With its original 15th-century oak plank floor and panelling, this extraordinary chapel connects the palace and the Church of Our Lady.  When we ended our visit, we felt immersed in the atmosphere of times gone by. 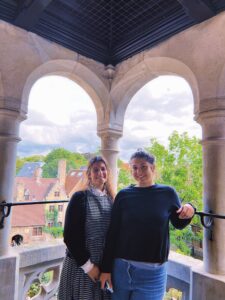 Just rounded the corner, we came across other interesting museum. Properly, it’s St John’s Hospital, one of the oldest preserved hospital buildings in Europe. The first traces can be found in the middle of the 12th century. St. John’s Hospital houses an impressive collection of artworks and medical instruments that tell the story of early hospital life and depict how hospital wards looked in the mid-17th century.

We have been really lucky because there was an exhibition, titled Underneath the Shade We Lay Grounded, took place on the ground floor and in the hospital’s impressive wooden attic. The artist is Otobong Nkanga, a Nigerian-Belgian contemporary artist. Nkanga’s groundbreaking exhibition aims to engage visitors, the historic St John’s Hospital, and Bruges in an intense dialogue. Nkanga hopes to ‘heal’ visitors’ injuries and ‘cure’ them through their connection with her art and a dialogue with the works of, among others, Hans Memling and Jan Beerblock from the Musea Brugge collection. The concept of grounding is central to this exhibition, and it runs throughout the entire exhibition display. She reconnects people with their material, spiritual, and cultural roots in this way. 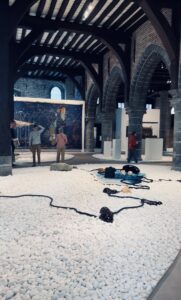 The sweet ringing of bells

When we left the Hospital, we saw that the golden hour was coming, so it would have been the perfect moment to enjoy a panoramic view from Belfort and to eat some Belgian fries.
The Belfort is the most striking tower in Bruges dates from the 13th century, stands 83 meters tall, and is a world heritage site. Climbing all 366 steps we have been rewarded with a breathtaking view of the city and its surroundings. On our way up, visit the treasury, which once housed the city’s charters, seals, and coffers. A few steps further on, we saw the impressive music drum that powers the carillon as well as the keyboard that the city carillonneur uses to play the tower’s 47 carillon bells. 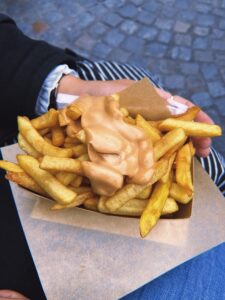 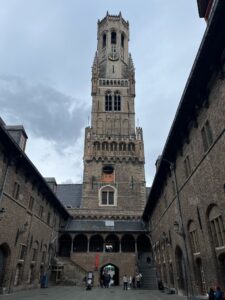 After a long and full day such as this, we deserved to enjoy the finest belgian beer. So, we went to a hidden alley in the middle of the inner city of Bruges to find “Staminee De Garre since 1984”. An establishment with its own typical atmosphere and where time seems to have stood still. We drank an amazing Tripel van De Garre (11%), a full bodied beer of high fermentation, which is rather soft and has a slightly bitter aftertaste. The brewing process of the triple goes through five stages and takes several months. It begins in the brewing room and ends in a room where the temperature is a constant 22°C.

Really happy and tired, we said goodnight to Bruges! 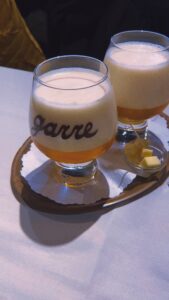