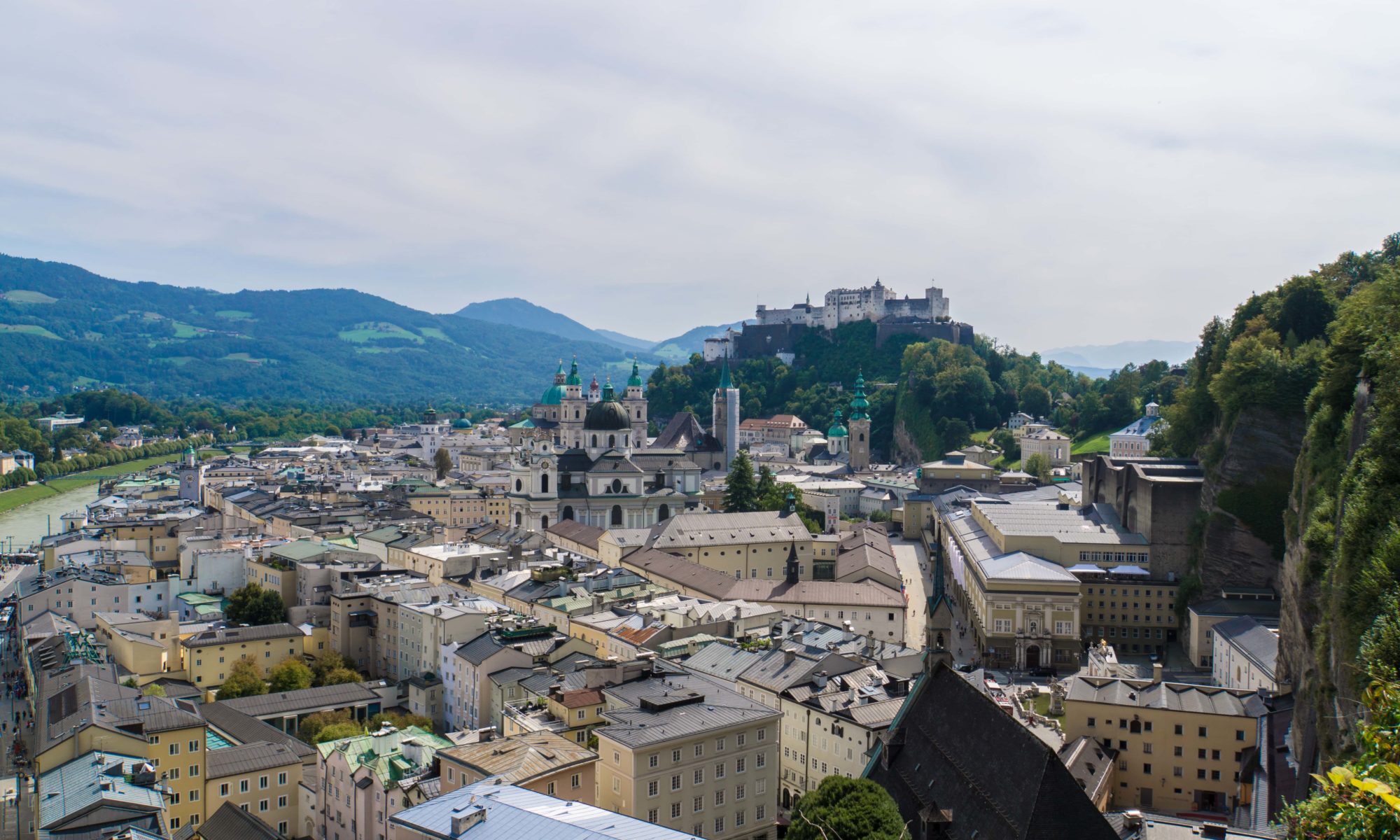 Salzburg: Start and end point of my OWHC Young Travelling trip “from the Alps to the Balkans”, city of Mozart and my chosen hometown.

This beautiful little city is dominated by the Hohensalzburg Fortress, which is located on the Festungsberg and one of Europe’s largest medieval castles. The history of the fortress dates back to 1077, when the construction began under Archbishop Gebhard von Helfenstein. From then on, it was expanded a few times until it reached today’s size and appearance in 1500. The Hohensalzburg Fortress has never been captured by foreign troops.

The cityscape is also characterized by the copper roofs of the many baroque buildings. I love this bright turquoise color of this metal when it is weathered and exposed to air over a certain period of time. Three of these turquoise domed roofs – including the biggest one – belong to the Salzburg Cathedral. Located in the middle of one part of the historic city center (the one on the left bank of the Salzach river) and made of marble from the near mountain Untersberg, the impressive Salzburg Cathedral is the most important church of the city.

On the other side of the river, where the historic city center continues, you can find another beautiful highlight of Salzburg: The Mirabell Palace with its geometrically-arranged gardens. In the off-season, the Mirabellgarten is a wonderful place for relaxing or just taking a walk through. In the summer and on weekends it’s crowded with tourists but still a beautiful place and a must-see! 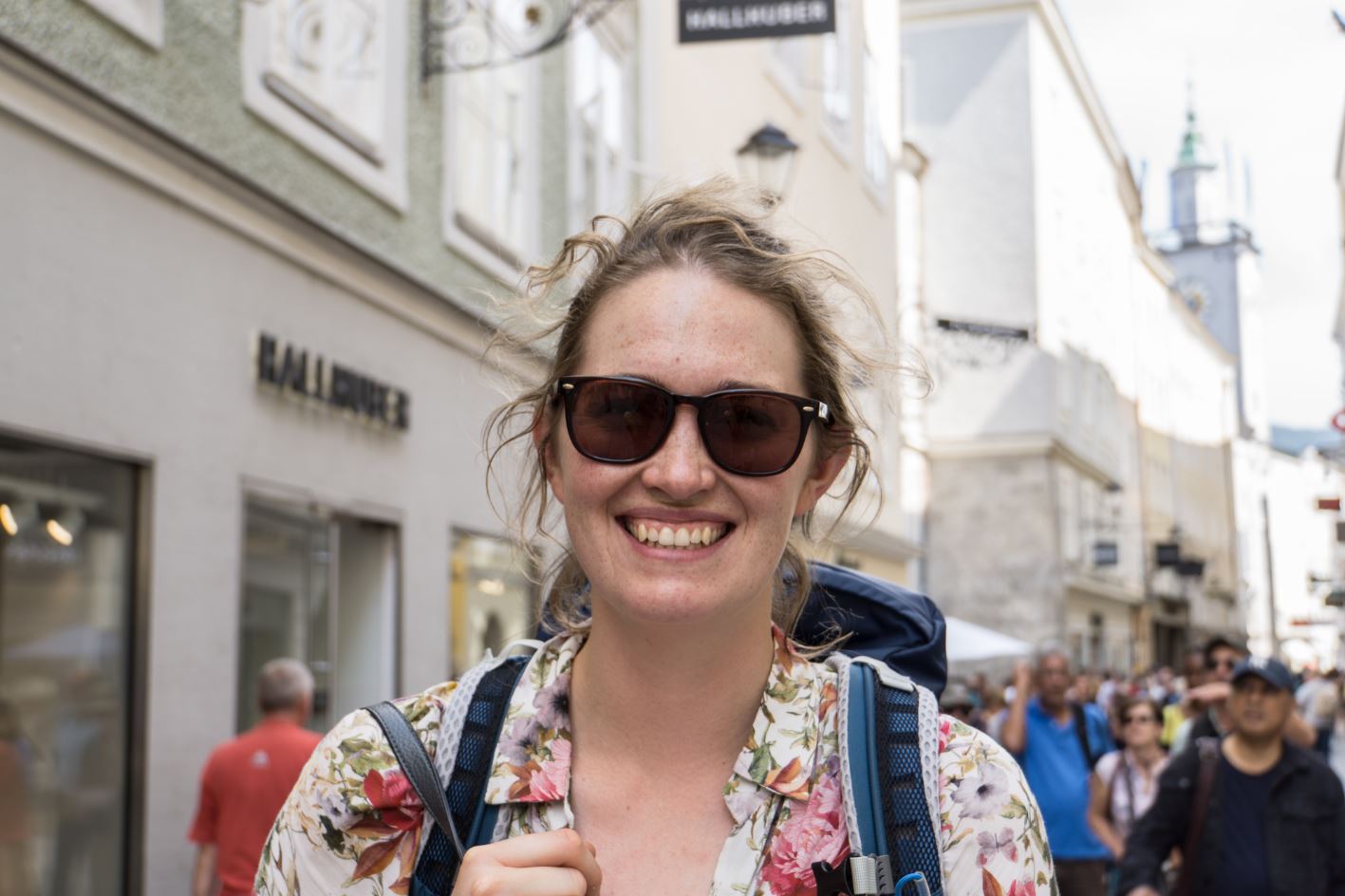 Hannah used to live in Salzburg for six years until she moved back to England three years ago – now she’s back for a wedding. When she lived in Salzburg, Hannah was annoyed by the huge number of tourists here. Now she feels like a tourist herself and tries to look on the good side:  She thinks that the city itself benefits from tourism. When it comes to sustainable tourism, Hannah thinks that it’s all about transportation. In her opinion, a trip can never be sustainable when it starts with an airplane flight.

Alexandra: Salzburg from my point of view 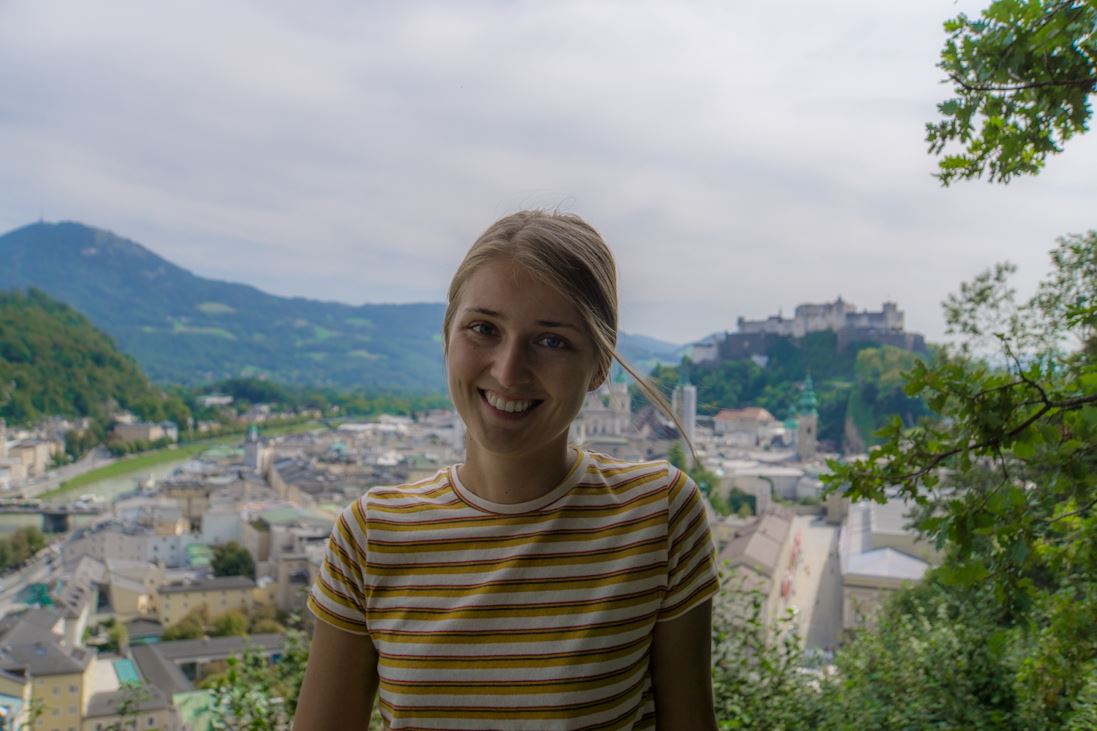 I moved to Salzburg two years ago, when I started studying communication science and later also an interdisciplinary study called philosophy, politics & economics. After two years in the city of Mozart it is still a special place to me and I am taking delight in the beauty of this city everyday.

I also love Salzburg because it is such a small town and everything is easily accessible by bike. Once I walked from my flat in the south of Salzburg to the exhibition center in the north along the Salzach river, what took me just one hour.

Also, you can enjoy nature in the near surroundings and even right in the city center, on the Mönchsberg. The 500 meters long and up to 508 meters high plateau is a popular local recreation area that can be explored along several walking trails. These trails are leading through meadows and forest, past lookout points, historical fortifications and old villas. In front of the Johannesschlössl der Pallottiner you can even find grazing cows 🙂

In Salzburg, you cannot find a big university campus but several university buildings all over the city. That’s also something I like about this city – I love to take short bike rides through the historic city center between my classes. Many of these buildings are beautiful old ones, like the one of the Faculty of Cultural and Social Sciences: hot in summer, cold in winter but just really pretty to look at.

Of course, there are also some things I don’t like about Salzburg. Actually, it’s especially one thing: the huge number of tourists. 9 million day visitors and 2,9 million overnight stays were registered in 2017. In contrast, the city of Salzburg has about 150.000 inhabitants, whereby only 10.800 (!) are living in the protected old town (>source). The results are hordes of tourists swarming through the historic city everyday, making the city look overcrowded and annoying cyclists like me by not using the sidewalks and blocking streets. Salzburg is very different at night, when all the tourists are gone or back in their hotel rooms. Sometimes you won’t meet a living soul at night and you can see only a few lights burning in the houses. This is just crazy. 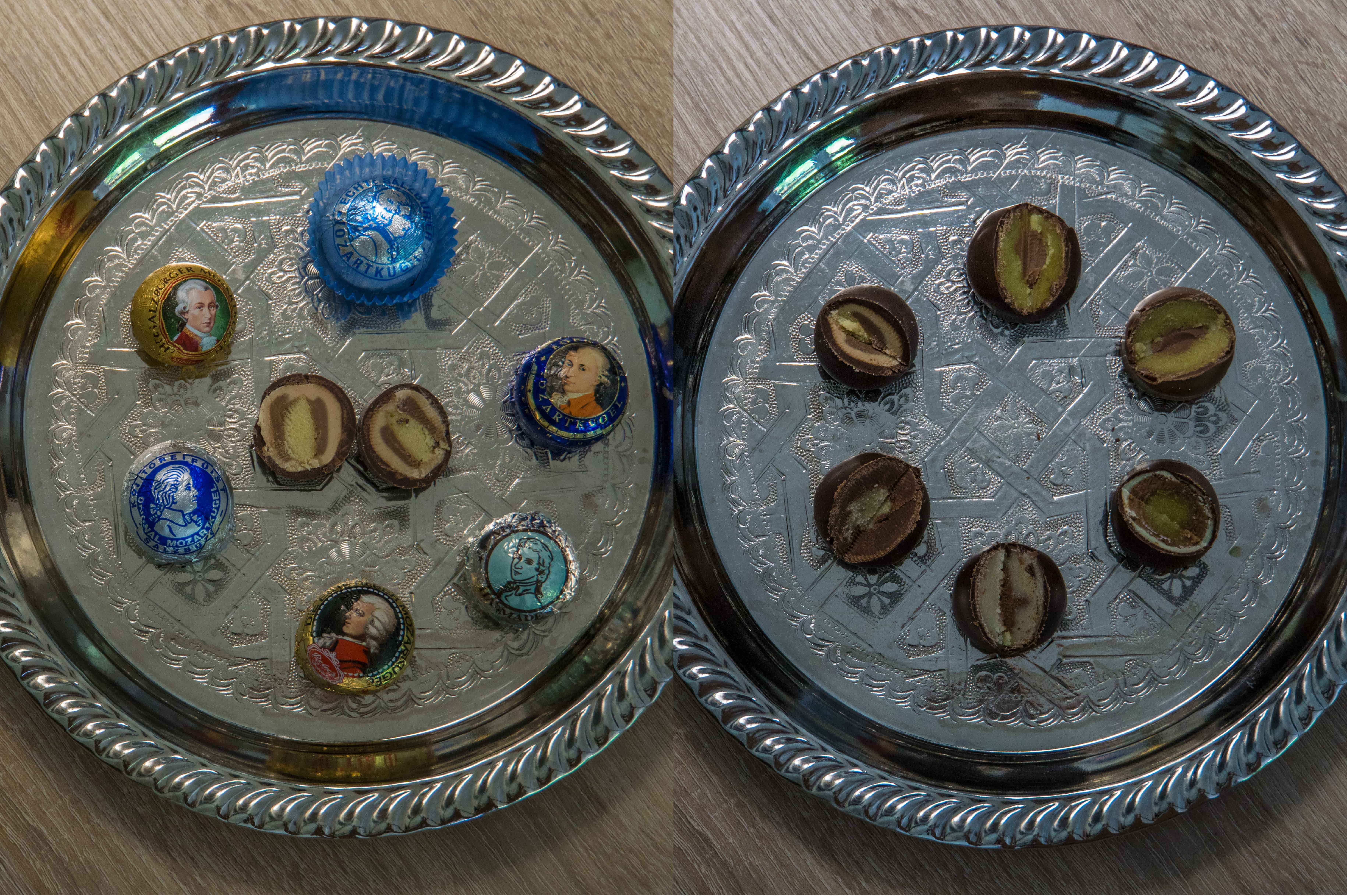 Salzburg is famous for being Mozart’s hometown and since 1890 there’s also a candy named after him: the Mozartkugel (Mozart ball). It is basically made of pistachio marzipan, nougat and chocolate, but since there are many different producers, you can also find different versions of the candy. The original Mozartkugel is the one of the confectionery called Fürst, led by the descendants of the official creator Paul Fürst – these Mozartkugeln are still handmade today (the blue one on the left in the picture). I tried them all and I liked them all, although every single Mozartkugel tastes different 🙂

Problems of Balkan countries in comparison with Austria

During my trip I realized again, how privileged I am to be born in such a beautiful, rich and peaceful country. There are a few problems Balkan countries have that are obvious to the eye when you were born in a country like Austria.

Trash
When you drive through the countryside of the Balkans, you’ll come across (unofficial) dumping grounds every few kilometers. Waste separation seems to be a foreign word in these countries. Maybe a reason for these trash filled fields and meadows is that far too much waste is produced – all the trash barrels i have seen in the streets were completely overfilled. In the supermarkets f.e., the stuff packs your purchase into free plastic bags, about three items per bag. The people always reacted pretty astonished when I showed them that I brought my own reusable shopping bag. The rivers, lakes and beaches are often completely trashed, too.

Stray dogs and cats
You see them everywhere. In the cities, in parks, along lonely as well as busy roads and even living on the dumping grounds: strays. It broke my heart to see these animals in such bad conditions. Most of the strays are friendly, not aggressive, begging for love and thankful for every single caress. It happened more than once that a dog didn’t want to leave my side after some cuddles and followed me around for hours. That was cute for the moment but it broke my heart when I had to leave them to their own devices again. Fortunately, most of the dogs I came across had an ear tag what means that they have been castrated. I don’t know if this is also done with cats. In addition to the castration, there are also some organization that try to give stray dogs a new home in Austria and Germany, f.e. Hopefully this whole problem will come to an end soon.

Missing environmentalism
That’s also one thing I noticed very soon: Most people living in the Balkan countries are just not environmentally aware. I saw countless people throwing away cans, bottles or packaging on beaches, from bridges or out of their car. I know that these countries, that are still war-damaged, have many issues to deal with, but: There is no planet B! Environment protection has to take top priority all over the world, because we have no more time to waste.